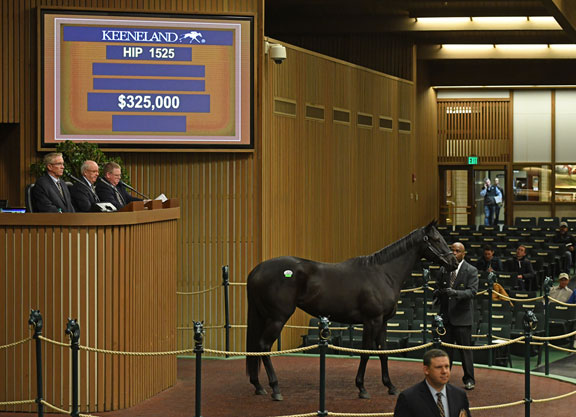 The weanling market continued to be competitive, although selective, with pinhookers dominating Sunday's trade. Renee Dailey purchased the day's highest-priced weanling, going to $250,000 for a colt from the first crop of Grade I winner Connect from the Paramount Sales consignment.

“It's tough,” Hager said of the weanling market. “We bought a couple early and then we had to sit out for a few days because it got really strong. And now we've bought into three today. So it's starting to soften up just a little bit, but the pedigrees are softening up a bit, too.”

“It is a very healthy market,” Greathouse said. “It's the age-old thing, if you've got the right horse, you're going to get plenty of money for it. Quality sells and brings plenty of money here. I think it's healthy. I just hope it continues into the Election year, that's the only thing I'm a little worried about.”

The result might not stand out on the sheets, but hip 1560 was still a notable offering. The weanling's 97-year-old breeder is the legendary Ted Bassett, past Keeneland President and Trustee Emeritus. Bassett was on hand to watch the colt sell and was welcomed back by a long string of well-wishers as he sat in the pavilion ahead of the weanling's arrival in the ring. The Summer Front colt sold for $15,000 to Equine Associates.

The Keeneland November sale continues through Sunday with sessions beginning daily at 10 a.m.

Bloodstock agent Hubert Guy, bidding on behalf of John Gunther's Glennwood Farm, struck early in Sunday's session of the Keeneland November sale to secure the unraced broodmare prospect Lark Rise (More Than Ready) for $325,000. The 3-year-old (hip 1525) was consigned by Hill 'n' Dale Sales Agency as agent for Juddmonte Farms, which had purchased her for $550,000 at the 2017 Keeneland September Yearling Sale.

“[Gunther] loved the mare and he went back to Vancouver, so he asked me yesterday to bid for him,” Guy said. “I had him on the phone and he wanted her.”

Lark Rise is a daughter of Tare Green (Giant's Causeway), a half-sister to Leroidesanimaux (Brz) (Candy Stripes). Tare Green is also the dam of Ocean Atlantique (American Pharoah), a 1.1-million euro Arqana May Breeze-Up purchase this year who was tabbed a 'TDN Rising Star' following his maiden score at Saint-Cloud in October.

“She's a very nice mare,” Guy said. “Physically, she looks like a real quality horse. She's got a beautiful coat and she was very well-presented by Juddmonte and Hill 'n' Dale. She looks like she has a great temperament and she has a good size on her, which should be great to carry babies.”

A colt from the first crop of Connect attracted a host of admiring bidders before ultimately selling to Renee Dailey for $250,000 Sunday at Keeneland. Dailey was bidding on behalf of a pinhooking partnership which will look to reoffer the youngster at next year's Fasig-Tipton Saratoga Yearling Sale.

“I thought he was a very good-moving, scopey, beautiful colt who I feel still has a lot of upside for us,” Dailey said after signing the ticket on hip 1735. “I actually had Connect as a weanling and sold him in July as a yearling–he was one of the first horses I prepped. I've been looking for the best one and I think I got it.”

Dailey added, “He will probably go to Saratoga-that will be the plan.”

The weanling is out of Wild Hoots (Unbridled's Song) and is a half-brother to Grade I placed Savings Account (Medaglia d'Oro). He was bred by Dell Ridge Farm and was consigned by Paramount Sales.

“I've been looking at all of them,” Dailey said of Connect's first crop of weanlings. “I'm very excited about the way they look as weanlings. There are a lot of them that were very desirable and I did bid on others, but I am glad I waited until now for this one.

Connect had a lot of scope. He looked like a racehorse. And some very astute people bought him in July. Hopefully they'll be around next year to look at them as yearlings. But I am very pleased with the way they look; I'm very excited about the Connect babies.”

Of the weanling market at Keeneland this week, Dailey said, “It's very strong. It's hard to buy. The good ones are still selling very well. That's encouraging for us moving forward. I've gone very hard at a lot of weanlings this week and this is the one that I got the 'must buy' on.”

A pair of weanlings by GI Kentucky Derby winner Street Sense led the foal list throughout the early going of Sunday's fifth session of the Keeneland November sale.

Bloodstock agent Phil Hager made a final bid of $185,000-second highest of the day for foals–to secure a weanling colt by the Darley stallion on behalf of a pinhooking partnership. The bay colt was bred by Adrian Regan and was consigned by Hunter Valley Farm.

“We are probably going to sell him next year, that's the game plan,” Hager said. “He's a pretty colt, so hopefully we'll have a few options on where we want to go with him.”

Hip 1689 is out of Take a Memo (Empire Maker), a daughter of graded stakes winner Memorette (Memo {Chi}). The 10-year-old mare, with the Street Sense colt in utero, sold for $50,000 to E.M.H. Bloodstock at last year's Keeneland November sale.

“He's a very two-turn looking colt, with a pretty head and a nice neck,” Hager said of the weanling. “He was everything we were looking for.”

John Greathouse of Glencrest Farm made a final bid of $160,000 to secure the day's highest-priced weanling filly, a bay daughter of Street Sense (hip 1594) from the Hidden Brook consignment.

“We plan to pinhook her,” Greathouse said of the weanling. “We've got a little group together and that's kind of what we do at this point. But she's a nice enough horse that we wouldn't mind racing her either.”

The May 1 foal is out of One Look (Henny Hughes), a half-sister to graded placed Before You Know It (Hard Spun) and Instant Reflex (Quality Road).

“Everything,” Greathouse said when asked what he liked about the filly. “She is very forward for a May foal, with plenty of leg. I thought she was a nice, correct filly who will just improve. In spring when the green grass hits, I think she's just going to get better and better.”