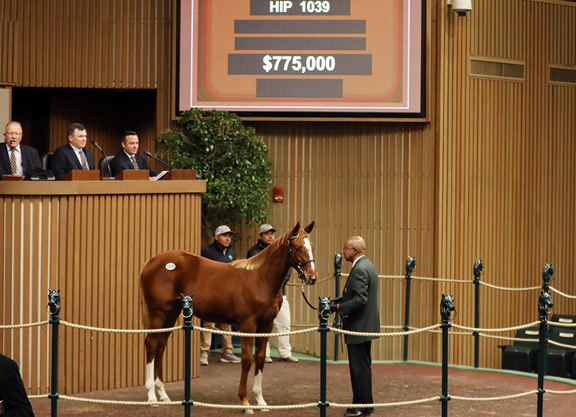 LEXINGTON, KY – The Keeneland November Breeding Stock Sale concluded its Book 2 section Friday in Lexington and figures remained in line with the auction’s 2018 edition. Larry Best continued to make his presence felt, going to a session-topping $775,000 to acquire a weanling filly by Curlin from the Indian Creek consignment.

“The quality today was similar to the quality yesterday,” said Keeneland’s Director of Sales Operations Geoffrey Russell. “I thought we had a good cross-section of international and domestic buyers. The international buyers are still here, some Japanese, some Europeans. The foal market was very strong today, spread between end-users and pinhooking partnerships. Overall, I think Book 2 ended pretty well.”

“They had a little bit of age on them, but they are good mares for stallions owners to take to a first-season sire,” Russell said of the Live Oak duo. “They are multiple stakes producers and we are very pleased Mrs. Weber offered them here. I think the market respected them greatly.”

“It’s very difficult to buy in this market,” said bloodstock agent Mike McMahon. “It is a good time to sell foals. There don’t seem to be as many on the market as usual. Breeders may be keeping some. Mares are difficult to find. I have only bought one so far and here we are on the second day of Book 2. It is hard.”

The Keeneland November sale continues through Nov. 17 with sessions beginning daily at 10 a.m.

OXO Equine’s Larry Best has been quite active throughout both November Sales this week and despite being noticeably absent at Keeneland Friday, he still made his presence felt, going to a session-topping $775,000 for a weanling filly by Curlin (Hip 1039). Taylor Made’s Mark Taylor did the bidding with Best on the phone and Stonestreet’s John Moynihan was the underbidder.

“[Best] had already looked at her before he left,” Taylor said after signing the ticket. “She is a nice filly. We loved her. She had a great walk.”

Indian Creek raised and sold the chestnut filly on behalf of breeder Peter Redekop and the operation’s president Shack Parrish said she had always been a standout.

“She has always been very nice and straight forward,” said Parrish. “Up here, she has been an angel. She showed in the rain all day [Thursday] and it didn’t affect her.”

The horseman continued, “Special thanks to Alistair Roden, who represents Mr. Redekop. It was huge for us and our team at home [to top the session]. We have been number two in a few sales this year. This is big for our management team and the team at home. They do all the work. I don’t do anything but drive up here, get out of the car and carry a book with me.”

Roden echoed Parrish’s comments on the filly, adding that Mr. Redekop was very happy with her sale.

“She was an early foal and they do such a wonderful job at Indian Creek,” Roden said. “She has been a superstar right from day one. She has been fantastic.”

A half to two stakes winners, Fly to the Stars is also responsible for GSW The Tabulator (Dialed In) and SP Star Via Strada (Street Boss). Her now 3-year-old Annie Go Lightly (Take Charge Indy) brought $200,000 at the 2017 Fasig-Tipton October Sale and broke her maiden by almost 20 lengths earlier this summer. The chestnut also has a juvenile filly named Fly Away (Street Boss). —@CDeBernardisTDN

It is not often breeders have the chance to purchase a producer of four black-type horses in foal to one of the hottest stallions in the country, but Keeneland buyers had just that in Slewfoundmoney (Seeking the Gold) (Hip 826), who was offered pregnant to Into Mischief. Many flocked to her, but it was Arthur Hoyeau left holding the ticket on a final bid of $585,000 for the 15-year-old mare from the Warrendale Sales consignment.

“She will stay in Kentucky,” said Hoyeau. “She was bought for a new client. She is already in foal to a very hot sire and has been a good and consistent producer. She ticks all of the boxes.”

A MSW & MGSP herself, Slewfoundmoney proved to be just as talented in the breeding shed, producing GSP Souper Lucky (Giant’s Causeway) right off the bat. Her next foal was MGSW & MGISP millionaire Awesome Slew (Awesome Again). The dark bay produced MSW He’s Bankable (Arch) two years later and is also responsible for the SP 3-year-old Souper Jackpot (Ghostzapper). She had a Tapit filly in 2018 and an Into Mischief filly this year. —@CDeBernardisTDN

China Horse Club concluded its broodmare purchases for the year with the acquisition of Daveron (Ger) (Black Sam Bellamy {Ire}) (hip 989) for $550,000 at Keeneland Friday. The 14-year-old mare, in foal to Uncle Mo, was consigned by Warrendale Sales on behalf of Live Oak Stud.

“She’ll stay here in the States,” China Horse Club’s Michael Wallace said after signing the ticket on the mare. “No mating decided as yet. She’ll probably finish us up for buying this year, so we’ll sit down and work out these last few matings for these American mares.”

Charlotte Weber’s Live Oak Plantation purchased Daveron for $750,000 at the 2011 Keeneland November sale, following a season in which the German-bred had won the GII Ballston Spa S. and GIII Beaugay S. and was third in the GI First Lady S. Retired after making one start in the Live Oak colors, she produced GII Wise Dan S. winner March to the Arch (Arch) and GIII Marine S. winner Global Access (Giant’s Causeway. She has a yearling colt by Kitten’s Joy and a weanling filly by Quality Road.

“She’s off to a great start,” Wallace said. “She obviously ran herself and she’s done the job already. There wasn’t much not to like really. If she puts out a good foal, you’re out in one hit.”

Warrendale Sales consigned the two top-priced mares of Friday’s session. Also on behalf of Live Oak, the operation consigned Slewfoundmoney (Seeking the Gold) (hip 826) who sold for $585,000 to Arthur Hoyeau.

“We’re very happy with those results,” said Warrendale’s Hunter Simms. “We appraised them right around that number right around entry deadline for the sale when Live Oak asked us to appraise them. They are such great producers and they were both good race mares. What they have produced and who they were in foal to sold them. They were both very nice offerings.” @JessMartiniTDN

Multilingual Heads Back to Europe

Multilingual (GB) (Dansili {GB}), a half-sister to multiple Group 1 winner and hot young sire Kingman (GB) (Invincible Spirit {Ire}), will be returning to Europe after Oliver Sangster signed the ticket on the 7-year-old mare at $525,000 early in Friday’s session of the Keeneland November sale. In foal to Noble Mission (GB), Multilingual (hip 734) was consigned by Mill Ridge Sales on behalf of breeder Juddmonte Farms.

“The page, of course,” Sangster said of the mare’s appeal. “Her half-brother is making waves back in Europe and looking like the real business as a sire. It’s a beautiful Juddmonte family.”

Sangster, who said he was making the purchase on behalf of his father Ben Sangster, is the grandson of the legendary late owner-breeder Robert Sangster.

“To be honest, we thought she would make a bit more,” he said. “You are never too sure how to value these massive pages. Time will tell whether it’s a good price or not, but it’s nice to get on the sheets.”

Multilingual made only one racetrack start. She has produced three colts to date; a First Defence 2-year-old; an English Channel yearling; and a Kitten’s Joy weanling.

“It’s Juddmonte. To get into that kind of family is truly a gift,” said Mill Ridge’s Headley Bell. “Those guys consider it an opportunity and it is. We had had a couple of foals, people think they are exposed, but the fact is that she had a fantastic Kitten’s Joy foal. It was opportunity. Juddmonte is magic and people like to be a part of it.”

Arrogate Filly to Return to the Sales Ring

Hip 704, a daughter of champion Arrogate (Unbridled’s Song), proved quite popular early in Thursday’s session, hammering for $425,000. However, buyers will have another opportunity to acquire the filly, as she was purchased by McMahon and Hill Bloodstock on behalf of their Spruce Lane pinhooking partnership.

“Jamie Hill and I organize a pinhook group every year for high-end fillies and colts and she certainly fit the bill,” said Mike McMahon. “We have been getting shut out, so it is nice to get a high-quality one early on today.”

When asked what he liked about the filly, McMahon said, “Everything. The farm manager John Durr told us what an aggressive horse she was in the field and how on top of everything she was. That is my kind of horse, I love that.”

The gray filly is a member of the first crop of Eclipse winner, four-time Grade I scorer and over $17-million earner Arrogate.

“We have tried to buy three Arrogates,” McMahon said. “I am really impressed by them. I think he has a very real chance to be a super sire.” —@CDeBernardisTDN