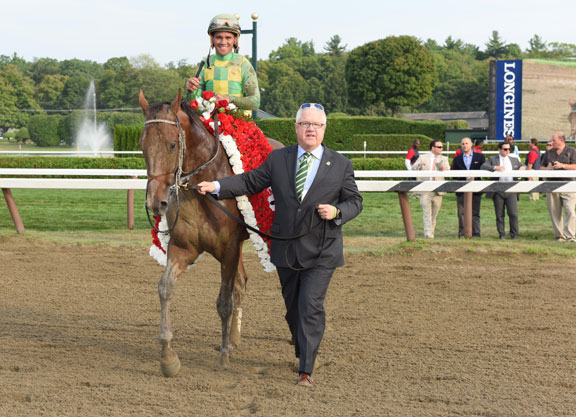 Donegal Racing's 2015 GI Travers S. hero Keen Ice (Curlin) has been transferred from trainer Dale Romans to Todd Pletcher. The bay was seventh in the G1 Al Maktoum Challenge Round 3 at Meydan Mar. 5, and was last seen finishing eighth in the G1 Dubai World Cup three weeks thereafter. “For us, this is kind of business as usual,” explained Donegal President Jerry Crawford. “We move horses from one trainer to another pretty regularly–we've moved horses to Dale from other trainers, and from Dale to other trainers. Our theory is that if an athlete's not doing well in a particular system, let him try another system and see if we can get the best out of him. That's really all this amounts to–seeing if Todd can get 'Ice' back to the level he was performing at in the middle of 2015.” Keen Ice was third in last June's GI Belmont S. and second in the GI Haskell Invitational S. in August–both behind Horse of the Year and Triple Crown winner American Pharoah (Pioneerof the Nile)–before handing that runner his only loss of the season in Saratoga's Travers S. in August. He was fourth in both Keeneland's GI Breeders' Cup Classic Oct. 31 and Churchill's GI Clark H. Nov. 27, and was sixth as the favorite on seasonal debut in Gulfstream's GI Donn H. Feb. 6. Crawford said that Keen Ice would need some time off after his trip from Dubai, and would wait to commit to any future objectives. “It goes without saying, we'd love to run him at Saratoga again and we'd love to see him in the [GI] Breeders' Cup Classic again, but that's very premature until we see how he's doing and what he tells us about timing,” he said.