Keen Ice Preps for the Donn 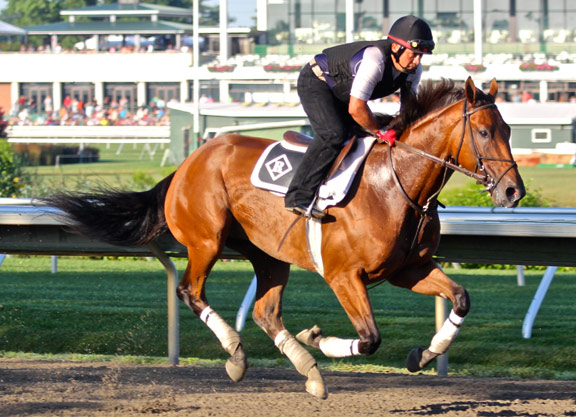 “He went well,” remarked conditioner Dale Romans when reached by phone Tuesday. “He just went nice and easy. We are pointing towards the Donn right now.”

The hulking bay followed his upset of Triple Crown hero American Pharoah (Pioneerof the Nile) in the Aug. 29 Travers with fourth-place efforts in both the GI Breeders' Cup Classic Oct. 31 and the GI Clark H. Nov. 27.

Fellow Romans trainee Cherry Wine (Paddy O'Prado) also breezed five furlongs in Hallandale Tuesday, covering the distance in a bullet :59.87. Owned by Frank Jones Jr. and William Pacella, the juvenile donned cap and gown by 9 1/4 lengths at fifth asking at Churchill Downs Nov. 28 and is pointing towards an allowance race for his sophomore debut.

“We wanted a little more out of him,” Romans said. “He is going to run a little sooner. Keen Ice's race is still a little ways away and we are going to take it easy for another work or so.”

“She ran a big race,” Romans commented. “I certainly thought she was capable of that, but you never know if they are going to put it all together. She's a class act who does everything right and I was very impressed.”

The trainer continued, “I haven't seen her, but they tell me she came out of the race great. We are going to leave her out there for the winter. There are about three spots she can run in and hopefully she can repeat. There is another seven-eighths race [the GII Santa Monica S. Jan. 23] that is a possibility.”