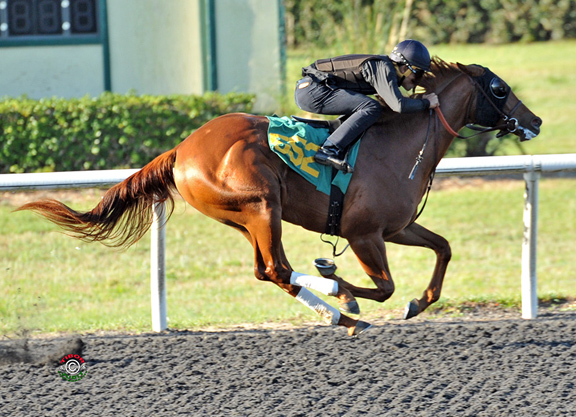 A colt by Kantharos set the fastest quarter-mile time of the day, while four juveniles equaled the swiftest furlong time as the under-tack show of the Ocala Breeders' Sales Company's April Spring Sale of 2-Year-Olds marched through its third of six sessions Wednesday in Central Florida.

Hip 531, a son of Kantharos, earned Wednesday's quarter-mile bullet when covering the distance in :20 4/5. Consigned by de Meric Sales, the chestnut is out of the unraced Jungle Love (Friendly Lover), a half-sister to Grade I winner Set Play (Van Nistelrooy). De Meric and Machmer Hall signed the ticket at $9,000 to acquire the youngster at the 2017 Keeneland January sale.

Kantharos, who began his stud career in Florida before relocating to Hill 'n' Dale in Kentucky last year, was also represented by one of the co-fastest furlong workers of Wednesday's under-tack session. Hip 552, a colt by the graded-stakes winning sire, covered his furlong in :9 4/5. The juvenile is consigned by Off the Hook LLC on behalf of his breeder, Hernando and Nerina Gutierrez's P&G Stables.

“We knew he was fast. He'd been fast on the farm,” Off the Hook's Joe Appelbaum said Wednesday afternoon. “But you never really know until they lay it down exactly what time they are going to do. We weren't surprised by the fast work, but we're always delighted to have a bullet.”

The Gutierrezes purchased Pugilistic (Maria's Mon), with the colt's dam in utero, for $8,500 at the 2008 Keeneland November sale. The couple named the filly La Catira Jatar (Best of the Bests {Ire}) after Hernando's grandmother and, while she never made it to the races, the bond was formed.

“La Catira Jatar is named after his grandmother and, while the pedigree was originally a little light, they could never give up on it because of that connection,” Appelbaum, who campaigned Grade I winner Turbo Compressor (Halo's Image) with P&G Stables, said. “Obviously since three years ago when they made the decision to breed to Kantharos, he has really come along as a sire. He was back at Ocala Stud then. And this horse has developed exactly the way you'd want him to. He's a typical Kantharos. He's a really nice size, lanky with a languid walk. I was happy, not just with the time of his work, but the visual as well.”

Kantharos has been represented this term by graded stakes performers X Y Jet, Bucchero and World of Trouble. Appelbaum said he has been impressed by the stallion's consistency.

“My impression of him is that he's someone who gets runners,” Appelbaum said of Kantharos. “A lot of them seem to get to the track. A lot of them seem to run and compete, which is all too rare in our game today. It seems a lot of stallions are too boom or bust. But Kantharos seems to get a lot more runners, guys who are out there all the time running for their owners. That is something that is underrated in our modern game.”

While Monday's first session of the under-tack preview was hampered by heavy winds, the last two sessions have been fairly consistent, according to Appelbaum.

“For the most part, our fast ones breezed fast and our slow ones breezed slower,” he said. “I have no complaints about the track. Obviously, the first day there was a very significant headwind, but the distribution is pretty similar to normal and that will probably benefit the astute buyers who can figure that sort of thing out. That's why it's a horse sale.”

Also sharing the furlong bullet time of :9 4/5 Wednesday was hip 478, a filly by Strong Mandate out of stakes winner Holy Reina (Macho Uno). Consigned by Niall Brennan Stables, the chestnut filly is from the family of Flanders, Surfside and Battle Plan. Bred by Three Chimneys Farm, she sold to Cromwell Bloodstock for $100,000 at the 2016 Keeneland November sale and RNA'd for $135,000 at last year's Keeneland September sale.

Paul Sharp sent out hip 606, a filly by Into Mischief, to share the :9 4/5 bullet Wednesday. The bay is out of Loveofalifetime (Medaglia d'Oro), a half to graded stakes winners Savorthetime (Gilded Time) and Rogue Romance (Smarty Jones). The juvenile was bred by Runnymede Farm and Catesby W. Clay Investment 2.

Completing the quartet of :9 4/5 workers, and the fifth to hit that mark this week in Ocala, was hip 589, a filly by Sidney's Candy. Consigned by Hemingway Racing and Training Stables, the bay is out of the unraced Like a River (Danzig), a half to Grade I placed Like a Hero (Pleasant Colony). The youngster was bred by Helen and Joseph Barbazon and he was purchased in utero for $12,000 at the 2015 Keeneland November sale.