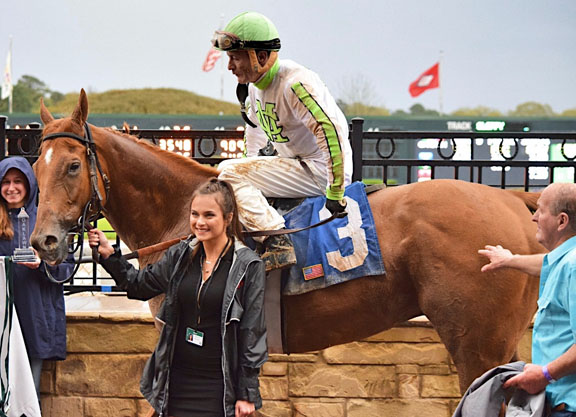 Carson McCord became a first-time racehorse owner when she claimed K J’s Nobility (Primary Suspect) back in 2018, and the 6-year-old gelding, trained by Cecil Borel and ridden by Calvin Borel, gave the 20-year-old college sophomore her first stakes win when he came home first in the Nodouble Breeders’ S. at Oaklawn Park Mar. 29.

“We’d been waiting for that race since last year,” McCord recalled. “We were really ready and pretty confident going into the race, which made us pretty nervous. I couldn’t breathe until he passed the finish.”

McCord grew up not far from Oaklawn Park and developed her love of the sport during days spent at the track with her father, Bill McCord.

“Oaklawn is about 10 minutes from where I grew up, so growing up I used to go to the track all of the time,” McCord said. “My dad used to breed horses and owned horses. Cecil was his trainer for most of his career, too. So I grew up around them and grew up hanging out with them. And once I got into highschool and was old enough to start handicapping and reading the Racing Form, I fell in love with gambling and watching the horses run and the animals themselves. It started out just as more of a bonding thing and then I really fell in love with the sport and wanted to participate myself. ”

As she prepared to graduate from Lake Hamilton High School in 2018, McCord began thinking seriously of starting her own racing stable.

“I started saving up-my grandparents own a lot of businesses around here, as well as my parents, so I worked all through high school,” she said. “When it came time to graduate, I said, ‘You know what, I think I want a horse.'”

“We have a box at Oaklawn and Scott’s stepdad had the box right beside us,” McCord said. “So he and my dad became really good friends. They were looking for horses to claim and I wanted to get into the business. We saw him and we saw he was Arkey-bred. Oaklawn is my home track-it’s what is most important to me. So we claimed him.”

K J’s Nobility finished fourth in last year’s Nodouble Breeders’ S. before switching to the Borel barn and he has hit the board in each of his last eight races with four wins.

“He ran pretty good for the beginning part of when we had him,” McCord said. “But then when Cecil got a hold of him, he’s hit the board every single time. He’s really got that horse in shape. He’s only improved and he’s doing great now, too.”

McCord is currently a sophomore at Chapman University in suburban Los Angeles studying business management with an emphasis on finance. She made it home for the Nodouble just ahead of the quarantines.

“I came home Mar. 13,” McCord said. “School got cancelled the day before that. And all of our classes were moved online, so I flew home immediately for the races. And then when I got home, they stopped having spectators at the races as soon as I got here. So I am here until the end of the meet because I don’t have classes.”

Favored at 9-5 in the six-furlong Nodouble, K J’s Nobility rolled to a three-length victory under Calvin Borel.

“I was at the track with my grandparents, so we got to watch it outside with Cecil and Renay, Calvin’s wife,” McCord said. “It was great because Renay and Calvin have both worked on the horse, as well as Cecil. So everyone who was there was very attached to the horse. There weren’t many people there, so it was nice to be able to watch him in person.”

K J’s Nobility represented McCord’s 11th victory from 52 starts overall and pushed her career purse earnings to $406,911. The Nodouble victory moved her to five for eight for the Oaklawn meeting.

“I’ve had some claimed from me recently, but right now we have four in training,” McCord said. “And then I have two at the farm. They just turned three this year. We got them at a yearling sale, so we’ve had them for a while and they are still kind of growing and developing. We tried to get them ready for Oaklawn, but they just weren’t ready yet.”

She continued, “I definitely want to grow in the sport, but only slowly. I am only 20 years old, so I have plenty of time. Maybe long-term I’d like to breed horses, but that’s years away. For now, I just like to claim horses. I would be interested in the 2-year-old sales, but we’re just taking it slow right now.”

It was her father who first introduced her to racing and nurtured her love of the sport and her experiences are still centered around family.

“The Borels are really family to me, so it’s really nice whenever you get to share your love for something with someone like that,” she said. “Calvin and Cecil have been around for a while and they have been really good friends with my dad since the beginning of time. It’s been really nice to be able to celebrate with all of them and share the experiences with them.”

McCord will look to double her stakes wins when K J’s Nobility makes an expected start in the $165,000 Arkansas Breeders’ Championship at Oaklawn May 1.