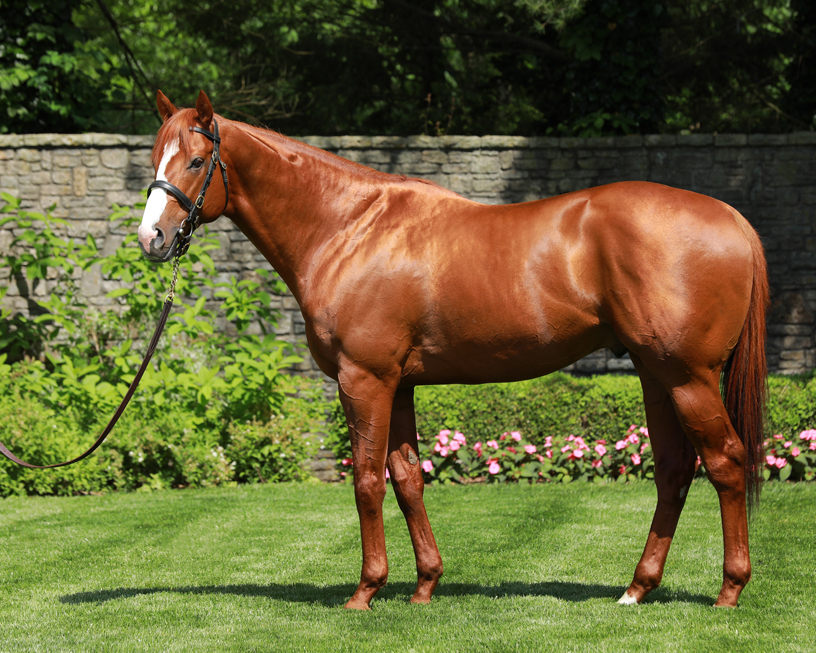 Ten sons and daughters of Triple Crown hero Justify are currently slated to go to the ring at the Fasig-Tipton Saratoga Select Sale.  | Coolmore

The energy seems to be building by the hour now that the Fasig-Tipton Saratoga Select Sale yearlings are in place as buyers sift through the barns surrounding the famed Humphrey S. Finney Pavilion. There's much to look forward to in this 100th edition of the auction, including a sample of the highly-anticipated first crop of yearlings from Triple Crown champion Justify (Scat Daddy – Stage Magic, by Ghostzapper).

With 10 sons and daughters of Justify currently slated to go through the sales ring, these youngsters represent the first book of mares the undefeated champion filled during his introductory year at Ashford Stud. The son of Scat Daddy bred 474 mares in his first two seasons with a $150,000 stud fee.

“The quality of mares that Justify has covered has been second to none,” Coolmore's Adrian Wallace said. “He covered over 70 Grade I winners or producers in his first book and the quality really hasn't changed in the subsequent two books. He's a horse that was obviously brilliant on the racetrack and he's been brilliant at stud as well. We're now getting ready to see that as the sales start. These pedigrees are replete with quality, which is what you'd expect for a horse of Justify's caliber.”

The hulking chestnut was an easy sell for breeders in his first years at stud, not only because of his accomplishments on the track but also for his eye-catching physical.

“He's a very big, imposing horse,” Wallace said. “He was a $500,000 Keeneland September graduate, so obviously a very good-looking horse. He's very correct, a good mover who stands over a lot of ground, and has a great shoulder and hip.  He's very American in the way he looks. He's one of those horses that when you see him, he's captivating.”

Campaigned by China Horse Club, Head of Plains Partners LLC, Starlight Racing and WinStar Farm, Justify took over the 3-year-old division by storm in 2018. From a nine and a half-length, 'TDN Rising Star'-worthy debut victory to a triumph over dual GISW Bolt d'Oro in the GI Santa Anita Derby to securing his place in the record books with his Triple Crown win, Justify retired after his Horse of the Year campaign with a perfect six-for-six record.

“The thing about Justify was that everything he did was with ease,” Wallace explained. “He was an efficient, fluid mover with a huge turn of foot. He had the stamina to last the one and a half miles of the GI Belmont S., but also a horse that was good just over a mile. He had the speed, the stamina and the quality. He had every single attribute you would hope to have and he's a great embodiment of what Scat Daddy was.”

A member of the second-to-last crop of Scat Daddy, Justify was one of four sons of the brilliant Coolmore sire in the field for the 2018 GI Kentucky Derby and is now one of five sons representing Coolmore at stud both in America and Ireland.

“One of the things I'll always remember is when we were looking at this crop of Scat Daddy that included Mendelssohn and Justify, [Coolmore's] Paul Shanahan said to us that we were only just now beginning to realize how much of a loss Scat Daddy was to us,” Wallace recalled. “The horses in those final two crops were amazing athletes, as that was when he was only just starting to get his really good mares.”

As Wallace has overseen the early development of Justify's first crop, he said he has noticed similar trends with the yearlings from the Triple Crown hero and his sire.

“I won't say that Scat Daddy didn't stamp his horses, but it's a trait of the Scat Daddy line that they're all different,” Wallace said. “We stand three sons of Scat Daddy here and all three are exceptionally different in every way. Justify is 17 hands, stands over an enormous amount of ground and is a big, athletic son. Mendelssohn is more medium-sized, a very good mover and very correct. Then Caravaggio is 15.3 ½ and is much more of a sprinter type. They're all very athletic, good-looking horses, but I don't think you'll find one particular type.”

The same, he noted, can be said of Justify's yearlings, although there are some consistencies he has noticed.

“A lot of Justify's yearlings are quite different, although they tend to be a very good size, are easy movers and are generally correct. There's no real type yet and that may also stem from the fact that he was tried with a lot of European-line mares. He was bred to American-line mares, but also a lot of daughters of Galileo.”

Two Justify yearlings out of mares by the late Galileo will be offered at the Fasig-Tipton Select Sale.

Hip 10 is a son of the successful Aidan O'Brien-trained Together (Ire), winner of the 2011 GI Queen Elizabeth II Challenge Cup S. The mare is responsible for two stakes-placed horses, as well as an Uncle Mo filly named Thrilling who broke her maiden at Santa Anita in May this year. The colt will be consigned by Hill 'n' Dale Sales.

Hip 83, an Irish-bred filly consigned by Eaton Sales, is the first foal out of stakes-winning mare Easter Lily (Ire), a full-sister to another regally-bred stakes winner Circling (Ire).

“This filly is one-of-a-kind at Saratoga,” said Eaton's Reiley McDonald. “She's a big, strong, beautiful filly with a lot of leg, great scope and a good hip, shoulder and length of back. She looks like a two-turn horse and has all the ingredients that made her father so great.”

McDonald spoke on the rare pedigree the filly has to offer.

“This filly provides American breeders a really unique opportunity to have a daughter of an American sire out of a Galileo mare,” he explained. “We don't get these kind of European families very often in America and that makes this filly really special. I think more American breeders need to capitalize on the Galileo mares. He provides stamina, toughness and heart and to introduce that into our American pedigrees is going to be a really great thing going forward.”

McDonald said he has found a consistency in the Justify yearlings he has worked with thus far.

“The one thing that I find with all the Justify yearlings is their size and scope,” he said. “They also have the great walk and big shoulder their father has and will really be a great Classic-type horse for American racing.”

Another Justify yearling with a high-profile pedigree at Saratoga is Hip 41, a colt out of Grade I winner and producer Appealing Zophie (Successful Appeal). The half-brother to three stakes winners, including GI Belmont S. winner and first-crop yearling sire Tapwrit, is also consigned by Eaton Sales.

“He's a horse that should be very, very popular at the sales,” Wallace said. “He stands over a lot of ground, is a very good mover and is very athletic. If you look at him move, he really does fill the eye and he's got a great presence about him.”

At the Fasig-Tipton New York-Bred Sale, a filly out of SP Southern Charmer (Dixie Union) will sell as Hip 571.

With first yearlings this year, Justify's colt out of GISW Zipessa (City Zip) brought $1.8 million to Kaneko Makoto Holdings from Shadai Farms at the Japan Racing Horse Association Select Sale. His only yearling at the Fasig-Tipton July Sale, a filly out of GISW Emma's Encore (Congrats), sold for $210,000.

“The market is judging them very well,” Wallace said. “He has a very strong group of yearlings going to Saratoga and I think they are very indicative of the horse's quality and the type of mares he bred. Hopefully we'll see some fireworks in the next few weeks.”