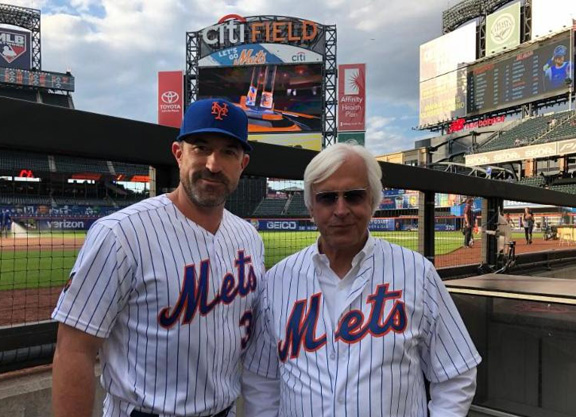 “Justify has drawn the rail,” Collmus said of the GI Kentucky Derby and GI Preakness S. hero as the big crowd of media and horsemen assembled let out a couple of oohs.

Hall of Famer Bob Baffert could join the legendary “Sunny Jim” Fitzsimmons as the only two trainers to campaign multiple Triple Crown winners.

“I never do like to draw the rail,” said Baffert before throwing out Tuesday night’s first pitch at the Mets vs. Orioles game. “Most importantly, the horse is doing well. You can have a great post, but if you don’t leave there, you’re in trouble. We have it [rail draw], we can’t change it, so we’ll just deal with.”

Baffert made three Triple Crown attempts before finally achieving racing’s most difficult feat ending a 37-year drought with the brilliant American Pharoah in 2015.

“I’m very fortunate,” Baffert said. “This is my fifth time going through this. It never gets old. Once Pharoah did it there was a sense of relief that it can happen if you have the right horse and right circumstances. Now, we’re coming in here with another great horse that’s been phenomenal to date and just keeps bringing it. The races haven’t taken a toll on him. He looks strong.

Baffert continued, “There’s an excitement in the air coming in here, but we know it’s going to be tough. Right now, we’re just going to enjoy the moment and hope that if it’s meant to be, it’s meant to be.”

Nine rivals will be standing in the 4-5 morning-line favorite’s way, including 9-2 second-choice Hofburg (Tapit) (post four), second in the GI Florida Derby and a troubled seventh in the Derby. The other runners in single digits and both at 8-1 on the morning line are Preakness runner-up Bravazo (Awesome Again) (post three) and GII Wood Memorial S. victor Vino Rosso (Curlin) (post eight).