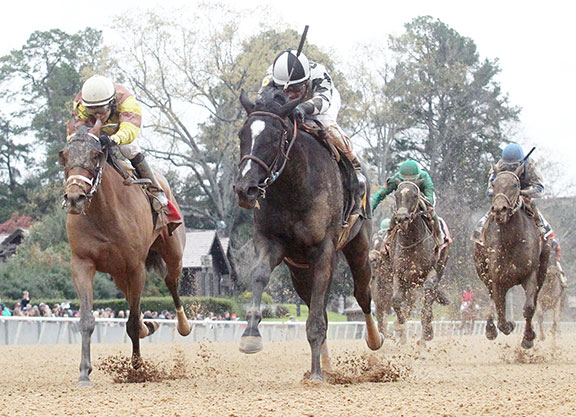 A trio of well-bred colts meet in this loaded maiden event at Big Sandy on Belmont S. eve. Hall of Famer Bill Mott unveils the latest Godolphin blue-blood in Cody's Wish (Tapit). The homebred is a daughter of Grade I winner Dance Card (Tapit), who is also the dam of GSP Endorsed (Medaglia d'Oro) and SP Bocephus (Medaglia d'Oro). Todd Beatie ships in from Penn National with a $600,000 KEESEP purchase making his debut in The Honorable One (Honor Code). Out of SW It Tiz (Tiznow), the dark bay is a half-sister to Grade I winner It Tiz Well (Arch). Todd Pletcher sends out an expensive colt making his second start in Shadwell Stable's Mahaamel (Into Mischief). The $700,000 KEESEP buy checked in a close second to First Captain (Curlin) in his debut over track and trip Apr. 24. That foe came back to earn 'TDN Rising Star' honors with an impressive allowance win in Elmont May 29.The son of GSW Hot Stones (Bustin Stones) adds blinkers for this second attempt. TJCIS PPs