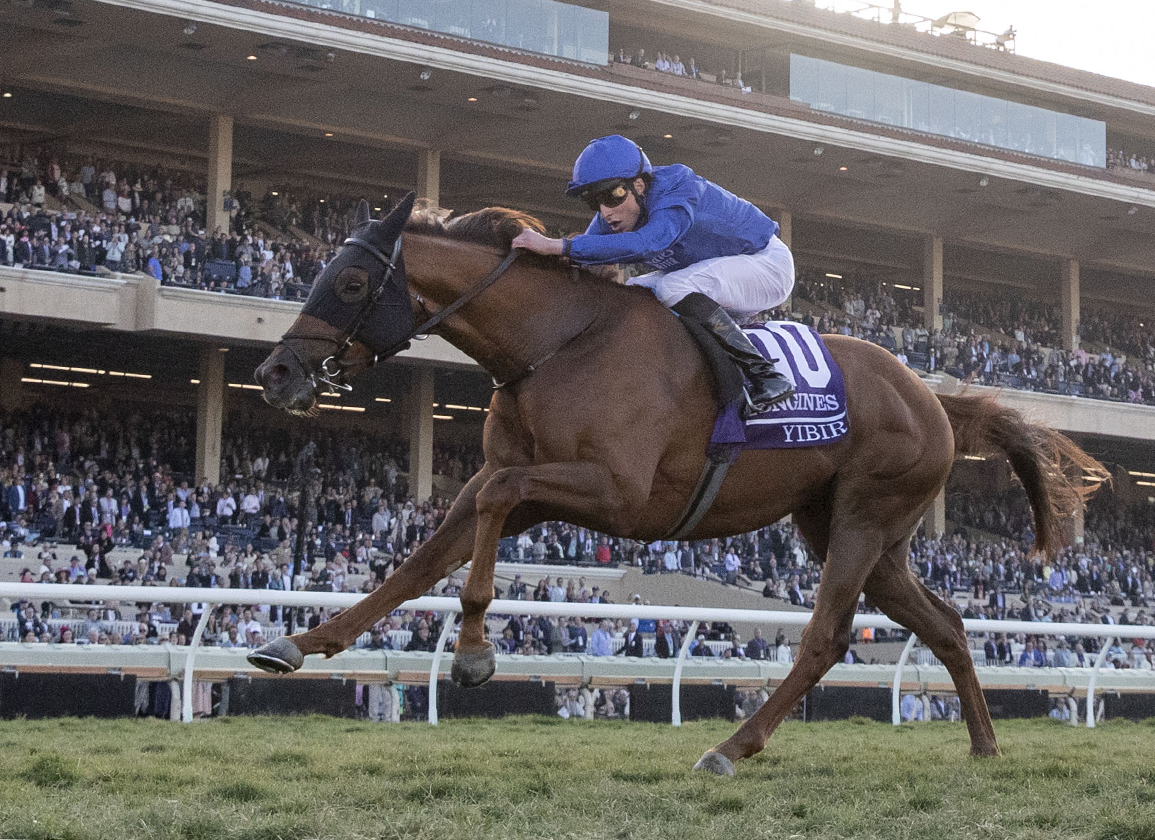 With the skies free of cloud, Newmarket begins its three-day July Festival on Thursday which for many afficionados of the turf is their highlight of the year. The feature on day one is the G2 Princess Of Wales's Close Brothers S., which sees Godolphin's international bigwig Yibir (GB) (Dubawi {Ire}) face off against Shadwell's still-improving Mostahdaf (GB) (Frankel {GB}). Yibir may have slipped a little of late, with a surprise second to Living Legend (Ire) (Camelot {GB}) in the Rowley Mile's G2 Jockey Club S. presaging another disappointing reversal when third in the May 14 GI Man o'War, but the reigning GI Breeders' Cup Turf title holder has enjoyed a freshener and returns to the scene of his G3 Bahrain Trophy win at last year's Festival.

“He had a break after coming back from New York in May, he looks great and he's in good order for this,” Charlie Appleby said of Yibir. “He will be aimed at the [GI] Sword Dancer back in the States early next month.”

Mostahdaf's second in the G2 Hardwicke S. at Royal Ascot June 18 was his first try at this mile and a half and it may be that Jim Crowley can be more positive now that his stamina is proven as tactics promise to play a big part. “He's quite a tough horse,” Angus Gold said of the Shadwell representative. “As a 3-year-old he was quite immature, but now he's more mature he should be able to cope with the quick turnaround with any luck.”

“His sire Mehmas was second in the Coventry before going on to win the July Stakes, so I'm hoping he can do the same,” Persian Force's trainer Richard Hannon said. “He's got the right profile going into the race and he is still the horse we hope he is.”

In the 13-furlong G3 Bahrain Trophy which acts as an early St Leger pointer, Mick and Janice Mariscotti's Derby fourth Masekela (Ire) (El Kabeir) bids to put down his marker for the Doncaster Classic as he returns to the scene of his short-head defeat by Native Trail (GB) (Oasis Dream {GB}) in the G2 Superlative S. at last year's July Festival. Whereas he chose Epsom to burst back onto the scene, Aquis Farm and Manton Park's Zechariah (Ire) (Nathaniel {Ire}) had Royal Ascot as the backdrop to his revival as he went down by an agonising margin to the leader Leger fancy Eldar Eldarov (GB) (Dubawi {Ire}) in the June 15 G2 Queen's Vase. As a juvenile, the Freddie and Martyn Meade-trained Zechariah had a 2 1/4-length margin to spare over Westover (GB) (Frankel {GB}) in Newbury's Haynes, Hanson & Clark Conditions S. Form which looks very healthy as of this moment in time. Baaeed (GB) (Sea The Stars {Ire}) began his heady ascent in this card's Listed Edmondson Hall Solicitors Sir Henry Cecil S. and a year on, the race which pays tribute to the Town's much-missed great sees the Gosdens-Dettori link re-established with Saeed Suhail's G1 St James's Palace S. fifth Mighty Ulysses (GB) (Ulysses {Ire}).

“Inspiral hasn't done much since then [the Coronation], but all has been well with her and she enjoyed a nice stretch on Saturday with Robert Havlin on board,” said Cheveley Park Stud Managing Director Chris Richardson. “Frankie knows her well, having ridden her in all her races bar her first, and Mrs. Thompson is pleased that John [Gosden, joint trainer] is happy for him to ride her again on Friday.”

Primo Bacio (Ire) (Awtaad {Ire}) is next in the ratings, and will attempt to build on her G2 Duke Of Cambridge S. third, while G1 1000 Guineas second Prosperous Voyage (Ire) (Zoffany {Ire}) and group winner Sandrine (GB) (Bobby's Kitten) attempt to return to form after unplaced efforts behind Inspiral in the Coronation. 'TDN Rising Star' Sibila Spain (Ire) (Frankel {GB}) enters on the back of a gritty victory in the G2 Prix du Muguet in May.