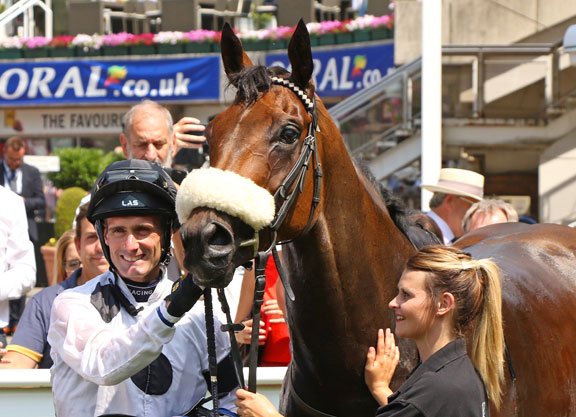 It is a quarter of a century since the Camacho family first guided the Elite Racing Club into the world of breeding racehorses. Former trainer Maurice took charge of the small handful of reasonably-purchased fillies and mares from which a Group 1 dynasty has sprung at Star Cottage in Malton.

Now, with Camacho's daughter Julie and her husband Steve Brown at the helm of this dual breeding and training operation, it seems appropriate that their first-ever chance of a top-class winner could be reaped from the seeds of an inspired investment by an ownership group which provides an interest for thousands of members nationwide.

Although Judicial (Ire) (Iffraaj {GB}) was not raised at Star Cottage, he is a direct product and were he to follow on 12 months after the victory of his half-sister Marsha (Ire) (Acclamation {GB}) in the G1 Coolmore Nunthorpe S. at York, the story would seem to have been taken full circle.

“My father-in-law has always had mares for Elite and the main mare we had here was Kalinka (Ire) (Soviet Star),” Brown explained. “She passed away a few years ago but bred [multiple Group 1 winner] Soviet Song (Ire) (Marju {Ire} and a lot of the family tree goes back to her. She bred mares like Baralinka (Ire)(Barathea {Ire}), who bred Marlinka (Ire) (Marju {Ire}), who bred Marsha and Judicial.”

“It's a good lineage but it all started from a couple of mares and the success that Elite have had in terms of breeding good horses has never really been looked at in detail, in my opinion. What they achieved with a relatively small amount of mares is amazing. The likes of [G1 Prix Jean Romanet winner] Ribbons (GB) (Manduro {Ger}) and Tribute Act (GB) (Exceed And Excel {Aus} have come along too, all from a few mares. If you think what the big operations are trying to do with hundreds of mares, it's a fantastic story.”

Maurice handed the key to the yard to his daughter and son-in-law back in 1998, having taken over a licence himself from his stepfather WA 'Charlie' Hall, a renowned jumps trainer. Recently, he also endowed the broodmare side of the business to the couple.

“Dad did say he was going to retire but he's still very much involved,” Julie said.

“I enjoy it, it takes your mind off being totally focused on the racing,” added Brown. “We have good staff and make decisions between us. Elite have two mares here at the moment – Affinity (GB) (Sadler's Wells) and Kind Of Hush (Ire) (Marju {Ire}). Affinity is a daughter of Kalinka, so the line continues. We have some mares for other clients, some of whom are friends of my brother-in-law Matt Camacho. Martin Hughes and Michael Kerr-Dineen have a couple and Johnny Allison has a share in one with us.”

Duties are shared between the two of them but Julie tends to monitor the gallops with Brown, a former assistant to Luca Cumani and usually the spokesperson, remaining in the nerve centre.

“I'm more in the background, but I don't mind it that way,” Julie explained. “There's a lot more labour involved than there used to be, so we both muck in.”

There have been plenty of lean times over the years, with annual tallies often dwindling to low single-figures. Recently though, in a North Yorkshire scene which seems to grow increasingly competitive, Judicial has been spearheading quite a revival. Along with Elite, owner-breeders such as David Armstrong and Geoff and Sandra Turnbull have joined a stable which tends to number fewer than 30 and is concentrated upon the Flat.

“We're having our best-ever year, our previous best was 17 last year but we've surpassed that and are already onto 19 winners and nearly £200,000, aided and abetted by Judicial's success,” Brown said. “Three years ago we changed our routine totally, and it's been a steady progression from there. We feel as though it's been helpful. We keep everything very simple and don't have masses of horses. Of course, we get things wrong, but we hope to get more right than wrong.”

Julie added: “Dad bought Star Cottage 37 years ago after we moved from Towton, and he used to have a few jumpers along with majority Flat. He won the Mackeson Gold Cup in his first season with Clear Cut and had some good ones like Avro Anson. We do have a dual licence but none of our owners are really interested in the jumps, and I get very nervous watching them anyway.”

The use of heart-rate monitors has been a useful innovation but there has been one particularly interesting amendment made to their regime.

“We use the public gallops in Malton and to ride them up there, which we used to do, would take an hour and a half round. So now we warm them up at home, box them up to the gallops, they do their exercise, come home and are turned out,” Brown revealed. “It's an odd one really, but they seem much fresher and happier doing that. An hour and a half is quite a long period to ride a horse each day, especially in modern times. Those days of two or three lots a morning are gone, and you've got to adapt to keep up.”

Judicial was originally with Roger Charlton and has made his way up in incremental levels though handicaps and conditions races. Now six, he was collared by fellow northern star Mabs Cross (GB) (Dutch Art {GB}) in the G3 Palace House S. in the spring and finally struck at the same level when fending off fellow veterans Muthmir (Ire) (Invincible Spirit {Ire}) and Mirza (GB) (Oasis Dream {GB}) in the Coral Charge at Sandown.

“There were one or two incidents of poor behaviour down at Beckhampton and Roger, in fairness to him bearing in mind this was a horse who won his first three races as a 2-year-old, suggested he might be happier in a small yard with some turnout,” Brown explained. “When he moved up, Roger was forensic in the detail of what we might and might not do, and most of it has proven to be accurate. Fortunately it worked out well but it's his third season with us to get to this stage.”

“We had a slight issue with him before he was going to go and run in Ireland, his blood picture wasn't 100%, so we sidestepped that. He came back to full health very quickly and has been training well since.”

“All the main protagonists are having a run here and there and we thought we'd go there nice and fresh. Racing in the weather we've had, such a dry, sustained period, can take a little bit more out of horses than normal. We wanted to go to York in peak condition.”

Judicial is not the only one of the family in training from a network which has gained ever more credence since the sale of Marsha for a European public auction record 6-million gns to Coolmore's MV Magnier at Tattersalls last December. Their 4-year-old half-sister Marseille (Ire) (Excelebration {Ire}) has been one of the few disappointments this term for the yard but there could be higher expectations from Judicial's juvenile full-sister Loretta (Ire). Brown reports that Marlinka currently resides at Furnace Mill Stud and is in foal to Frankel (GB).

“Marseille won and was placed last year but just hasn't gone on this year,” he said ruefully. “That's horses I'm afraid, and I do hope we can get her back. She's never going to be the level of Judicial, I feel, but she's a winning half-sister to a Group 1 winner so there's a residual value and I think the likelihood is that Elite will breed from her.”

“The 2-year-old's a nice filly. We got her to about three-parts speed and she shows promise but she's a little immature so we've eased back on her now. She may run towards the end of the year. There are some similar traits but she's quite a different model.”

It will be a different proposition for Judicial against the likes of Battaash (Ire) (Dark Angel {Ire}) and Blue Point (Ire) (Shamardal), but his worth to Star Cottage–even if he is a gelding–is assured.

“My dad had a lot of good horses but he never had a group winner,” Julie concluded. “Judicial was our first-ever group winner and will be our first Group 1 runner. We know it will be tough but he deserves his chance.”