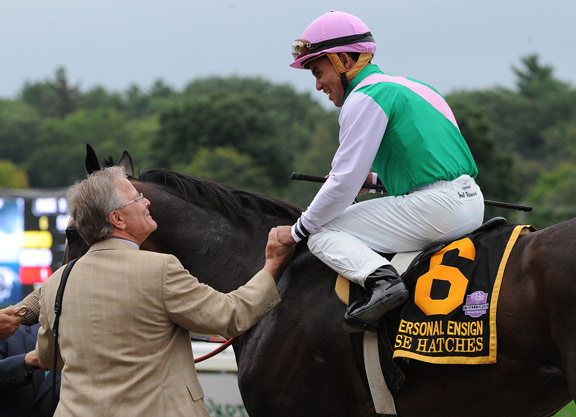 Eclipse champion Close Hatches (First Defence), dam of multiple graded stakes winner Tacitus (Tapit), will be visiting WinStar Farm stallion Constitution this year, highlighting a list of high-profile U.S.-based mares whose 2021 mating plans were released Monday by Juddmonte Farm. The 11-year-old mare, who has a yearling filly by Constitution's sire Tapit and was bred to that Gainesway stallion last year, is one of several Juddmonte mares expected to be bred to Constitution this year. The list also includes 2012 Canadian 2-year-old filly champion and GI Darley Alcibiades S. winner Spring in the Air (Spring at Last).

“We are breeding quite a few mares to Constitution,” Juddmonte's Leif Aaron said. “His early results speak for themselves and he is able to get a Classic-type of horse which is what we are after. He is capable of siring graded-stakes caliber horses at a very impressive frequency. He seems to fit nicely with many of our mares for a variety of reasons.”

Juddmonte Farm has eight mares booked to Into Mischief in 2021.

“He is such a strong influence of speed and determination and he matches well with our Classic mares,” Aaron said of the Spendthrift stallion.

Among the Juddmonte mares visiting Into Mischief this year are four-time Grade I winner Emollient (Empire Maker)–who was repatraited to the U.S. after producing foals by the farm's English superstar Frankel (GB) the last three years–and Hachita (Gone West), dam of Grade I winner Announce (GB) (Selkirk).

Of what he expects from progeny of Into Mischief, Aaron said, “Without sounding like a broken record, it really is their speed, soundness and determination that makes his offspring so successful. He really stamps his offspring. When an Into Mischief walks out of the barn, you usually have a pretty good idea of who the sire is.”

Juddmonte has been represented by a trio of homebred 'TDN Rising Stars' from the barn of trainer Brad Cox in the last few months, two of whom–Mandaloun and Prate–are by Into Mischief.

“Those two colts reinforce that Into Mischief is a sire that is consistently getting winners,” Aaron said.

Mandaloun, tabbed a 'TDN Rising Star' following a debut win at Keeneland in October, was third as the beaten favorite in the Jan. 16 GIII Lecomte S. in his sophomore debut.

“We are taking our time with Prate and trying to find the right spot for him,” Aaron said. “Both colts are doing great.”

“Both of those short yearlings that were entered are fillies and their relatives made it an easy decision for us to hold on to them for now,” Aaron said. “At the moment we are going to let them grow up a little and reevaluate from there.”

Juddmonte's trio of 'Rising Stars' is completed by the filly Sun Path (Munnings) and her sire will also be covering Juddmonte mares in 2021.

“Munnings is a horse that has done it the hard way and continued to grind his way to the top,” Aaron said. “With Sun Path, we were a little disappointed in her last race, [fourth in the Jan. 16 Silverbulletday S.], but everyone has a bad day now and then. We will wait for Brad's advice on how she is doing and where to go with her next.”

Among the other Juddmonte matings announced Monday, Soothing Touch (Touch Gold), dam of Emollient, will visit Curlin and Grade I winner Antonoe (First Defence) will visit Speightstown. Multiple Grade I winner Paulassilverlining (Ghostzapper) and Rising Tornado (Storm Cat), dam of Close Hatches, will both be bred to Tapit.