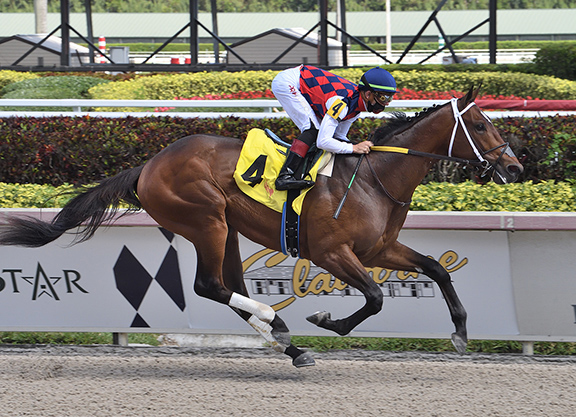 A Triple Crown winner in his native Barbados, Saffie Joseph Jr. took his first shot at America's Classics in 2020 with GISP Ny Traffic (Cross Traffic), who failed to hit the board in both the GI Kentucky Derby and GI Preakness S. last fall before heading to the sidelines for the remainder of the season. Fast forward to 2021, Joseph returns to the Triple Crown trail with another exciting prospect in Three Chimneys Farm and eFive Racing's Collaborate (Into Mischief), who is slated to contest Saturday's GI Curlin Florida Derby at Gulfstream Park. The colt debuted with a fifth as the favorite going six panels in the Gulfstream slop Feb. 6 before rebounding to a TDN Rising Star garnering performance when winning by an eye-catching 12 1/2-length margin  stretching to a mile at the Hallandale oval Feb. 27.

“Every time we worked him before he ran, he impressed really me,” he said. “He did everything so effortlessly and nothing seemed to phase him. So, when he got beat first time out it was a big disappointment because he had touted himself so much leading up to that. I just didn't think he'd get beat. But that day, he got valuable experience. It was a relief second time out because we always knew he had that kind of talent.”

Joseph's first Grade I victory was recorded by Math Wizard (Algorithms), a one-time $25,000 claimer who went on to annex the 2019 Pennsylvania Derby. And it was the development of lesser pedigreed horses into top-rung winners that earned Joseph Jr. the street-cred needed to usher in flashier stock. Case in point, purchased for the healthy sum of $600,000 at the Fasig-Tipton Saratoga Select Yearling sale, Collaborate represents the highest priced sales purchase for the young trainer.

“He's definitely the most talented horse I've ever had,” affirmed Joseph Jr. “He has a lot of ability. We're a little behind schedule, so we're asking him to do things that might be a tall task. But he seems like he as the ability to overcome it. Getting beat the first time, in hind sight, was a blessing because he got a lot of education from that. He got more tired first time out than in his second start. We just hope we can build on that and show up again and run a similar race [in the Florida derby]. If he does, we think we have a horse that is very capable.”

Regarding tactics for the nine-furlong contest, he added, “He's very versatile. I think that's one of his advantages. He has that high-cruising speed and he stays pretty strong late. I think he will be on or near the lead, where he is comfortable. Ideally, he will be in a forward position and can run his race.”

Joseph will also be represented by additional Triple Crown hopefuls–Moonlite Strike (Liam's Map) and Awesome Gerry (Liam's Map)–at Turfway Park Saturday in the GIII Jeff Ruby Steaks, which offers 100 Derby points to the winner. The former won second out going seven-eighths at GP West before adding another tally while adding a furlong in a Dec. 10 optional claimer. Fourth in Oaklawn's Smarty Jones S. Jan. 22, he was an improved third last time in the Mar. 6 GII Lambholm South Tampa Bay Derby.

“In the Tampa Derby, he kind of jumped up and ran above his odds and actually surprised us,” admitted Joseph Jr. “He was third and picked up 10 points and he had one more from his previous race at Oaklawn. [Sonata Stables] wants to give him a chance to continue on and see if he can pick up some more points.”

John Fanelli, Cash Is King, LC Racing, Paul Braverman and Timot Pinch's Awesome Gerry won two of four starts in Southern Florida at two in addition to finishing runner up in the Jean Lafitte S. at Delta last November. Third in Gulfstream's Mucho Macho Man S. in January, the grey finished seventh and sixth, respectively, in the Jan. 30 GIII Holy Bull S. and most recently in the Tampa Bay Derby.

“We feel like if Moonlite Strike finishes one-two-three he can earn a spot and it would be nice for the owner to have a Derby runner,” he said. “We thought the Jeff Ruby was the best opportunity to pick up some points. He has a turf pedigree, so we figured he might light the Tapeta and that might help move him up a little bit. And we hope the Tapeta could also help Awesome Gerry move up, too.”

While having already earned Derby points when winning the Jan. 30 GIII Swale S., Slam Dunk Racing, Madaket Stables, Wonder Stables and Michael Nentwig's Drain the Clock is unlikely to pursue a berth the First Saturday in May. He most recently finished runner up behind Florida Derby early favorite Greatest Honour (Tapit) in the Feb. 27 GII Fasig-Tipton GII Fountain of Youth S.

“Drain the Clock picked up 20 points in the Fountain of Youth S. and it was probably easy to pick up a few more points to get him to the Derby, but that ownership group they don't want to go to the Derby if they can't win it,” he confirmed.

Instead, the chestnut will be redirected to shorter distances, beginning with the Apr. 3 GIII Bay Shore S. at Aqueduct. Irad Ortiz Jr. will have the mount.

Although Joseph had spent many of his early years as a trainer dreaming about having a horse good enough to make it into the starting gate on Derby day, his initial attempt during a COVID- plagued season proved anything but usual. So, heading toward this year's race, what was his chief takeaway after tackling the 2020 renewal?

“Last year was the first time, so you obviously learn something,” he said. “Even without a crowd, in the walk over our horse got a bit keyed up. If we get back there this year, we'd probably use earplugs on the horse. But as far as training, you just hope the horses stays healthy enough to get into the race.”