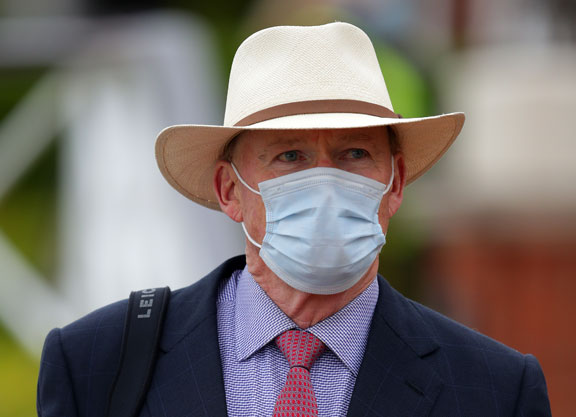 John Gosden was on Monday named champion flat trainer for the third year running and fifth time overall. Gosden's runners earned £3,114,226 on the racecourse in 2020, more than £650,000 ahead of Aidan O'Brien. Gosden's stable took home seven Group 1 trophies this year, including a third win in the G1 King George VI and Queen Elizabeth S. for Enable (GB) (Nathaniel {Ire}) and for Stradivarius (Ire) (Sea The Stars {Ire}) in the G1 Gold Cup at Royal Ascot.

“I would like to thank all of my staff for all of their endeavours in this most difficult of years,” Gosden told Great British Racing. “My thanks to our owners, who have been so supportive, and to the whole racing industry for pulling together so effectively.”

Sheikh Hamdan's racing manager Angus Gold said, “To win the champion owner title is a fantastic achievement for everyone involved, it's what we all work hard for and strive to achieve. It's been a difficult year for everyone, but we have been blessed on the track this year with some amazing horses. While it was sad for Sheikh Hamdan not being able to come over to the likes of Royal Ascot to see them in the flesh, he is incredibly enthusiastic, and winning the champion owner title means the world to him and all the team.”

Ben Curtis took the 2020 annual flat jockeys' title with 170 wins. Curtis won a pair of Group 3s in June before a career high with Dandalla (Ire) (Dandy Man {Ire}) in the G3 Albany S. at Royal Ascot, on whom he also won the G2 Duchess of Cambridge S. the following month.

“Given the lockdown in March, I set out to pass the 100 winners mark, so to have surpassed that along with the many other talented jockeys in the weighing room at the moment, such as Hollie [Doyle] and Tom [Marquand], is a great achievement,” he said. “For us to have reached those figures, all things considered, is fantastic for British racing.”