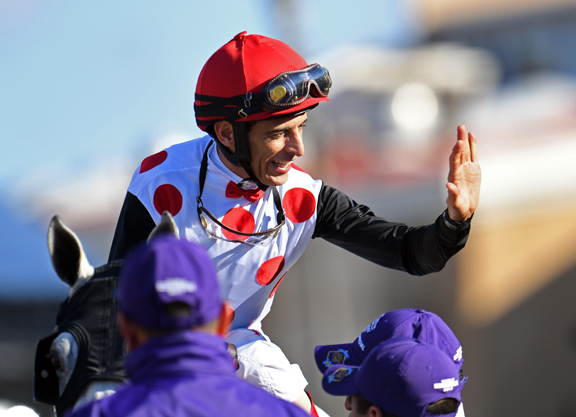 The Jockeys’ Guild released a statement Wednesday responding to recent pushes from within the industry to regulate and in some cases eliminate whip usage. The most recent call for reform came from Terry Finley on TDN‘s Thoroughbred People with Patty Wolfe podcast. The Guild’s statement reads:

“As the organization representing jockeys throughout the United States, the safety of both our equine and human athletes are paramount and of the utmost importance. Furthermore, it must be recognized that the Jockeys’ Guild and our members are adamantly opposed to any animal abuse and any person who does so should be fully punished for such occurrences. However, it is the opinion of the Jockeys’ Guild, which is made up of highly regarded and respected jockeys, that the current riding crops are humane. While the Guild and its members are supportive of any changes that improve the well-being of the horse, we do believe that it is important to recognize that use of the riding crop is still necessary, not only for safety, but also for communication, control of the horse, and assurance of maximum placing. This cannot be emphasized enough.

“The proposals by the California Horse Racing Board, The New Jersey Racing Commission, and The Jockey Club, to eliminate the use of the riding crop but for safety purposes, will have serious consequences and could result in even greater risks and dangers. It is the opinion of the jockeys, those whose lives are at risk, that there could be catastrophic consequences for both the horses and the jockeys if the riding crop is eliminated but for safety purposes.

“Since the initial discussion before the CHRB in March of this year, the Guild has strongly been opposed to the elimination of the use of the riding crop but for safety purposes. We are also on record stating that it is our belief that, we as the industry, including the owners, horsemen, racetracks, and the regulators, can reach mutually agreed upon regulation with regards to the use of the riding crop, that will be safe and humane to the horse, while still allowing the riders to use it in a controlled manner but still in the best interest of racing. However, the Guild and the jockeys were not afforded the opportunity to be included in the discussions before the proposals were published and the concerns that we have expressed were not addressed, including those as outlined in the letter to the CHRB dated November 19, 2019 which is attached.

“Recognizing that the industry is at a crossroads and the need for reforms, the Guild’s Board of Directors, after much discussion, has made a proposal of significant changes to the current ARCI model rule. While much of the ARCI rule was similar to the British Horseracing Authority and other international standards, there were three areas where we will be proposing amendments. Most significantly would be with regards to the limiting of the number of times the riding crop is to be used in the forehand (“up”) position and being able to lift the crop only to the helmet level.

“An additional proposal was submitted to the CHRB, which incorporates the existing ARCI Model rule, along with the Guild’s proposed changes. This proposal also includes that after a race, horses will be subject to inspection by a racing or official veterinarian looking for any signs of distress from the riding crop, including cuts, welts, or bruises in the skin. Any adverse finding shall be reported to the stewards. This clause has been a part of the ARCI Model Rule for many years.

“The Guild is working with the Thoroughbred Safety Coalition to reach an agreed upon proposal. It would be our hope that establishing such rule, similar to many of the international standards, would lead to a universal riding crop usage [standard]. The ultimate goal is to establish a standard that is in the best interest of the welfare of the horse, as well as the industry as a whole, including the betting public. Such uniformity would be the best interest of the horses, enhance the perception of our industry, and still provide for fairness to owners, the betting public, horsemen and the jockeys.”