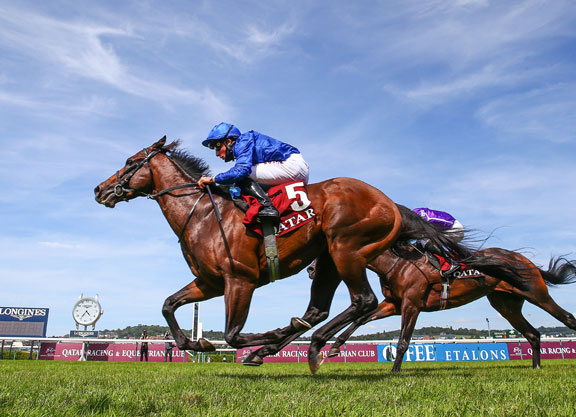 Dropping back to the seven-furlong trip over which he proved so dominant in 2019, Godolphin's Pinatubo (Ire) (Shamardal) was duly back to winning ways in Sunday's G1 Qatar Prix Jean Prat at Deauville. Vanquished at a mile when third in the G1 2000 Guineas and runner-up in the G1 St James's Palace S., the 3-5 favourite was buried in the pack early by William Buick and was at his previous best as he threaded through rivals to take command a furlong out. Threatened by one of last year's foes Lope Y Fernandez (Ire) (Lope de Vega {Ire}) in the run to the line, the homebred pulled out extra to score by 3/4 of a length as Ballydoyle's 40-1 shot pulled 2 1/2 lengths clear of another outsider in Malotru (GB) (Casamento {Ire}) in third.

“I never lost faith in Pinatubo and Sheikh Mohammed gave us a lot of confidence this week, saying if we were happy then to go again, it's no problem,” Charlie Appleby said. “He delivered this time. When you have been champion 2-year-old, to get beaten in the Guineas is hard to take and then he had the stiff mile at Ascot, but I wouldn't take anything away from the horses that beat us on both occasions, they are good horses. We are proud of him and will probably give him a little rest now and talk to Sheikh Mohammed. He was a little far back early, but was travelling as nicely as you'd hope in such a top race and he has that turn of foot and kick. When he found the gap, he went through it very nicely.”

Very few juveniles are capable of turning it on as Pinatubo had in the G1 Goffs Vincent O'Brien National S. at The Curragh in September and after he had confirmed his status as generation kingpin in the G1 Dewhurst S. the following month at Newmarket the world was his oyster. Whether the month's delay to the 2000 Guineas cost such a set and mature colt will never be known, but when the die was re-cast at Royal Ascot a fortnight later he had reversed the form of that June 6 Classic with the runner-up Wichita (Ire) (No Nay Never) only to find Palace Pier (GB) (Kingman {GB}) too strong at the finish.

Just as Too Darn Hot (GB) (Dubawi {Ire}) had done last year, Pinatubo almost had to win here and he had every excuse for failing to come through. Bumped and hassled by Kenway (Fr) (Galiway {GB}) in the early stages as Buick sought to get some daylight, he was helped by the strong tempo set by his stablemate Well of Wisdom (GB) (Oasis Dream {GB}) who has class in his own right and looks the perfect pacemaker from here on. Working between rivals to subdue Wooded (Ire) (Wootton Bassett {GB}) approaching the last furlong, he had only Lope Y Fernandez to concern him from there with last week's G1 Prix du Jockey Club-winning jockey Ioritz Mendizabal getting a real tune out of the colt who had been behind Pinatubo when second in the Listed Chesham S. and third in the G2 Vintage S. last term.

Appleby is still learning about his stable star and said, “This is what we saw from Pinatubo as a two-year-old. He travels and then has that electric turn of foot. William said that he was sat last at halfway with not a lot of room but, before he knew it, he was up there on the bridle again. We have always felt that Pinatubo is a very courageous horse. Going back to a mile is something that we need to talk about. He does travel extremely well and has that acceleration. He is going to be one of those milers that you are going to have to ride with so much confidence and just hope that you get there.”

Lope Y Fernandez's rider said, “We had a very good trip and he's a nice horse who was just beaten by a superior one on the day, so I have no excuses really. I just feel that on softer ground, he'd be better.” Wooded's trainer Francis-Henri Graffard said of the eventual fourth, “At the two pole, he was travelling so nicely I was hoping but it is obvious to me now that he doesn't stay seven. He has run a great race.”

Pinatubo's dam Lava Flow (Ire) (Dalakhani {Ire}), a half-sister to the G1 Gran Criterium runner-up Strobilus (GB) (Mark of Esteem {Ire}), was able to win the 11-furlong Listed Prix de la Seine so it is probable that like Too Darn Hot he is not conforming to his pedigree. The second dam Mount Elbrus (GB) (Barathea {Ire}) also scored at listed level at 10 1/2 furlongs and is out of a half-sister to the G1 Prix de Diane heroine and outstanding producer Rafha (GB) (Kris {GB}).
That connects Pinatubo with the all-powerful sire Invincible Spirit (Ire) and his brother Kodiac (GB), so it could be that he draws from the family's fount of speed as other members Gustav Klimt (Ire) (Galileo {Ire}) and James Garfield (Ire) (Exceed and Excel {Aus}) did before him. This remarkable dynasty also features last Sunday's G1 Prix du Jockey Club hero Mishriff (Ire) (Make Believe {GB}), the G1 Pretty Polly S. heroine Chinese White (Ire) by Lava Flow's sire Dalakhani, and the G1 Inglis Sires and G1 Blue Diamond S. hero Pride of Dubai (Aus) (Street Cry {Ire}). Lava Flow's 2-year-old filly is by Sea the Stars (Ire), while she also has a yearling filly by Teofilo (Ire).