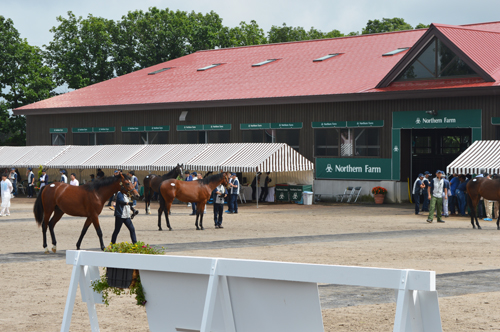 Inspections at the Northern Farm consignment

HOKKAIDO, Japan–with just a day remaining before the start of the JRHA's Select Sale of yearlings and weanlings in Hokkaido, Japan, buyers from across the globe filled the Northern Horse Park on Sunday to inspect the 247 yearlings set to be offered Monday. A torrential downpour midday wasn't enough to dampen the spirits of those gathered, who later reconvened at the Horse Park for the sale's colourful welcoming party.

Teruya Yoshida, the owner of Shadai Farm and vice chairman of the JRHA, opened the party by jovially encouraging visiting buyers to spend their money, saying, “We've been collecting some big money from all of you, but we've been investing it in buying very good mares all over the world, so don't hesitate [when bidding].”

The money that has been spent by Yoshida, as well as his brother, Katsumi Yoshida of Northern Farm, and other Japanese breeders on mares worldwide is apparent immediately upon flipping through the catalogue, and thus it is no surprise that international visitors are showing up year-on-year to try to take home a piece of the pie.

While the American visiting party is smaller than last year, JRHA officials are pleased by a first visit to their sale by Coolmore's MV Magnier, who arrived on Sunday and was out inspecting horses with that operation's Dermot Ryan and David O'Loughlin as well as American-based agent John McCormack, a regular at this sale.

There were also a notable number of Aussie accents to be heard on the grounds. Included in that contingent were Francis and Christine Cook with trainer Matthew Smith and his wife Melissa; Adrian Bott, racing manager to Gai Waterhouse, who made her first purchases at this sale last year but will not be in attendance herself this year; Hong Kong-based agent Justin Bahen; and Peter and Toby Liston of the Victorian-based Three Bridges Thoroughbreds.

Toby Liston, who is making his first visit to the sale, said this year's mission is to learn, with hopes of buying next year.

“It's been a goal of ours for a long time to come to Japan; they're leaders in the world now,” he said. “For us it's exciting to be here and learn and just scope it out. Our biggest client wants to get a license in Japan so we're going to see the process behind it. We'd like to win races in Japan and bring the horses to Australia to run in our big staying races in the future. Every time they come to Australia, they kick our butts, as the Americans would say, so we want to join the force, learn, and hope to compete with them.”

The JRHA yearling session begins at 10 a.m. local time Monday, followed by the foal sale at the same time on Tuesday. Click here for the catalogue.

Also representing Australasia at the Northern Horse Park on Sunday were New Zealanders Bruce Sherwin and Tony Pike, who were doing their homework on behalf of New Zealand-based syndicate Raffles Racing, best known for campaigning four-time Group 1-winning miler Sacred Falls (NZ) (O'Reilly {NZ}). Sherwin is making his third visit to the sale and has bought on behalf of Raffles the last two years after it secured a coveted JRA racing license.

The seeds began to be sown for Raffles's foray into Japanese racing when it sold its prized filly Shamrocker (NZ) (O'Reilly {NZ}) to Northern Farm upon the conclusion of her racing career in 2011.

“When we sold her to Northern Farm, [Raffles principal] Dato Yap kept in touch with them and has formed a good relationship with them,” Sherwin explained.

Incidentally, Shamrocker has both her yearling and foal, both colts, consigned to this week's sale by Northern Farm. The foal (lot 437) is a Jan. 24-foaled bay from the second crop of Japanese Triple Crown winner Orfevre (Jpn), while the yearling (lot 19) is by Deep Impact (Jpn). Northern Farm has a ¥100,000,000 reserve on the yearling.

Sherwin said of the Deep Impact, “I really like him. He's thrown very much to the quality of the family, and I wish I had the budget to buy him. He's a star; we currently race [Shamrocker's half-sister] Rock Diva–she's a Group 1 winner–and there's a lot of similarities between him and her. In comparison to Shamrocker's first foal, I think this is a better specimen.”

Raffles has started the furnishing of its Japanese racing stable slowly, buying one filly each the last two years and importing a Sea The Stars (Ire) colt now named Sacred Sea (NZ). Both fillies have won, and Sacred Sea, produced Northern Hemisphere-time from a mare bought from Europe, finished sixth in his lone start. Hopes are high for the colt, however, with Sherwin explaining, “Most of our horses have the first name Sacred, if we like them.”

Longterm, Raffles's Japanese fillies could be exported to Australasia for their breeding careers.

“That was initially the plan with Dato getting the license,” Sherwin said. “We bought fillies the last two years with the idea of bringing that blood back to Australasia and even maybe covering them up here with the Japanese stallions Southern Hemisphere time.”

He added, “[Japanese horses] are achieving such great things on the world stage; they clearly can produce terrific racehorses, and that was one of the incentives with us coming here, to get into some of their bloodlines.”

Of the crops assembled this year, Sherwin observed, “I work with Raffles trainer Tony Pike from New Zealand so we tend to split the catalogue up, but the horses I've seen I've liked. It's as good a catalogue as I've seen the last three years, if not better.”

The name Robert Anderson may not be a highly recognized one in international racing circles, but if the Aussie's grand plans come to fruition, that will soon change.

The Melbourne-based boutique owner/breeder was inspecting yearlings at Northern Horse Park on Sunday with agent Satomi Oka just four days after being informed he would soon be granted a JRA racing license after 10 months of paperwork. Anderson bought his first Japanese-bred filly through Oka at this sale last year, and plans to slowly build a stable of fillies with the long-term goal of exporting them to Australia for their broodmare careers as valuable outcrosses to the Australian sire population. Anderson noted he is looking to reap the benefits of the work the Japanese breeders have done in recent years to build their pedigrees.

“The Japanese have been buying some of the best horses in the world for some years, and I'm looking for fillies,” he explained. “I bought a filly last year and I'm trying to buy one this year for breeding that is an outcross to our Australian standards. Hopefully I'll race the horses here, hopefully get them a bit of black-type and when they're finished racing breed them to a Japanese stallion Southern Hemisphere-time and take the mare back to Australia. That's my plan at this stage.”

Anderson keeps about 15 horses in training in Australia, mostly in Melbourne, and has about 28 mares at Widden Stud, some of which he owns in partnership with the Thompson family's operation.

“The majority of my mares are kept at Widden Stud in the Hunter Valley,” he said. “I've been there a long time. I have about 28 mares at Widden and a couple in New Zealand, but we've been buying mares from the U.S. and England for quite a few years now just to get a complete outcross to our stallions. I haven't actually raced in America; just recently Widden and I bought, as a joint venture, a mare in foal to More Than Ready and she just foaled recently. So we'll probably sell that colt at the sales in America.”

Anderson explained that he has also raced in France, but opted to focus on his Japanese interests partly due to convenience.

“I've raced horses in France, and I had horses I used to breed in France years ago but I found it a little far away from Australia to watch racing. To me, Japan is only an hour time difference, so it's a lot easier.”

Anderson said the best horse he has raced is his homebred Bonaria (Aus) (Redoute's Choice {Aus}), the winner of the 2014 G1 Myer Classic. He said he may think of sending some mares from his current broodmare band to Japan next year to be bred.

“I'm even considering sending a couple of my good mares from Australia that don't get in foal to our breeding season and sending them here and breeding them Southern Hemisphere time and taking them back to Australia, but I have to think that through a little more,” he said.

Of his first experience at the JRHA sale, he said, “I'm very impressed. The facilities are really good, the farms we've been to, they're very friendly and very helpful and very open. If a yearling has a problem, they'll always let you know.”

“Our currency is very weak into the yen at the moment so that's a bit of a downer, but still the prize money here is very good, so one offsets the other, if you get one that's good enough to win,” he added.

With a well thought out plan to buy into some of the world's best bloodlines, Anderson already seems to be onto a winner.