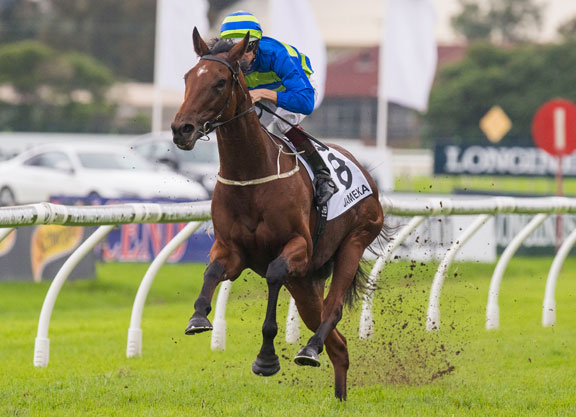 Jameka (Aus) (Myboycharlie {Ire}) had indicated throughout her autumn prep that she was building up to a big effort and–upped to the 2400 metre distance over which she won last season's G1 Caulfield Cup–the 4-year-old turned the tables on her last-start G1 Australian Cup conqueror Humidor (NZ) (Teofilo {Ire}) to take Saturday's G1 The BMW at Rosehill. Jameka broke strongly under Hugh Bowman and led the field into the first bend, where Lasqueti Spirit (Aus) (Beneteau {Aus}) strolled up and took over. Lasqueti Spirit threw down the gauntlet down the backstretch, opening up at least 12 lengths while Jameka led the rest of the pack, with Libran (Ire) (Lawman {Fr}) and Exospheric (GB) (Beat Hollow {GB}) on her heels. Lasqueti Spirit came under a ride at the 800 metre mark and by the time they reached the bend Jameka was cruising up to her ominously. Jameka rolled past Lasqueti Spirit at the 300 metre mark and never looked like being caught thereafter, widening her margin to win by 6 1/2 lengths from Humidor and Exospheric.

“There's the [G1] Queen Elizabeth during The Championships, there's Hong Kong, Royal Ascot, even the Yorkshire Oaks, there's a bit to look at,'' Maher said. “We need to have some conversations with the connections. We'll see how she comes through this, but she's such a quality mare.''