Jack is Back in Pat Day Mile 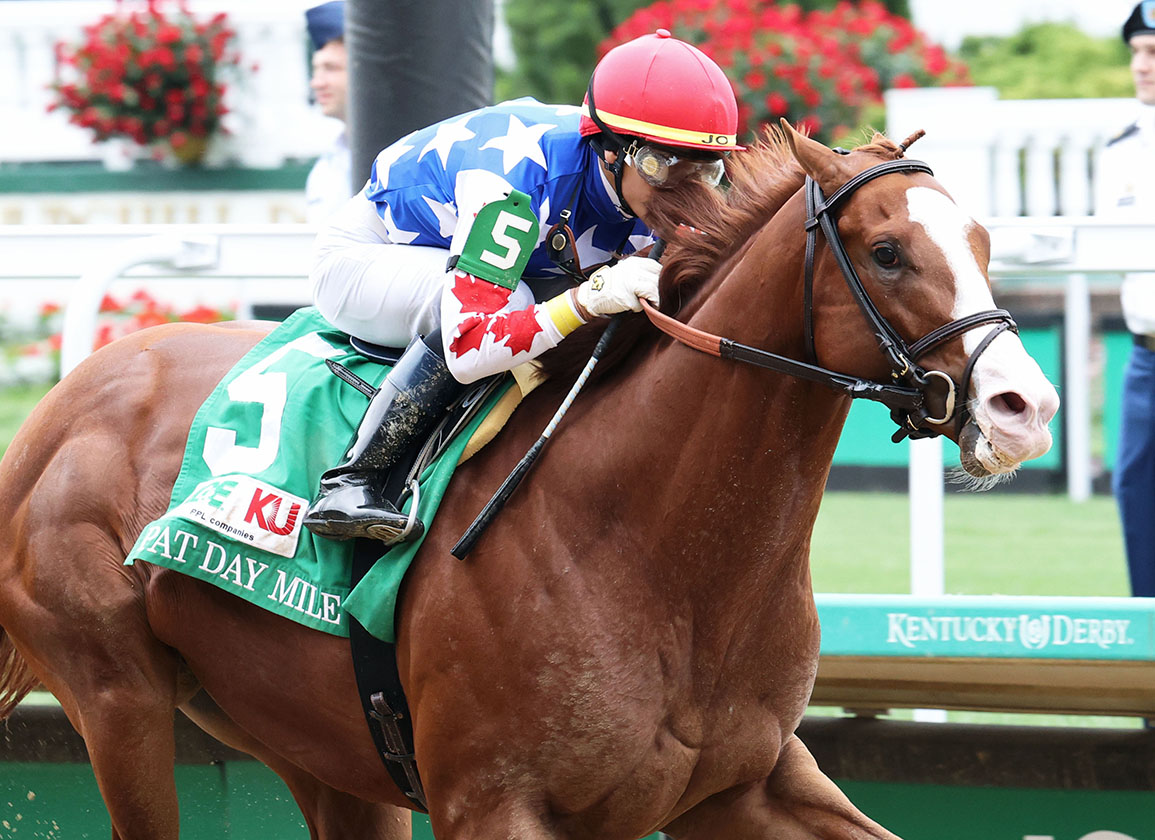 In the post-race interview, trainer Chad Brown compared Saturday's impressive GII Pat Day Mile winner Jack Christopher (Munnings) to Hall of Famer Ghostzapper (Awesome Again), who Brown worked with while under the tutelage of Bobby Frankel. Like Jack Christopher, Ghostzapper also missed the Triple Crown series and focused on races around one turn during his 3-year-old season before blossoming into a top handicap horse at four, including a win in the GI Breeders' Cup Classic.

“This horse reminds me a lot of Ghostzapper, I was fortunate to work with that horse, he moves about the same as him and that one had a few rough patches as well,” Brown said. “He has a lot more to do, how far we'll see. It's a wonderful victory, very gratifying, but it's bittersweet that we got him to the first Saturday in May [but not the Derby], which we had been thinking about since he debuted at Saratoga. To get him here on the first Saturday in May, and to get him to the winner's circle, it'll always be in the back of my mind what could have been. It is what it is.”

While those are some big shoes to fill, and whether a 10-furlong Classic is in Jack Christopher's future remains to be seen, but he's certainly off to a good start with three impressive victories from as many starts.

Well hyped heading into his six-panel debut at Saratoga Aug. 28, the flashy chestnut–who is the spitting image of his sire–more than lived up to the buzz with a dazzling 8 3/4-length score, earning 'TDN Rising Star' honors. He followed suit with a decisive score in Belmont's one-mile GI Champagne S. Oct. 2, earning a 102 Beyer Speed Figure. The early favorite for the GI Breeders' Cup Juvenile, the $135,000 FTKOCT buy was scratched by the vets the night before the race. A stress fracture was discovered in his left shin which required a screw and he did not return to Brown until February, making the GI Kentucky Derby basically impossible.

Hammered down to 3-5 favoritism for this return, Jack Christopher brushed with his inside neighbor a bit after the break, but was kept steady by Jose Ortiz and tugged his way up three wide between horses to establish position exiting the chute. He pressed from a joint second as GII Best Pal S. winner Pappacap (Gun Runner) clocked early fractions of :22.70 and :45.61. Sidling up besides the pacesetter on the backstretch run, the Brown pupil seized command at the top of the stretch with Pappcap still to his inside and GIII Swale S. victor My Prankster (Into Mischief) ranging up to challenge on the outside. Neither proved to be any match for Jack Christopher, who was kept to task by Ortiz when he began to drift slightly in the lane and gunned clear in the final sixteenth to win as he pleased. Pappacap held second over My Prankster.

“We asked a lot of him today after a long layoff and an injury,” Brown said. “Coming off of a layoff, you never know, especially running a mile. I had a really good feel, here on Derby Day, I asked a lot of him. I chose this race because I wanted him to run against his own age group, and I didn't want to sprint the horse. I wanted to run him in a race that allowed him to stretch his legs a little bit, get comfortable at some point of the race, protect him, and to move him forward. It certainly worked today.”

The Eclipse winner continued, “Jose did a great job, he got squeezed a little bit at the start, and made the good decision to use him early to move him up and out and in the clear. He really took control of the race at that point. At the end of the day, he's a super talented race horse and if we can keep him on the track, we'll see a lot of great things from him.”

“Cutting back to one mile brought my horse's 'A' game today,” Ortiz said. “I was worried around the three-eighths pole because I thought if there was one horse that could beat me it was Pappacap after he ran so well last time [fourth in the GI Curlin Florida Derby]. So I moved into him and when I got to him at the five-sixteenths, I felt like I had him. I heard Flavien [Prat on Pappacap] asking for more and he wasn't getting anywhere. So I was confident and waited longer so I had plenty horse for the end.”

Pedigree Notes:
Jack Christopher is one of five Grade I winners for Coolmore's Munnings and one of three of his offspring to secure that top-level score in 2021 along with Eda and Kimari. Breeder Castleton Lyons purchased the winner's dam Rushin No Blushin for $70,000 at the 2014 KEENOV sale in foal to Congrats. The half-sister to MGISW sire Street Boss (Street Cry {Ire}) did not have much luck at first. The resulting foal died and her next two foals did not do much running. She was barren in 2018 and then came Jack Christopher. The 13-year-old mare's only foal since is a juvenile filly by Mo Town. Rushing No Blushing failed to get back in foal to Munnings for 2022 and visited Complexity last spring. This is also the family of graded winners Bellera, Life Imitates Art and Beyond Blame.