Jack Christopher as Impressive as it Gets in Woody Stephens 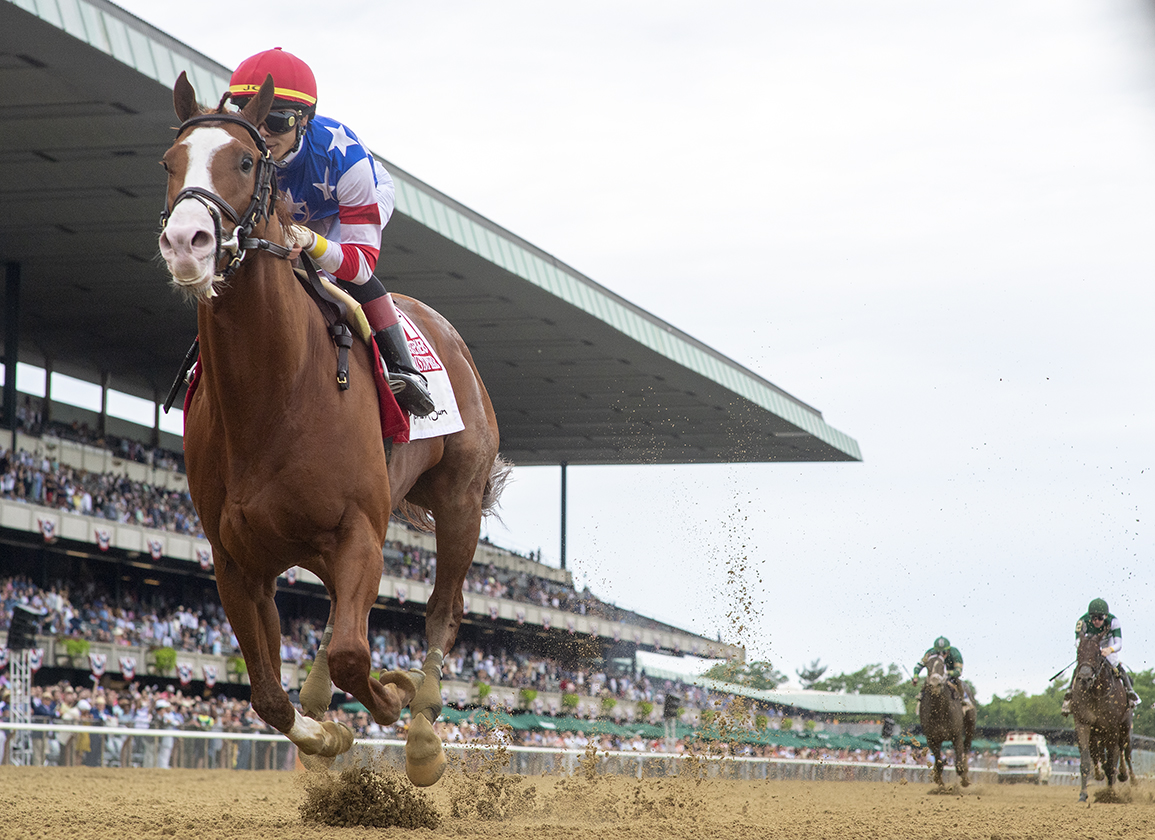 ELMONT, NY – Did the best 3-year-old in the country run on the undercard?

Away in good order from his rail draw, the flashy, blaze-faced chestnut conceded the early advantage to Provocateur (Into Mischief) and was astutely guided by Jose Ortiz to the outside of that rival. Traveling kindly in second through fractions of :22.61 and :45.38, Ortiz took a peek over his right shoulder and had to be feeling mighty good as the 1-5 favorite cruised up to take over leaving the quarter pole. It was only a question of how much he'd win by from there. And the answer was 10 lengths while stopping the timer for seven furlongs in a very sharp 1:21.18. Pappacap (Gun Runner) was second. The pacesetter held third.

“I felt really good as he was coming down the lane,” winning trainer Chad Brown said. “Once Jose [Ortiz] was able to extract himself and get this horse out in the clear, I didn't see any way the horse could lose.”

“This horse is an exceptional talent,” Brown said. “This is my 15th year of training and I've never had a dirt horse with this much pure brilliance. He reminds me a lot of Ghostzapper when I worked for Bobby Frankel. He's a brilliant horse that can probably run any distance.”

Brown added, “Everybody wants to have horses like this–horse of a lifetime–including me.”

A no-brainer 'Rising Star' on debut at the Spa Aug. 28, he concluded his juvenile season with a powerful performance in Belmont's GI Champagne S. Oct. 2. Scratched from the GI Breeders' Cup Juvenile with a stress fracture in his left shin, he returned with a facile win in the GII Pat Day Mile S. at Churchill Downs May 7.

“I'm looking to keep him healthy and looking forward to the next one,” Brown said.

Jack Christopher, a $135,000 FTKOCT yearling, is one of five Grade I winners for Coolmore's Munnings. He is the lone graded winner for broodmare sire Half Ours. The winner's dam is also represented by an unnamed Mo Town 2-year-old filly and a Complexity filly of this year. The former RNA'd for $145,000 at last week's Fasig-Tipton June Digital Sale. Rushin No Blushin, a maiden of eight career starts, was claimed for $50,000 out of her career finale by owner/trainer Neil Pessin at Keeneland in 2013. The half-sister to MGISW and useful sire Street Boss (Street Cry {Ire}) subsequently brought $70,000 from Castleton Lyons, in foal to Congrats, at the 2014 KEENOV sale.