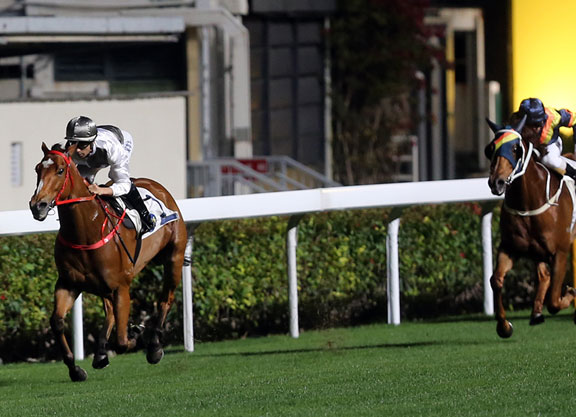 Making his first appearance in Class 2 Wednesday evening at Happy Valley, Ivictory (Aus) (Mossman {Aus}) put on a brazen display of speed to break the course record for 1200 metres, stopping the timer in 1:08.52 in scoring by 2 3/4 dominating lengths (video). The final time bettered the previous mark of 1:08.70 set by Tiger Prawn (SAf) (Goldkeeper) in 2007.

“Track record? That's about as good as it gets,” a grinning trainer John Size told the Hong Kong Jockey Club's Andrew Hawkins. “No need for me to say anything, right?”

Kicked straight into the lead from barrier six by Joao Moreira, the $1.50 (1-2) favourite dictated terms in advance of chief market rival California Whip (Giant's Causeway) and despite setting generous fractions, tossed in a final quarter-mile in :22.23 while scarcely being asked to do so.

“The impressive thing with this horse is that with his trackwork and on trials this preparation, I thought he would be my next sprinter, and he has not let me down,” Size told Hawkins. “He had time off with a bone disorder, I gave him four months on the sidelines and let him recuperate slowly. If he came back sound, I knew he'd make good progress. Well, he's been sound obviously this time in.

Size added, “He had to do a little work to cross, he's probably been four deep on the first turn, but his weapon is that he comes back underneath his rider and he can rate him, which means you can use him early and then he will come back.”

Ivictory was bred in New South Wales by J. Woods and made two trips through the Magic Millions sales ring, selling for A$67,500 at the 2014 National Weanling Sale through The Old Crossing agency before fetching A$80,000 from Aquanita Racing as Gold Coast yearling some seven months later. The bay was consigned on that occasion by Fig Tree Thoroughbreds.