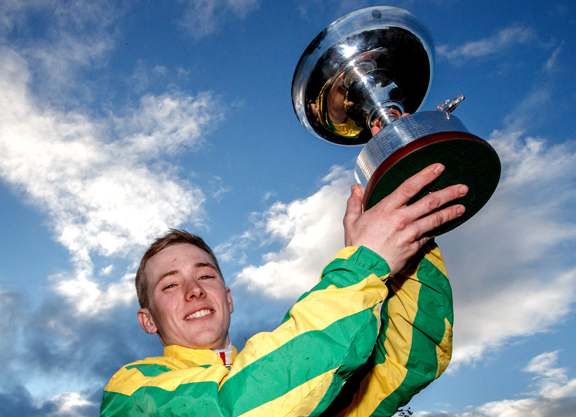 2014 Irish champion apprentice Colin Keane won his first Irish jockeys' championship over former champion Pat Smullen Sunday. Signing off with an even century of winners, the 23-year-old rode a double Sunday, and with the help of the in form Ger Lyons yard, never let Smullen close throughout the season. The latter rode 88 winners, with Donnacha O'Brien in third with 62 winners, while Kevin Manning notched up 59.

Oisin Orr, 20, earned the champion apprentice title on the back of 20 winners, one ahead of Killian Leonard. The injured Ana O'Brien was third with 18.

Aidan O'Brien, fresh off a victory in the GI Breeders' Cup Juvenile Turf with Mendelssohn (Scat Daddy) at Del Mar on Friday, earned his 20th flat champion trainer title. O'Brien set a new world record mark for single season Group 1 wins, with 27, and also scooped four of the five Irish Classics–barring the Irish Oaks–with the help of the top-class Ballydoyle string among his many season highlights.

Suzanne Eade, Chief Financial Officer of Horse Racing Ireland, was on hand at Naas Sunday to present trophies to the champions.

“I would like to congratulate all of our champions for their performances on the track this season,” said Brian Kavanagh, Chief Executive of Horse Racing Ireland. “Domestically the 2017 season will forever be remembered for the tremendous battle served up by Colin Keane and Pat Smullen in the Irish champion jockeys' title. [Keane's] skill has been evident in recent seasons and he proved this season that he is right up there with the best riders on the international scene. I'm very proud of the achievements of Irish-bred horses, our riders and our trainers at home and abroad, and special mention, at the official close of this flat season, must go to Aidan O'Brien and his team, for the outstanding achievement in setting a new world record for Group/ Grade 1 wins in a calendar year.”