Irish Derby Next For Eminent 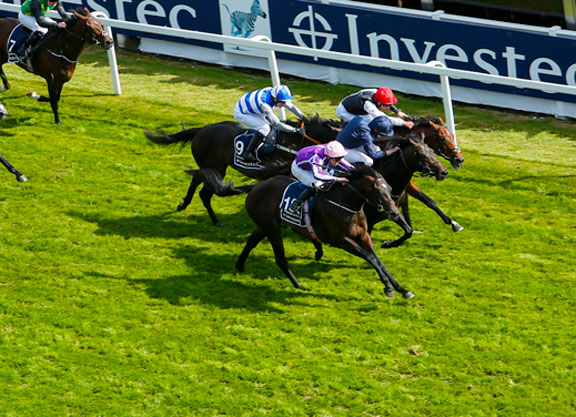 The Eminent (Ire) (Frankel {GB}) team of Jim Crowley and Martyn Meade are already looking forward to the colt's next assignment following his highly creditable fourth in the G1 Investec Epsom Derby. Sir Peter Vela's 3-year-old improved on his G1 QIPCO 2000 Guineas effort and was beaten just over a length in the end despite being squeezed for room in the closing stages. Now that Eminent has proved he gets a mile and a half the G1 Dubai Duty Free Irish Derby at The Curagh July 1 will be his next target. Jim Crowley thinks he can improve on his Epsom effort in Ireland in four weeks time and said, “He's a big horse and going that speed around Epsom caught him out a little bit. The Curragh and the Irish Derby will suit him 100 per cent.” Reflecting on his Epsom run Crowley added, “He ran a really good race but they went a really good pace and he didn't travel that well for me – I followed Frankie on Cracksman who was off the bridle as well but once I got him out in the straight he picked up well. I got out in plenty of time and he didn't have the gears of the two who came from behind and being squeezed late has only cost him third place – he wouldn't have beaten the first two anyway.” The Irish Derby has the makings of a fascinating renewal this year. In addition to the likely Ballydoyle battalion heading that way, including Saturday's winner Wings Of Eagles (Fr) (Pour Moi {Ire}), John Gosden has also indicated his intention to target the race with Cracksman (GB) (Frankel {GB}). However this will not deter Martyn Meade from seeking his first Group 1 win as a trainer, “It wasn't his day [on Saturday] and we're disappointed in one sense but thrilled to bits that he finished so close. We know he gets the trip and we'll go for the Irish Derby now,” Meade said. A further postscript to the Derby was the possibility of runner up Cliffs Of Moher (Ire) (Galileo {Ire}) dropping back to ten furlongs for his next potential target, the G1 Coral Eclipse at Sandown July 8.