Home » Archive » Today's Edition » Shalaa In Command In the Richmond

Shalaa In Command In the Richmond 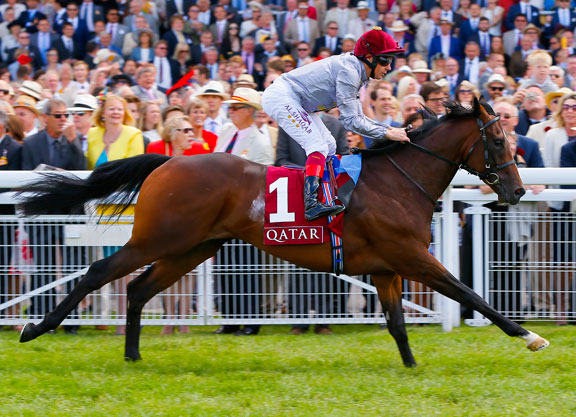 Forced to race under a three-pound penalty as a result of his success in the G2 July S. at Newmarket July 9, Shalaa made light of the burden to significantly enhance his reputation with a command performance in this renewal which remained competitive despite the scratching of another Ballydoyle raider in the G2 Coventry S. runner-up Air Force Blue (War Front). Tanking to the front from the break under a motionless Frankie Dettori, the bay had all rivals under pressure as he cruised past the quarter pole. With only Tasleet able to get to his flanks, he powered away without being fully extended and was in hand at the line to register a facile success from the Shadwell runner and the July S. runner-up Steady Pace, who was much more soundly beaten here than on the July Course. Every outing has seen Shalaa make great progress from his debut last of eight in the six-furlong Olympic Glory Conditions S., for which he was a notable runner on Newbury's Lockinge card which his owners played a major hand in boosting May 16. Leaving that introduction far behind when taking a Newmarket maiden a fortnight later, he surprised a few with a direct display of speed while exhibiting marked greenness to take the July S. just 10 days later and he duly justified an abundance of confidence in his prospects with this exhibition. “We think the world of him–he has lots of speed and can quicken off it,” his rider said. “I would have been happy to take a lead, but there was nothing fast enough to so I had to make my own way home. He was a bit hot and temperamental, but is enjoying it now–he's getting a lot better and is in a good place. Something like the G1 Prix Morny [at Deauville Aug. 23] on good ground will be his target.” Trainer John Gosden is not looking to stretch Shalaa out for the mile Classics, identifying the newly opened sprinting route for 3-year-olds featuring Royal Ascot's G1 Commonwealth Cup as his domain. “He's very quick, but funnily is relaxed at home and will sit behind and go to sleep,” the conditioner said. “When the races are on, he's off and racing and to win like that he must be a very fast two-year-old. I think the fact Frankie has traveled easily for so long is quite an achievement. He wasn't mentally ready for Royal Ascot and he reminds me a lot of Oasis Dream–he's that type. We can look at the Prix Morny if it's nice ground and then the G1 Middle Park S. [at Newmarket Sept. 26]. We're not going to take him to seven furlongs and next year I see him staying at six and having the Commonwealth Cup as a huge target. I don't see him as a miler–he enjoys sprinting, so let him sprint.” Runner-up half Tasleet will head to York's Ebor meeting now according to Sheikh Hamdan bin Rashid Al Maktoum's assistant racing manager Richard Hills. “The winner is a very good horse and we are really pleased with how our horse has performed,” he said. “I think he will go to York next for either the [Aug. 22] G2 Gimcrack S. or the sales race–he is entered in both.”