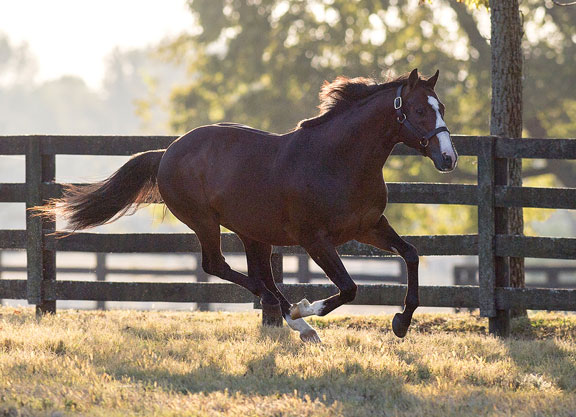 With another productive weekend, which included a victory by the impressive first-time starter and “TDN Rising Star” Life Is Good at Del Mar, Into Mischief has set a new Northern Hemisphere record for most single-season earnings by a sire. According to TDN sire stats, Into Mischief's offspring have earned $19,994,815 this year. The record had been held by Tapit, whose progeny earned $19,914,317 in 2016.

A win Saturday at Churchill Downs Saturday by Asar in an $85,000 maiden special weight race, moved Into Mischief into the top spot. He added to his totals with a win Sunday by Valletta in a $40,000 maiden claimer at Aqueduct and then picked up another $34,200 when the Bob Baffert-trained Life Is Good romped to a 9 1/2-length win as the 1-5 favorite in the betting.

“He's a remarkable horse,” said Spendthrift Farm General Manager Ned Toffey. “There's not a lot left to say about him. He's shown that he can get any level of horse and at the same time is very consistent. That's what has allowed him to get to the level he has gotten to. He is so good mentally. Such a high percentage of the mares he breeds result in, first of all, a live foal, and, second of all, a good sound foal. They get to the racetrack and they perform. He's been prolific at doing that and the offspring have been prolific at doing their job from a consistency standpoint and a brilliancy standpoint. We are proud to be associated with him.”

In addition to the earnings record, Into Mischief leads all stallions in several categories for the year. They include number of winners (178), wins (266), black-type winners (28), and black-type performers (58). With three Grade I winners, he is tied with Speightstown, Violence, War Front  and More Than Ready for the top spot in that category.

Into Mischief's 2020 accomplishments will almost certainly include a Horse of the Year title. With his wins in the GI Haskell S., the GI Kentucky Derby and the GI Breeders' Cup Classic, Authentic is a clear favorite for that title. He, alone, accounts for $6,160,000 of the total earned by Into Mischief's offspring this year.

“Authentic is the horse that checked the last box in terms of his ability to get a Classic horse,” Toffey said. “That was the one question people still had about him, as remarkable as he has been as a sire. He started off at such a low price point, so the mare quality back then was not exactly stellar. But the great stallions seem to be able to overcome that. As he has added quality, you see the results of that. And the quality only continues to improve. As the mares have improved, you are starting to see these Classic-type of results. Authentic has very much demonstrated that.”

Into Mischief's year also included a win in the GI Breeders' Cup Filly & Mare Sprint, the GI Acorn S. and the GI Test S. by Gamine and a win by Dayoutoftheoffice in the GI Frizette S.