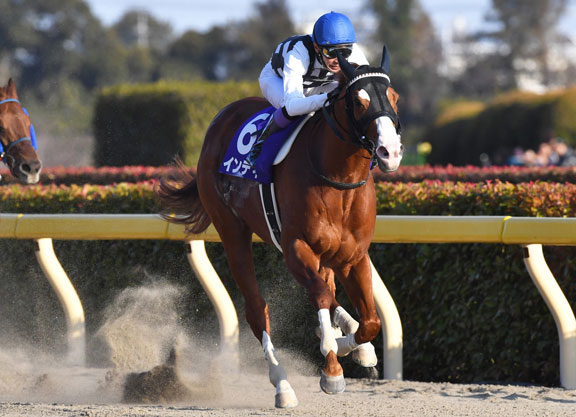 Sunday's G1 February S. marks the return of Group 1 action to Japan, and while the February-one of just two dirt Group 1s in the country-is missing last year's G1 Champions Cup winner and Dirt Horse of the Year Chrysoberyl (Jpn) (Gold Allure {Jpn}), who will fly the flag in Saudi Arabia next weekend, the 1600-metre contest sees Inti (Jpn) (Came Home) look to go back to back in a race that offers automatic entry into the $6-million GI Breeders' Cup Classic at Keeneland on Nov. 7 as part of the Breeders' Cup Challenge Series.

Inti's career high victory here 12 months ago was the culmination of a seven-race winning streak, but the 6-year-old hasn't won since. He has not been disgraced as of late, however, finishing a narrowly beaten third in his last two outings, the Champions Cup on Dec. 1 and the G2 Tokai S. on Jan. 26.

Inti is the 3-1 second choice in the betting behind the 6-year-old Mozu Ascot (Frankel {GB}), who finished first or second in nine of his first 12 starts in 2017 and 2018 on the turf and is the 2-1 favourite. While his form faltered a bit last season he was rarely far out of it, and he appeared rejuvenated trying dirt for the first time on Feb. 2 when winning the G3 Negishi S. going seven furlongs.

The 5-year-old Arctos (Jpn) (Admire Aura {Jpn}) tests Group 1 waters for the first time, but the bay has a daunting record over the Tokyo dirt, having won five of his six starts over the course, all between seven furlongs and a mile. Another to keep an eye on is Sunrise Nova (Jpn) (Gold Allure {Jpn}), who is a three-time stakes winner over this course and distance. He looks to bounce back from a fifth in the Listed Musashino S. on Nov. 9 in his seasonal debut.