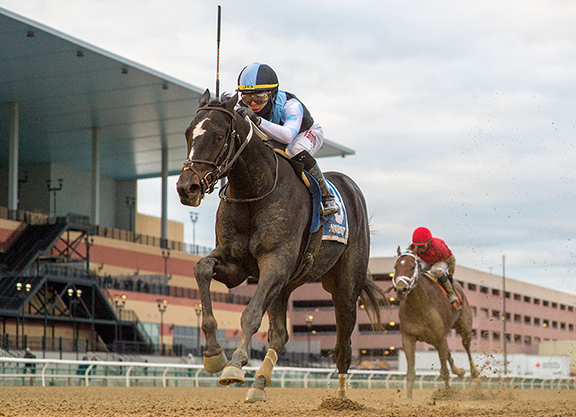 Undefeated and impressive in all three of his career starts thus far, Independence Hall (Constitution) has earned respect as one of the top early choices for the GI Kentucky Derby. Saturday, fans will get a much clearer picture of whether that stature is justified, as the Mike Trombetta trainee heads south to take on a quality field in the GIII Sam F. Davis S. at Tampa Bay Downs.

Sent off as a 7-5 favorite debuting in a seven-furlong event on the GI Pennsylvania Derby undercard at Parx, the dark bay broke slowly, but recovered quickly and ran away to an easy 4 3/4-length score. Stepped up into stakes company in the GIII Nashua S. Nov. 3 at Aqueduct, the $100,000 Keeneland September grad produced arguably the most impressive performance of any 2-year-old in 2019 when blowing the doors off his competition with a 12 1/4-length romp.

Even in that brilliant performance, Independence Hall showed some immaturity, shying from the whip several times, and he displayed that greenness further Jan. 1 at Aqueduct in the Jerome S., acting up in the paddock, breaking slowly and again drifting from stick-handling. It speaks to the colt's talent then, that he still won by four lengths, but the waters get significantly deeper in the Sam Davis, which will be Independence Hall's first two-turn test. He shipped down to Oldsmar in early January to get accustomed to the track and has breezed four times locally, highlighted by a five-furlong bullet in 1:00 flat (1/34) Jan. 26.

Second choice on the morning line behind the 6-5 Independence Hall is Sonata Stable's Premier Star (Tapiture), pegged at 3-1 as the likely speed. Debuting at seven panels Dec. 8 at Gulfstream, the $100,000 OBS June buy dueled with Caracaro (Uncle Mo) and wore that foe down for a 1 3/4-length decision despite being carried out significantly. That result was flattered when Caracaro returned to earn 'TDN Rising Star' honors with a six-length graduation Jan. 11, and Premier Star himself validated his graduation with a 5 1/4-length, wire-to-wire score Jan. 15 in Hallandale to pick up a 'Rising Star' badge of his own. The chestnut switches to Hall of Famer John Velazquez after being piloted by Irad Ortiz, Jr. in his first two starts, and drilled a half-mile bullet in :48 flat (1/15) for Jorge Navarro Feb. 1 at Gulfstream West.

Shadwell Stable's Ajaaweed (Curlin) makes his 3-year-old debut after finishing his juvenile season on a high note. An even fifth to open his account at six furlongs Aug. 10 at Saratoga, he earned his cap and gown when stretched out to a mile Sept. 11 at Belmont. Somewhat disappointing in finishing a distant fourth in Keeneland's GI Claiborne Breeders' Futurity Oct. 5, the homebred closed ground over a speed-favoring track to just miss by a half-length in the GII Remsen S. Dec. 7 at Aqueduct. Regular rider Joel Rosario is in for the mount aboard the bay, who capped preparations with a five-furlong breeze in 1:00 3/5 (2/4) Jan. 31 at Palm Meadows.

Sole Volante (Karakontie {Jpn}) is an intriguing potential upsetter. Rallying to a three-length victory debuting over the Gulfstream West turf Oct. 12, the $20,000 OBS April bargain was extremely impressive when passing 10 horses in a last-to-first upset of the grassy Pulpit S. Nov. 30 at Gulfstream. Similarly to what he's done with turf-to-dirt success Ete Indien (Summer Front), a strong runner-up in last Saturday's GIII Holy Bull S., trainer Patrick Biancone gave Sole Volante a chance on the main track and he delivered, closing to be a good third in the Mucho Macho Man S. Jan. 4 in Hallandale. That effort was good enough for a 90 Beyer, bettered in this field only by Independence Hall's 101 in the Nashua. Bought into by Reeves Thoroughbred Racing since then, the gelding shows several eye-popping works on the Palm Meadows lawn, following up a seven-furlong breeze in 1:22 1/5 (1/5) Jan. 20 with a five-panel bullet in :58 1/5 (1/17) Feb. 3.

Chapalu (Flatter) stands an outside chance in his first dirt try. Runner-up as the heavy favorite at first asking sprinting on the Laurel turf Aug. 1, the Beverly Anderson and Edward Seltzer homebred was sharp in victory going a mile on the Keeneland sod Oct. 6, a race out of which the second, third, fourth and eighth-place finishers came back to win. The bay repeated with a wire-to-wire conquest of the GIII Grey S. three weeks later at Woodbine, but would need to produce a career high to prevail here.