In Their Footsteps: Riley Mott 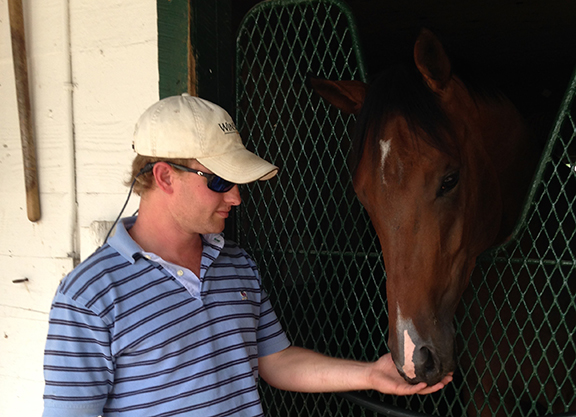 Editor’s note: this is the first in a series of feature articles on young people in racing who have followed in their parents’ career-paths in the industry.

If Teddy Roosevelt’s advice to “speak softly and carry a big stick” was applied to horse racing, he’d have found few that fit that description better than Bill Mott. The Hall of Fame trainer lets his talented horses’ abilities do the talking. Now, his son Riley is taking the reins as an assistant trainer, proving himself a talented conditioner much in the mold of his father.

His cool and collected attitude belied by an occasional boyish grin, ruddy complexion, and bright blond hair peeking out from beneath a worn ball cap, Riley moves about the barn with the assurance of a trainer three times his age. At twenty-five, Riley has been a constant presence on the Mott shedrows for nearly two decades.

“When I was really young, on summer vacations, I would go to the barn with my dad just to expend some energy because I needed to get out of the house a little bit,” he recalled. “That kind of evolved into having a little more responsibility step by step, and I really began to love it to the point where I wanted to make it a career.”

That decision, he said, came at the age of nine or 10. Each year, the Motts would bounce around along the East Coast. They started at Belmont in the fall and moved to Florida in the winter, then back to New York: Long Island in the spring and Saratoga in the summer.

Riley said he loved it, recalling, “We had our own little racetrack group of friends; the Clements, the Migliores, and so on, and all the trainers’ families and all that.”

Today, he lives a similarly transitory lifestyle, starting the year at Santa Anita Park, moving to Keeneland for the October and April meets, then wintering at Payson Park in Florida. The horses have always been a family affair for Bill, his wife Tina, and their two sons, the elder of whom, Brady, chose a career away from racing.

“They’re fully aware it’s a tough business,” Riley said while supervising several post-workout cooldowns. “My parents never really encouraged me to go into the horses, but they never discouraged me from it at all. They really just wanted to let me follow my path and my own desires, so I really respect that on their end, to kind of let me feel it out…I never felt any pressure whatsoever to quote-unquote follow in my dad’s footsteps or anything like that.”

But he added that he would be lying if he said he didn’t hope to achieve such success.

“I guess it would be a little unfair to myself to try to think that I would duplicate anything he’s done, but I mean, that’s my dream, for sure,” he said.

Riley had no trouble adjusting to a trainer’s early hours upon joining the stable full-time after graduating from the University of Kentucky.

“I wake up before the majority of America does,” he said, laughing, quoting a favorite saying of his father’s. “It’s really not a bad job. You work half-days every day. Five to five, and the rest of the day is yours.”

This father-son relationship is both a fruitful and an easy one.

“You know, for one, he’s sort of like my best friend more than anything,” Riley said. While the two goof around at home, it’s all business at the barn, though Bill’s son can make his dad crack a smile in stressful situations.

Sadly, Riley said he didn’t have personal memories of his father’s greatest runner, two-time Horse of the Year Cigar, but added that he does feel like he knew the champion, having grown up at his father’s knee.

“I was about three and four years old when he was running,” he said ruefully. “But, I mean, I do have great memories of visiting him at the [Kentucky] Horse Park before he passed away…I’m so fascinated by him and his career and everything…I’m so thankful for the horse, not only because he was a world champion, but just what he did for my family. My dad already had a pretty successful career leading up to that, but that that’s really what put him in the Hall of Fame echelon. And Mr. [Allen] Paulson was such a great supporter of my dad and he was just really had a great operation and was great overall.”

Like Riley’s own pedigree, many Mott trainees reproduce their quality.

Multiple graded stakes victress Delta Princess, in particular, had a nasty temper, as did Royal Delta. Riley said he remains humbled to be in the presence of multiple generations of greatness.

“One of my favorite things to do is look up all the Juddmonte pedigrees and just kind of bookworm their whole operation,” he said.

2016 was a successful year for the Motts and their clients, capped by WinStar Farm and Gary Barber’s Tourist (Tiznow)’s win in the GI Breeders’ Cup Mile at Santa Anita Nov. 5. During the summer months at Saratoga, Bill was inducted into the track’s Walk of Fame and Tourist earned his first win at the highest level in the GI Fourstardave H. The barn tallied five total Grade I wins in 2016, from Del Mar to Saratoga. Three Chimneys Farm’s ‘TDN Rising Star’ Carina Mia (Malibu Moon) captured the GI Acorn S. and hit the board in three more Grade I events.

“You know, we’ve been very, very lucky to have a number of nice horses and some very loyal owners that we really enjoy working with,” Riley observed.

Eventually, Riley said he planned to branch out on his own.

“My dad and I joke sometimes that he’ll be my assistant one day–I’m really content with where I am right now,” he said. “But my dad always told me that you can go out whenever you want, take a couple horses from this guy, this guy, this guy, but it’s really about waiting for the right opportunity. So I think good things will happen if you just wait. I’m not really in any hurry to rush into anything.”