In Their Footsteps: Phil Hager 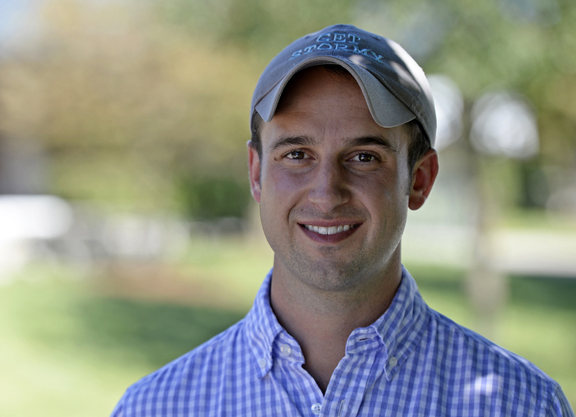 30-year-old Hager grew up on one of the Bluegrass's most storied properties–Idle Hour Farm. Hager is the son of David Hager, formerly of Idle Hour Farm and 2009 Kentucky Thoroughbred Farm Managers' Club Farm Manager of the Year, and great-nephew of Idle Hour founders Julian and Margaret Hager Rogers. In her own name, Mrs. Rogers bred full brothers Ribocco and Ribero, back-to-back winners of the Irish Derby and English St. Leger in 1967 and 1968, respectively.

Hager and his 26-year-old twin sisters, Hunter and Claire, grew up in Paris, Kentucky, on the Idle Hour property. They watched their father breed graded stakes winners like Custom for Carlos (More Than Ready), Go Noni Go (Get Stormy) and Lovely Bernadette (Wilburn), prep yearlings for sales, and break horses. Like many other youngsters reared on family farms, Hager was put to work in the stables at an early age.

“I think I always loved horses, for sure,” Hager said. “I don't know, I thought for sure I'd make my living in it until I got into high school or college.”

Hager attended the University of Kentucky, majoring in business to round out his existing equine education.

“Horses like Custom for Carlos, when they were running, that obviously piqued your interest a lot,” Hager said. “I remember, we had a couple yearlings sell really well at the sale, and that always piqued your interest, too, because the farm obviously is a lot of work and you kind of get in the routine of doing the same thing over and over again.”

Of his time working with Ingordo, Hager said, “The cool thing about David–David is a guy that doesn't talk a whole lot. He's very serious, but he was a very good teacher if you learned to listen.”

To understand what he was looking for in a yearling, Ingordo would allow Hager to inspect his own “short, short list.” Hager recalled, “That kind of ingrains in your mind: 'That's what kind of horses you need to be buying.'” During his time working with Ingordo, the boss purchased such standouts as Bodemeister and Paynter.

Hager read as much about pedigrees as he could and consulted experts like his godfather, pedigree expert Ken McLean, formerly of Overbrook Farm. In January 2011, he began work at the McLean family's Crestwood Farm in Lexington.

“I helped sell kind of everything that they had there [like stallion seasons], but I also helped recruit some stallions,” Hager said. “Get Stormy (Stormy Atlantic) was a horse that I helped bring in.”

Hager seeks out good racehorses that might fly under the radar price-wise and can produce good breed-to-race runners for breeders. Turf star Get Stormy, for example, might not seem like the most commercial horse.

“We saw him run at Keeneland quite a bit and he was just a good racehorse, obviously, but he had a lot of speed and I know that was one thing we liked about him,” recalled Hager, who eventually reached out to Get Stormy's trainer Tom Bush. “We had a very good conversation. At the time, they had a couple options of where to stand him.”

Hager also recruited Texas Red, a GI Breeders' Cup Juvenile-winning son of Afleet Alex who brings pedigree and performance to the table. Though certainly not the most regally bred horse, the colt is ideal for Crestwood's price range and breed-to-race ethos.

“Because we don't have a huge budget to go after the champions of a generation, things like that, we kind of have to find horses that fly under the radar a little bit,” Hager said. “Texas Red is a very nice-looking horse. Obviously he had a ton of talent, won the [2014] Breeders' Cup Juvenile easily and then came back and won the [2015 GII] Jim Dandy S. He had a couple setbacks, unfortunately–that probably cost him.”

In 2013, Hager left Crestwood for several months to work for trainer Bill Mott, soaking up the presence of stable stars such as Royal Delta and Ron the Greek. Along with Mott's assistants– including his close friend and Mott's son, Riley–Hager would work grueling hours of 4:30 a.m. to seven or eight at night.

“When I was working for [Mott] and the Saratoga sales were coming up, I asked Bill, 'Would you care if I went after training to look at yearlings over there?'” recalled Hager, who eventually proved his sales acumen to the Hall of Fame trainer and became his buyer at the sales.

The snowball effect continued through his association with Mott, with Hager expanding his client base to add Jerry Crawford of Donegal Racing, Christophe Clement and George Isaacs of Bridlewood.

“Obviously, that would have never happened if it were not for Bill taking a shot on me, so it meant a lot,” Hager said.

Soon enough, Hager decided it was time to go out on his own and, with the launch of Taproot Bloodstock, has been able to focus in on horses that offer affordability and athleticism.

Throughout his young career, Hager has taken his mentors' lessons to heart.

“In this business, you can go a long way by just being humble and honest and keeping your head down and working hard,” Hager reflected. “I think that's really probably the most important thing, especially working under people like Neil Howard at Gainesway and Bill Mott and even at Crestwood. Guys like that–they do most of their talking with their horses and their work ethic.”