In Their Footsteps: Bo Bromagen 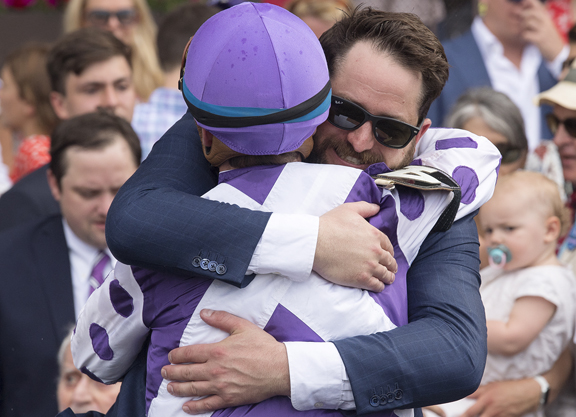 Glenn “Bo” Bromagen might bear the same name as his dear old dad, but he’s very much his own (horse)man. A bloodstock agent and racing manager for his family’s Ashbrook Farm in Versailles, Ky., Bromagen came about working with horses in a unique way.

The 36-year-old said, “Honestly, when I was growing up, my dad owned a few and it’s more of kind of a spectator sport for me as a kid. We didn’t have horses on the farm; we had cattle growing up.” And by the time Bromagen graduated from Trinity University in 2007, his dad had mainly gotten out of Thoroughbreds…but that was about to change.

Glenn Sr. decided he wanted to get back into the business, calling trainer George “Rusty” Arnold II, a family friend, and bloodstock agent David Ingordo. At the 2007 OBS April Sale, Ingordo picked out a good-looking chestnut from the first crop of Macho Uno and bought him for $75,000. Glenn Sr. raced the Florida-bred colt, named Wicked Style, to a sterling 2-year-old campaign. Wicked Style captured the GIII Arlington-Washington Futurity and GI Lane’s End Breeders’ Futurity before finishing off-the-board in the GI Bessemer Trust Breeders’ Cup Juvenile.

“That was the year I graduated from college and kind of got to see the horse run his first couple races,” Bromagen recalled. “There was just this overwhelming pull to be in this business, like everything from childhood came back.” He added, “And when he won the Breeders’ Futurity, it occurred to me, like, maybe I can do this for a living?” But he admitted, “The only thing I knew is how much I didn’t know.”

Bromagen started out by reaching out to Arnold that fall. “I started walking hots for him,” he recalled. “I started at the bottom.” He learned the ropes from Arnold and the trainer’s wife, former exercise rider Sarah. Bromagen said, “The familiarity there and mutual respect is something that I could appreciate.” Working under his dad’s longtime cohort proved a wonderful experience. He noted, “You kind of feel like you’re part of the team there when you’re doing this sort of thing. This mutual effort and kind of pushing things together, it is very rewarding, I think, not to mention educational.”

Bromagen estimated he walked hots for three to four months, before working his way up to groom and eventually barn foreman. He reflected, “Well, for one, you’ve got to have patience, you know what I mean? When you’re working with horses, they don’t exactly speak English. You’ve got to just continue to do the right thing with them and eventually stuff will kind of come around[….]” He mused, “This industry comes in waves, successes and failures.”

He said, “I knew that training horses wasn’t going to be what I ended up doing, but I needed that education, that hands-on, background experience, that could benefit me in whatever I did choose to do.” He interned for Keeneland’s racing and sales office for nine months before spreading his wings to work with Ingordo. Five days into working the 2-year-old sales, Bromagen said, he knew he’d found his calling in inspecting youngsters. “It was just the act itself, the selection process,” he said. “You’re seeing all these prospects and you’re working to figure out which is the best one.”

While working under Ingordo, Bromagen cultivated strong relationships with mentors and clients. “David is incredible at what he does,” he mused. “He’s had so much success, but through David, I’ve worked with a couple of guys like Mike Shannon, George Seabo, the Mayberrys. All these people are incredibly experienced and so smart in what they do, but even more than that, [they are] such good people to be around,that, even when the day is just dragging on, these guys’ll just make your smile.”

After working with Ingordo for five years, Bromagen branched out as the racing manager for his family’s Ashbrook Farm and bloodstock agent for the BBN Racing partnership. In these capacities, he works closely with family and friends. “Well, in this business, the success that you have or can’t have is so much more rewarding when you can share it with people,” he reflected, “especially people you care about, for that matter. So I don’t know if it was always in the back of my head, but I guess I kind of knew that I wanted to work out on my own and also represent the farm in that capacity.” He added that this can mean having “some contentious conversations” with people close to you. “But I think it’s also the fun of it,” he said. “Nothing in this game is easy, right?”

Ashbrook acquired a Colonel John filly for $180,000 at the 2012 Keeneland September Yearling sale. Bo, his sister Ashley, and their mother, Sandi, bought the youngster from Glenn Sr. and raced her in the name of their farm. Given the moniker Southern Honey, the bay filly went on to win the 2014 GIII Winning Colors S. at Churchill Downs. Now a broodmare residing at Ashbrook, Southern Honey had a foal by Union Rags this year.

Another of Bromagen’s first acquisitions for Ashbrook was Weep No More. He said, “So working the 2-year-old sales I’d been buying a couple of years and we went to [2015] OBS [March] and the Mayberrys sent this horse down the lane who didn’t go lights-out.” He knew that April and Jeanne Mayberry raised good, honest horses and reflected, “To a certain degree, I felt more confident in buying a horse off of them just because I was familiar with who they were as a consignment and who they were as people.” Bromagen paid $120,000 for the Mineshaft filly, whom he sent to Arnold; the trainer teasingly told his protege, “Well, you know this one can’t be any good because she’s too pretty.”

After finishing off the board in her sole start at two, Weep No More came to hand in the spring of her sophomore season. She broke her maiden in January, tallied the black-type Suncoast S. in February and annexed the GI Central Bank Ashland S. in April. That last win came at Bromagen’s home track of Keeneland. “I don’t think I can actually put it into words what the feeling was like, whatever it is,” he said. “I don’t even know what the feeling is. It was like an explosion.” Mom Sandi said proudly, “Bo has proved over and over our support of him and our confidence in him.”

Bromagen credits the success to hard work and good training. “You’ve just got to put in the hours, just look at more horses, more horses, more horses, more horses, and then ask questions of everybody. I still talk to Ingordo on a regular basis.” But he also sagely knows his place in the market; because he can’t afford number-one prospects that everyone goes after, he said, “So I’ve got to find the hiorse with that frame that can grow into that, will be that great, strapping horse later…” He also takes shots on sires or young mares that haven’t yet had massive opportunities.

Bromagen’s got quite the way with the ladies, as evidenced by Weep No More and another prime acquisition: Concrete Rose. At the 2018 Fasig-Tipton Midatlantic Sale of 2-Year-Olds in Training, in Timonium, a dark bay filly caught his eye. “As she came past me, it looked like she was going great[….]” Galloping on the wrong lead, her head cocked, she moved greenly, but once past the grandstands, she leveled out into a great rhythm. A solid physical, the daughter of Twirling Candy came home with Bromagen for a mere $61,000. He quipped, “You love the fact that she didn’t have the greatest breeze in the world; otherwise, I wouldn’t have been able to afford her.”

Named Concrete Rose, the filly races for Ashbrook and BBN Racing, the latter buying in after her maiden victory. At two, she won the GII JPMorgan Chase Jessamine S. and at three went undefeated in four starts at four different tracks. In 2019, Concrete Rose registered victories in the GIII Florida Oaks at Tampa Bay Downs, GIII Edgewood S. at Churchill Downs, the GI Belmont Oaks Invitational and the $750,000 Saratoga Oaks Invitational S. She has won six races from seven starts and earned $1,218,650.

Given that she races for his family and a partnership for whom he selects horses, Bromagen wanted the horse to match up. “I felt a lot of pressure up there to have her perform for these guys [… ] and for her to do what she did, it was almost relief as opposed to celebration, if that makes sense.” Brian Klatsky and Brendan O’Brien founded BBN Racing a few years ago; Braxton Lynch serves as racing manager, Vicki and Phil Oliver and Rusty Arnold train its runners, and Bromagen is a bloodstock agent and consultant. “They’ve got an incredible group of people that have bought into this partnership,” he enthused. “I bought a share and Rusty and everybody’s taken a share.”

Watching father and son work together is a highlight for Sandi Bromagen. She said, “They seem to have that same crooked sense of humor that makes it fun for them and I think this has been a very enjoyable, gratifying part for Glenn to watch Bo work. And he really likes watching Bo and Rusty work together.” She added, “But Rusty taught Bo a lot. Another gratifying thing is I heard Rusty say one time about looking at horses, something to the effect that, ‘Bo knows what I like. I feel comfortable about what Bo picks.” Glenn Sr. is equally delighted at his son’s success. “You wouldn’t believe how proud I get of him and the horse,” he said.

Most of Bromagen’s day-to-day duties are for Ashbrook, but at the sales, he identifies top-quality prospects for either client. He said, “I want to find those athletes and I think–I mean it’s tough to manage expectations of clients and what they’re looking for.” BBN has 10 to 11 runners, while Ashbrook maintains 11 horses in training, including a few in partnerships. And with Bromagen selecting their runners, the sky’s the limit for both operations.