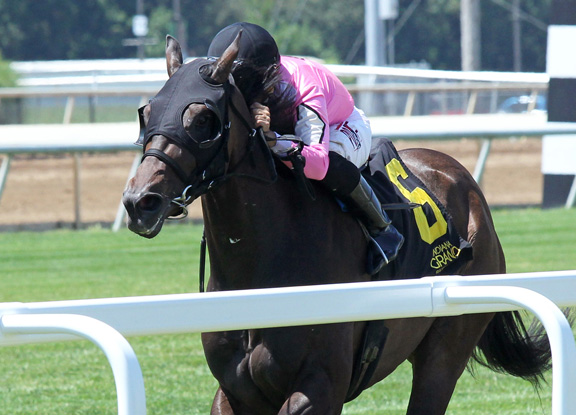 Butter Hut (Interactif) stamped himself as one to watch with a powerhouse, front-running debut victory sprinting over the Indiana Grand turf course last Friday.

Listed at 10-1 on the morning-line, he went off at odds of 3-1 thanks to a flashy worktab, which included three bullet drills at Keeneland for trainer Lee Thomas. The 3-year-old Louisiana-bred, owned and bred by Keith Plaisance, earned a gaudy 88 Beyer Speed Figure for the eight-length tour de force.

“When you see those works in the morning you get excited, but there's still so many questions when you're going into that first race,” Thomas said. “You're just looking for him to be professional walking over, getting saddled and loading into the gate. Once he broke on top, it was a bit of a relief. It was his race after that. It was great.”

Butter Hut has returned to Louisiana while Thomas and Plaisance work on a game plan moving forward. The 34-year-old conditioner currently has 36 horses in training at Evangeline Downs and another eight at Keeneland.

“We're going to take our time and progress with him,” Thomas said. “He's a Louisiana-bred and came out of the race really well. That's always the first major hurdle to overcome. We don't really have a spot picked out for him going forward. He's got a really great owner in Keith Plaisance and he's going to let the horse develop and find his own way.”

Plaisance is the owner of Pacific Gulf Wire Rope, a leader in the wire rope and rigging industry. He purchased Butter's Hut's three-time winning dam Spun Ribbon (Hard Spun), a daughter of the lawnmower Take the Ribbon (Chester House), for $185,000 at the 2010 Keeneland September Yearling Sale.

“Keith has been very successful down here on the Louisiana racing scene, but he's trying to branch out now,” Thomas said. “He's looking forward to putting his horses out there on more of a national level.”

“I really started out training for my mother [Michele Rodriguez] and our family–she owns Elite Thoroughbreds down in Folsom, Louisiana,” Thomas said. “We've been branching out from Louisiana. This was our first year that we've also run in Texas, Indiana, Kentucky and Oklahoma. It's been an exciting year.”