Improbable Romps In the Awesome Again 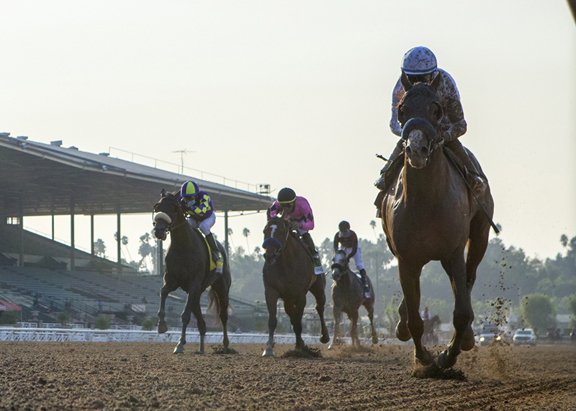 The lesser-fancied of the Bob Baffert-trained duo, 'TDN Rising Star' Improbable (City Zip) was uncustomarily taken well off a fast early pace, began to hit his best stride while wide on the second turn, inhaled the leading group in upper stretch and rolled home to defeat odds-on Maximum Security (New Year's Day) by 4 1/2 lengths in the GI Awesome Again S. at Santa Anita.

Though he hadn't been more than two lengths off the early pace in any of his last four races, Improbable was taken back to last by Drayden Van Dyke as Take the One O One (Acclamation) set a fast pace, clocking fractions of :23.33 and :46.36, with Maximum Security in hot pursuit. Improbable began to catch the eye midway on the final turn, rolled five wide under a full head of steam into the stretch and powered clear.

Maximum Security, with Luis Saez back in the saddle, won the battle for second while tasting defeat for the first time since the Pegasus S. last January. He was perfect in two prior attempts since joining the Bob Baffert barn, including a powerful score in the GI TVG Pacific Classic S. last time Aug. 22.

The Awesome Again was the second Breeders' Cup Challenge race win for Improbable in 2020, who previously earned his way into the GI Breeders' Cup Classic with his victory in the GI Whitney S. at Saratoga last month.
The beaten favorite in last term's GI Kentucky Derby and GI Preakness S. kicked off 2020 with a runner-up finish in the Oaklawn Mile S. Apr. 11, then broke through with a powerful performance in the GI Hollywood Gold Cup S. June 6 prior to his equally impressive win at the Spa.

City Zip died at age 19 three years ago, but he remains a top sire with 88 black-type winners covering all surfaces and multiple distances. His 33 graded winners have contributed mightily to his tally of over $105 million in progeny earnings, and Improbable is one of his sire's 11 millionaires. City Zip is a half-brother to 2004 Horse of the Year Ghostzapper, whose sire, Awesome Again, is the namesake of this latest Improbable win. Improbable's dam, the A.P. Indy mare Rare Event, is out of a half-sister to GISW and leading sire Hard Spun (Danzig). Rare Event's most recent produce is a yearling colt by Cross Traffic. She was bred to Curlin for 2021. Improbable is the most successful of three stakes winners by City Zip out of A.P. Indy mares, with the others being MSW Lipstick City and SW Marshall Eddy, both on the turf.