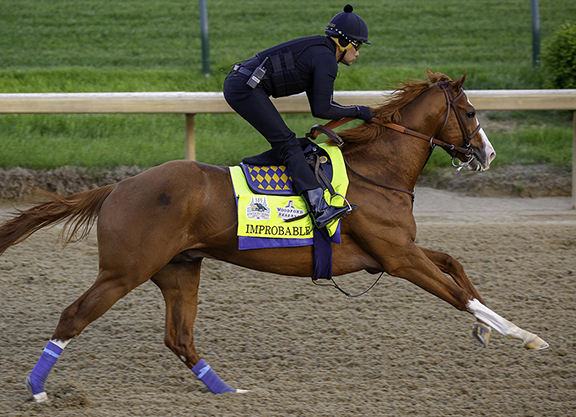 ‘TDN Rising Star‘ Improbable (City Zip), promoted from fifth to fourth in the GI Kentucky Derby, drew post four and was installed the morning-line favorite at 5-2 among the 13 sophomores signed on for Saturday’s GI Preakness S. at Pimlico. The Bob Baffert trainee, who romped in the GI Los Alamitos Futurity S. late last year before settling for second in both a division of the GII Rebel S. and the GI Arkansas Derby this term, will be ridden for the first time by Mike Smith.

Gary Barber’s War of Will (War Front), among those most impacted by Maximum Security (New Year’s Day) shifting out at the top of the lane in the Derby, will break from the rail, just as he did two weeks ago. Given a 4-1 morning-line quote, he will again be ridden by regular pilot Tyler Gaffalione. The Derby seventh-place finisher annexed the GIII Lecomte S. and GII Louisiana Derby earlier this term.

Alwaysmining (Stay Thirsty), drawn in the six slot and 8-1 on the morning line, is one of the more intriguing fresh faces in the Preakness. The Maryland-bred and Fair Hill-based gelding has won each of his last six starts, most recently Laurel’s Federico Tesio S. by 11 1/2 lengths Apr. 29.

Calumet Farm’s Everfast (Take Charge Indy) was the latest addition to the Preakness field, with the news coming out earlier in the day Wednesday that he’d head to Baltimore from trainer Dale Romans’s Churchill Downs base.

Second at 128-1 in Gulfstream’s GII Fasig-Tipton Holy Bull S. in February, the bay has been off the board in three subsequent tries, most recently checking in fifth in the GIII Pat Day Mile S. on the Derby undercard. He’ll be ridden for the first time Saturday by Joel Rosario.

“He jumped up and ran big in the Holy Bull,” Romans said. “When he runs big, he runs big. We’re hoping he throws in one of those big races. Some of the top contenders are missing, so we’ll take a chance. He’s training like he did before the Holy Bull. We’re going to try to wheel him back off the [one-turn mile] and see if we can get a piece of it. You’ve got a future Hall of Fame rider, so we might as well take a shot.”

Romans took the 2011 Preakness with Shackleford (Forestry), while Calumet has the most wins of any owner with seven.

The complete Preakness field is as follows: