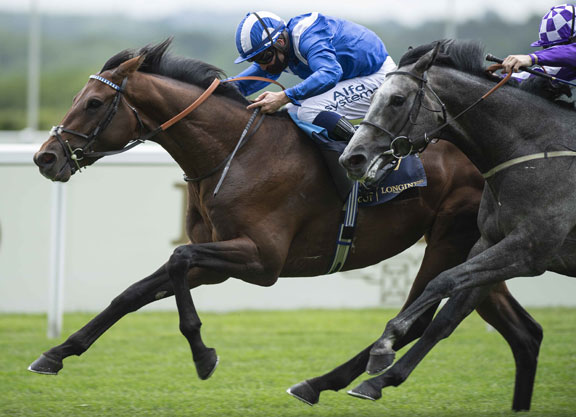 “He's fine, and we're hoping to go to the Leger,” said Racing Manager Angus Gold. “He's progressing very well, I was impressed with him at Newbury the other day. It's an extra furlong, but I don't see that being a problem. We'll see whether he's up to that sort of company when he does go up in trip.”

“It will be Middle Park certainly, all being well,” said Gold. “It [the Gimcrack] was a step up from his maiden at Salisbury, and being slow into his stride, he won really quite nicely in the end. He's always worked like a nice horse–they've always thought he was decent. He's done everything right, and he's got a fantastic attitude. It will be very interesting to see where we are with him.”

The Jean-Claude Rouget-trained Raabihah (Sea The Stars {Ire}), meanwhile, remains on course for the G1 Prix Vermeille next weekend as a warm-up for the G1 Prix de l'Arc de Triomphe.

“On to the Vermeille first of all, and then we hope–if all goes well–on to the Arc,” Gold said. “It's one step at a time, but that's the plan, if she's in good form and if she comes through the Vermeille well.”