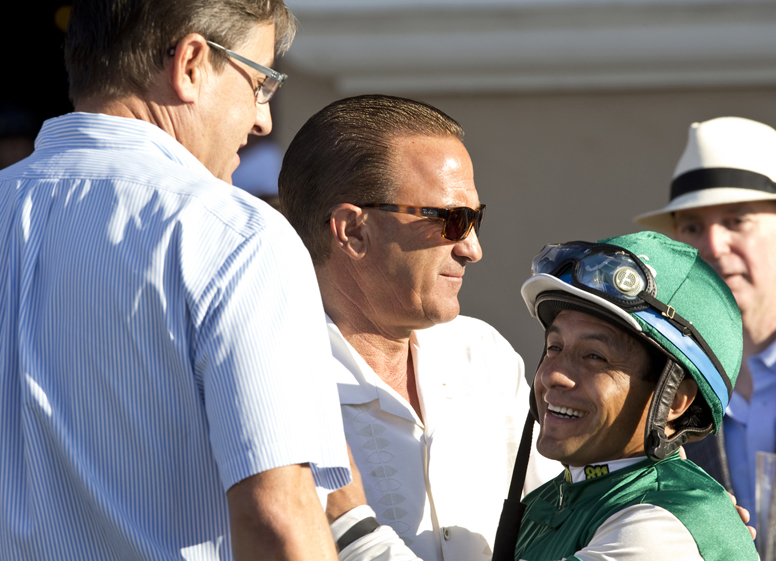 While enjoying a day at the races in their weekend box at Santa Anita back in 2010, Kosta Hronis turned to his younger brother Pete and told him that he wanted to buy a racehorse.

Probably not the response that he was looking for, but Kosta Hronis meant business.

Enter John Sadler. After being introduced to the perennial leading trainer by their long-time usher the following weekend at the Great Race Place, Hronis Racing was quickly on its way.

“We had one horse, then we had two…three,” Kosta Hronis commented. “When we ended up with five, I said, 'Oh my god, I've got five horses. This is crazy!' And it just kind of snowballed from there. Now, we've won the California horse owner award for three years straight, and for what we've accomplished in such a short amount of time is a tribute to John Sadler and the people that he's surrounded us with.”

Within just two years of launching, Hronis's green-and-white silks were carried to a pair of Grade I victories by Lady of Shamrock (Scat Daddy) in the American Oaks and Del Mar Oaks. She later brought $2 million at the 2013 Keeneland November Sale. Vagabond Shoes (Ire) (Beat Hollow {GB}) and Sweet Swap (Candy Ride {Arg}) followed suit with graded stakes victories of their own. Iotapa (Afleet Alex), claimed by Hronis and Sadler for $50,000 out of a successful debut, won twice at the highest level before switching hands for $2.8 million at last year's Keeneland November Sale.

The momentum has carried into 2015, too. After a pair of in-the-money finishes at the 2014 Breeders' Cup courtesy of Iotapa's close third in the Distaff and Daddy D T (Scat Daddy)'s rallying third at 17-1 in the Juvenile Turf, the Hronis family heads to Lexington with a trio of runners–Hard Aces (Hard Spun) (Classic), Stellar Wind (Curlin) (Distaff) and Elektrum (Ire) (High Chaparral {Ire}) (F/M Turf)–entered for this weekend's World Championships.

“To place in a pair of Breeders' Cup races last year, that was really great,” Hronis said. “We're pretty new at this. This is only our fifth year, so we're really spoiled to even be competing in the Breeders' Cup. I really want to be part of John Sadler and his team winning their first one.”

He continued, “As a fan of the sport, I always loved to watch the Breeders' Cup. To me, it has always been the Super Bowl because you get to see the world's greatest in all of these different types of races.”

Hronis Inc., a family-run business based in California's San Joaquin Valley, has been raising table grapes since 1945. Kosta and Pete, along with the former's son Demetri, head the operation.

“We grow table grapes and citrus,” Kosta Hronis said. “The grapes are all table grapes, so no wine. When you go to the market and see grapes on the store shelf, they're probably from us or one of our neighbors. We're full-time farmers.”

So how exactly did horse racing enter the equation? “My mom was born and raised in Pasadena,” Hronis explained. “We'd visit our grandparents, who lived about two hours away, and our family outing was to go to the racetrack. We'd pick a horse and get to bet $1 a race. My brother and I just fell in love with it when we were kids.”

Hronis, now 56, has passed on that passion for racing to his wife Stephanie and their three adult children. “Brother Pete doesn't frequent the track that often, but he supports me and covers for me when I'm gone from work,” he said with a laugh. “I've got three kids [aged 32, 29, 23] and my wife comes to all the races. Without her support, this would be impossible. She loves it and really enjoys going to the barns in the morning, too. I'm very lucky. Before this, all I did was work. My kids are thrilled that I have something away from the ranch. It's actually made me younger.”

All three of Hronis Racing's Breeders' Cup horses were acquired via private purchase.

Stellar Wind, an eye-catching 8 3/4-length maiden winner for owner Barbara Houck and trainer Donald Barr at Laurel last December (video), has done very little wrong since joining the Sadler barn. The chestnut has won four of five starts under her current management, including a career high in the GI Santa Anita Oaks Apr. 4 (video). Her lone blemish? A troubled fourth as the 3-1 favorite after racing far back early in the GI Kentucky Oaks May 1.

“She really hasn't disappointed since we bought her,” Hronis said of the Virginia-bred. “She's been a brilliant little filly and she's done a great job.”

Stellar Wind–a $40,000 FTSAUG (catalogue page) and $86,000 EASSEP graduate–faces her elders for the first time in the Distaff following wins in the GII Summertime Oaks at Santa Anita June 20 and GIII Torrey Pine S. at Del Mar Aug. 30 (video), respectively. She was produced by a half-sister to the dam of GISW Great Hunter (Aptitude).

“We certainly appreciate Beholder not being in the race,” Hronis said with a chuckle.

Hard Aces punched his ticket to the Classic with a 7-1 upset in the 'Win and You're In' GI Gold Cup at Santa Anita S. June 27 (video). He has since disappointed, however, with a pair of sixth-place finishes in the GI Pacific Classic Aug. 22 and GI Awesome Again S. Sept. 26. Hard Aces concluded his campaign for trainer Larry Jones and owner/breeder Dreamchaser Throbreds with a win in the Louisiana H. at Fair Grounds in January (video).

“We're hoping he goes back to form,” Hronis admitted. “We got the 'Win and You're In.' We've got the ticket, so we're going to take advantage of it and run him. If we get in the gate, we've got a shot.”

Elektrum, heroine of the GII John C. Mabee S. at Del Mar Aug. 8 (video), has endured her share of bad racing luck since relocating to these shores. The bay, previously campaigned in Europe by Giuseppe Botti on behalf of Scuderia Magenta, prepped for the Filly & Mare Turf by completing the exacta in the GI Rodeo Drive S. at Santa Anita Sept. 26 (video). She was stakes-placed in France for her former connections in 2014. Currently stuck on the F/M Turf also-eligible list, Elektrum will need a scratch to draw into the body of the field.

“If you look at the far right column of her pp's–wide, blocked, etc.–she's had some real trip issues,” Hronis acknowledged. “Talented filly–I think if things go right and she finds a place to run, she's really dangerous.”

What led to the three private acquisitions?

“With Hard Aces, we were probably looking for an older handicap horse for the West Coast for about a year,” he replied. “Stellar Wind looked so good in her maiden win and she was by Curlin. Elektrum looked like she'd be a good replacement for Lady of Shamrock.”

The ill-fated Talco (Fr) (Pivotal {GB}) earned his way into the GI Breeders' Cup Mile via a smart win in the GI Shoemaker Mile S. at Santa Anita in June, but unfortunately succumbed due to complications from a recent arthroscopic surgery.

Hronis Racing currently campaigns around 40 horses on the West Coast with Sadler. The outfit's first winner Caitie's Secret (Benchmark) remains the lone broodmare at this stage. The California-bred is boarded at Legacy Ranch in the Golden State.

“We're really diversified,” Hronis said. “We claim, buy at the yearling and 2-year-old sales, purchase privately, and we've also been involved with the Arc Sale across the pond, too. So, we're always evolving as a barn and always looking. We keep our eyes open.”

Hronis concluded, “I can't afford to buy the Los Angeles Lakers, so this was my way of owning a fancy sports franchise.”

The post season for Hronis's team begins in the Bluegrass Friday afternoon.