How Dubawi Has Helped Ease The Blues 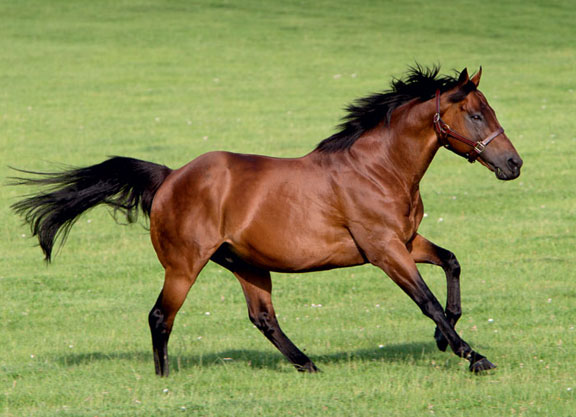 Almost two decades ago, on a June day that still sparkles in the memory while others have faded into dim recesses of the mind, a horse named with considerable portent by his owner and breeder Sheikh Mohammed held Royal Ascot in his thrall.

Just as he had done in the Dubai World Cup that March, Dubai Millennium (Seeking The Gold) rendered pursuit almost pointless when stringing along his five rivals in the Prince of Wales's S. to have them finish at an eight-length remove or more.

Up high in the old stand that day, those at Ascot with the serious business of racing on their minds began their applause while the colt was still only halfway along the straight, so unquestionable was his impending victory. What we didn't realise then was that it was the last time we would see Dubai Millennium in his majestic pomp. As Jerry Bailey tipped his hat to the injured Frankie Dettori and flew to the ground in an extravagant dismount, with him landed dreams of further glory. For on the day that Dettori returned to action after the plane crash that so nearly claimed his life, Dubai Millennium suffered his own reversal with a hind leg fracture sustained at morning exercise in early August. What would have seemed a devastating blow then was a mere forerunner to a far greater tragedy that was to befall the horse. On April 29 the following year, his life was ended desperately prematurely by grass sickness, midway through his first season at Dalham Hall Stud.

Less than a year after his demise, his truncated first crop appeared, with many of the resulting 56 foals being bought privately by the sheikh in a bid to find his champion's heir. The ninth to be born was already in his ownership, having been foaled at Kildangan Stud to the Oaks d'Italia winner Zomaradah (GB) (Deploy {GB}) on February 7, 2002. In a beautifully produced book commemorating Dubai Millennium and depicting all of his offspring, the strong bay colt who would come to be known as Dubawi (Ire) is the final foal to feature. It wasn't the last time he would be prominent on the back pages.

By a wide margin, Dubawi was his sire's best runner, winning the G1 National S. during an unbeaten juvenile campaign. He became a Classic winner in the Irish 2000 Guineas and then emulated his father with victory in the G1 Prix Jacques le Marois after a valiant effort over a trip just beyond reach when third in the Derby.

In 2006, he again followed in his father's footsteps, this time to stand at Dalham Hall Stud, though at a fee a quarter of the size of that commanded by Dubai Millennium. Though robust and obviously talented, the compact Dubawi did not share his sire's film star swagger and, for a stallion who now stands for £250,000— ten times greater than his opening price—it seems scarcely believable that he was once on offer at just £15,000 in that 'difficult' fourth season.

In the age of Galileo (Ire), it's all too easy to overlook the achievements of Dubawi. The significance of his stud career will not be lost on Sheikh Mohammed's operation, however, especially since Dubawi notched a key milestone last Friday at Epsom when the Charlie Appleby-trained Space Blues (GB) posted the 100th stakes victory for his sire in the royal blue of Godolphin.

That the 'home team' accounts for so many of Dubawi's169 individual stakes winners, and indeed 12 of his 39 Group 1 winners, should come as no surprise. After all, the Godolphin mares not only have first call on his book, but Sheikh Mohammed and his sales team routinely snap up many of his elite offerings at public auction. Nevertheless, from Sand Vixen (GB)'s first strike in the listed St Hugh's S. on Aug. 14, 2009, which was followed a month later by the G2 Champagne S. victory for another first-crop member, Poet's Voice (GB), the stream of black-type winners from this fertile source has greatly boosted Godolphin's racecourse success over the last decade.

Those two early winners would go on to make their mark at stud. Sand Vixen, later winner of the G2 Flying Childers S., is the dam of G1 Jebel Hatta winner Dream Castle (GB) (Frankel {GB}), while Poet's Voice went on to claim Group 1 success himself in the Queen Elizabeth II S. before carving out a respectable stud career which was cut short by a fatal heart attack at the age of just 11.

Darley currently stands two of Dubawi's sons at Dalham Hall Stud in Night Of Thunder (Ire) and Postponed (Ire), while Frontiersman (GB) is at Overbury Stud and Hunter's Light (Ire) at Haras du Logis. He is also represented at the Aga Khan Studs' Haras de Bonneval by Zarak (Fr) and by two Juddmonte-bred sons, Time Test (GB) at the National Stud and New Bay (GB) at Ballylinch Stud. Meanwhile, Makfi (GB), the first of Dubawi's two 2000 Guineas winners, is at stud in Japan after standing in England—during which time he sired the Poule d'Essai des Poulains winner Make Believe (GB)—and then France.

These are early days when it comes to assessing whether any of these young stallions can go on to add another postscript to the Dubai Millennium story. It is, however, fair to say that Seeking The Gold, who lived to the age of 31 at Claiborne Farm but had scant representation in Europe, now has a worthy line in existence in this part of the world even if his most celebrated son to race here was granted so little time at stud.

The story is far from being fully written. This year alone, Dubawi has been represented by a chart-topping 20 black-type winners, with 14 of those being group or graded winners. In the past week those figures were boosted by victory in the G2 Badener Meile for The Revenant (GB), a GIII win at Belmont Park for the Newsells Park Stud-bred Demarchelier (GB), and a second Epsom stakes success, following that of Space Blues, for Anna Nerium (GB) in the G3 Princess Elizabeth S.

As that snapshot shows, Dubawi's success is far-reaching, but it is enjoyed most strongly closest to home.