Home » Archive » Shared News » Hopeful Could Be Next For Defend

Hopeful Could Be Next For Defend 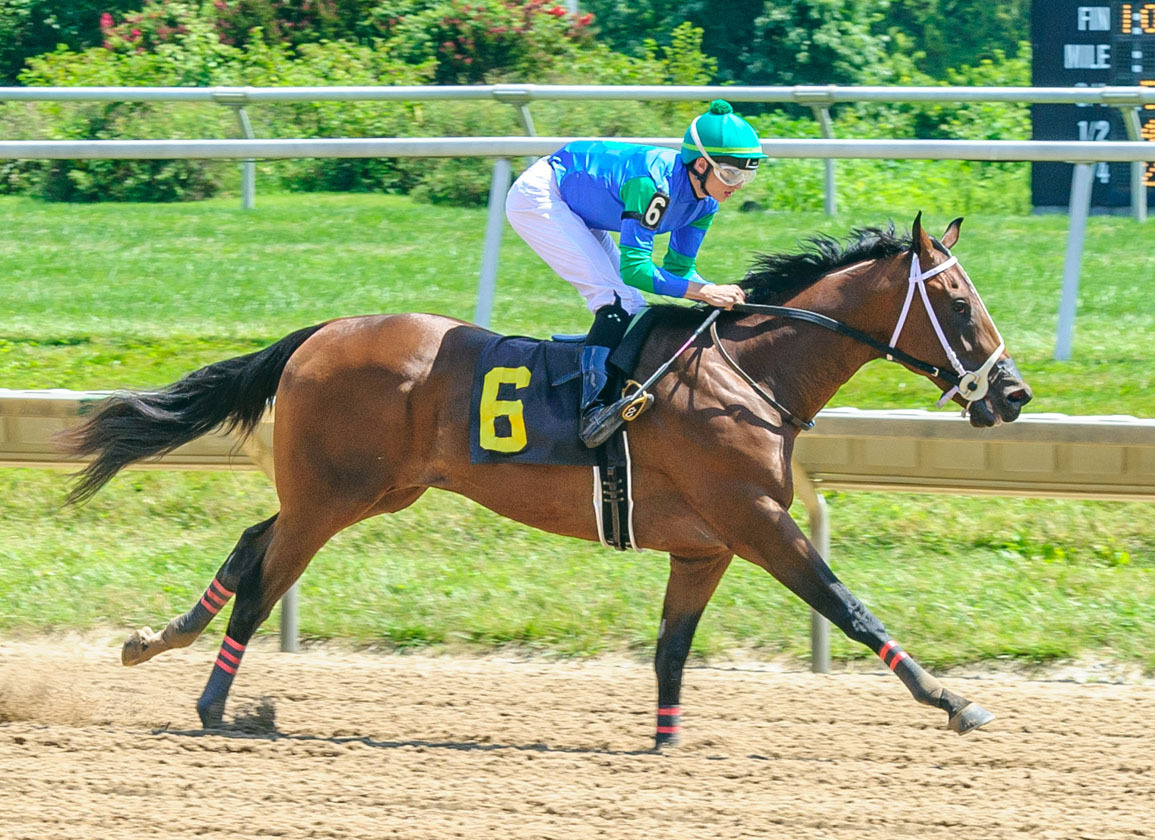 The connections of Defend (American Freedom), a romping winner in his Aug. 5 debut at Delaware Park, have yet to pick out his next race, but they aren't afraid to tackle a tough spot, including the GI Hopeful S. It's clear to see why.

“His race was phenomenal. It looked like he was on cruise control,” Susan Montanye said of his debut. Montanye bought the colt as a yearling and still owns a small percentage in partnership with Nick Sanna.

Montanye was among the first to discover his potential talent. She bought the colt in October of his yearling year, paying just $16,000 for him at OBS. She then entered him into this year's Fasig-Tipton Mid-Atlantic 2-year-old sale, where he RNA'd at $72,000. Shortly after the sale, she sold a majority interest in the horse to Sanna, who sent the horse to trainer Cal Lynch.

Early on, Lynch also saw that there was some talent there.

“My son, Anthony, had him at Fair Hill and he was very keen on him,” Lynch said. “We worked him on the Tapeta there and he worked really well over it. I brought him to Delaware and worked him out of the gate and he worked really well. We loved the way he went and thought he did everything right. He was very professional. For a young horse, he had a great mind and that's what sets him apart. I never breezed him super fast. He does everything easily.”

Sent off at 4-1 in his debut, Defend went right to the lead and soon sprinted clear of his seven rivals. Under wraps through most of the stretch run, he won by eight lengths and covered the 5 1/2 furlongs run over a fast track in 1:04.27. The race was split and the other half went in 1:06.68. Defend earned a 75 Beyer figure.

Lynch is optimistic that Defend will be even better in his next start.

“We were optimistic that he would run a good race,” he said. “He had trained really well. So we thought he'd run well. But I don't think I've ever taken a 2-year-old over there for their first start and thought they were really ready or cranked. He surprised us a little bit, but we knew he was talented.”

Defend's win was just the latest for the Airdrie stallion, American Freedom, who has gotten off to a fast start with his first crop. He's had nine 2-year-old winners so far, including American Bound, a filly who won a maiden special weight race at the Keeneland spring meet. The list also includes American Sanctuary, who, after breaking his maiden at Prairie Meadows, came back to finish second in the Prairie Gold Juvenile S., also at Prairie Meadows.

With his horse having a promising pedigree and coming off an impressive win, it's no surprise that Sanna's phone has been ringing from prospective buyers. Lynch said that, for now, his owner prefers to enjoy what he has.

“We are getting calls,” Lynch said. “Nick Sanna is a good sport and he really likes him. He wants to take a ride and see where it leads. He's had some good horses over the years but nothing like this.”

In the meantime, Sanna and Lynch will try to figure out what's best for their horse. It looks like he can handle a race like the Sept. 6 Hopeful, but that would mean taking on divisional leader Wit (Practical Joke). After breaking his maiden by six lengths, Wit won the GIII Sanford S. by eight lengths.

“The Hopeful is a logical spot, but we're just going to see how he trains,” Lynch said. “He worked good Saturday. After another couple of works we will decide. We always let the horse dictate things. The Hopeful is a spot we'd like to go in. There are a bunch of other2-year-old dates for him. I'm not sure we want to go up there and take on Wit. But it's a definite possibility.”