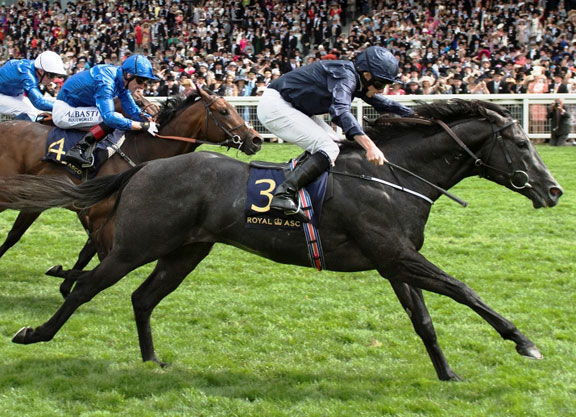 While most American breeders are just now getting their first look at multiple Group 1 winner Caravaggio, who stood his first three years at Coolmore's headquarters in Ireland and now takes on the U.S. market for 2021, the son of Scat Daddy is not new to Ashford Stud.

The speedy grey was born and raised at Ashford, having been bred by the farm's Director of Sales Charlie O'Connor and his in-laws' Windmill Manor Farms.

“Caravaggio is a horse that's obviously very close to our hearts,” Coolmore's Adrian Wallace said. “He was born here and spent all of his young life here. The barn where he was raised is in front of our office. So when he went to Ballydoyle, we followed him very closely.”

The team back home heard positive reports from Aidan O'Brien from the beginning, and those proved true when Caravaggio won on debut and then followed up with three more victories, including the G2 Coventry S. at Royal Ascot and a four-length victory in the G1 Keeneland Phoenix S., for an undefeated juvenile season.

“He had speed to burn,” Wallace said when asked of Caravaggio's greatest quality. “As someone said, speed is dangerous. The way he broke, the way he traveled through his races and then finished off those races showed that he was a sprinter to be reckoned with.”

Coming back at three, Caravaggio won the G3 Lacken S. before heading back to Ascot to claim the G1 Commonwealth Cup in a battle against Godolphin's Harry Angel (Ire) (Dark Angel {Ire}) and Blue Point (Ire) (Shamardal).

“Royal Ascot, for anyone now but especially for Europeans, is the pinnacle and height of the middle of the European racing season,” Wallace noted. “To win the Coventry S. over six furlongs is a race that's high in prestige but then to come back as a 3-year-old and do it again in the Commonwealth Cup against some very good sprinters marked Caravaggio as one of the best of his generation. When you can do it on the main stage at Royal Ascot, that's what it's all about.”

Later in the season, the swift sprinter added the G2 Flying Five S. to his list of victories before retiring later that year.

His first crop of yearlings hit the market this year and several made it to the Keeneland September Sale.

“The interesting thing is that three of his horses [from the September yearling sales] are going to go into training with Wesley Ward,” Wallace said. “So hopefully come April and May of next year, we should see some early runners from Caravaggio in this country.”

Caravaggio later made headlines at Tattersalls October Book 2, where his 105,417gns average was the highest of any first-crop sire over the three-day sale. Demi O'Byrne, agent for Peter Brant's White Birch Farm, went to 205,000gns for a yearling colt out of the winning Galileo (Ire) mare Longing (Ire) and then came back to pay 170,000gns for another Caravaggio colt out of Solar Event (GB) (Galileo) {Ire}).

“The sales in both Ireland and England continued in somewhat of a depressed market this year, but Caravaggio's progeny continued to sell well,” Wallace said. “They averaged just over $155,000. They're training with the right people and look like they should be early.”

Ashford is now looking to build upon the foundation Caravaggio has already started for himself overseas. The son of Scat Daddy will stand for $25,000 in 2021.

“He's a horse that we've wanted here for three years, and finally on the fourth year we got him,” Wallace said. “He's been very popular so far. I think that the demand for sons of Scat Daddy worldwide is only going to get greater. He was a horse that, in a very short time, was able to achieve so much. I think people need to, and already are, taking note with these young sons of Scat Daddy. There's something in the water. These horses are too good.”

He continued on Scat Daddy's international success, “One of the things that made Scat Daddy such a dominant sire was his ability to get runners on the biggest stages. These horses have run, with the likes of Justify, Ten Sovereigns (Ire), No Nay Never or Con Te Partiro in Australia. They run and win on the biggest stages and hopefully that's going to continue with these young sons of Scat Daddy.”

Wallace said that Caravaggio's conformation fits the look of his sire.

“Physically, he brings a lot of what was Scat Daddy,” he said. “He's got a lot of quality, but he's also got a massive forearm and gaskin. He's very broad across his chest. He moves like a panther and that translated to excessive speed on the track. He's very balanced and he's got that strength that we think will suit American mares.”

Wallace added that Caravaggio's pedigree should also appeal to the American breeder.

“We think he'll be a good influence on both dirt and turf,” Wallace said. “He's out of the stakes-winning Holy Bull mare Mekko Hokte, whose first foal My Jen (Fusaichi Pegasus) was a Grade II winner on the dirt. So we think that given his physique and his pedigree, he'll be a horse that'll achieve on both surfaces.”