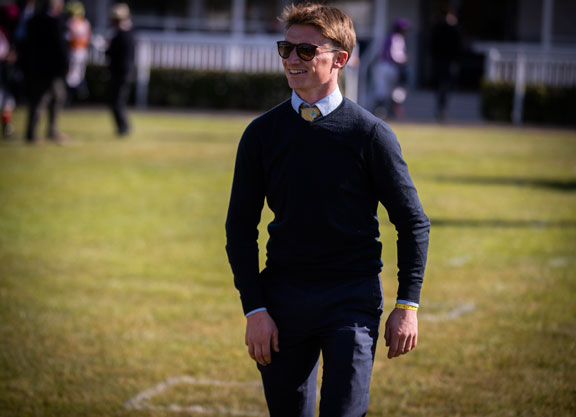 The 2020 season had all the ingredients to be a potentially ground-breaking one for trainer Denis Hogan before a COVID spanner was thrown in the works in the spring. With a semblance of normality back in day-to-day lives, Hogan’s season is now starting to deliver what it originally promised it might with the trainer basking in the glow of having the two highest- rated sprinters in Ireland under his care at his Tipperary stables.

“It’s going brilliantly at the moment and we have a fantastic bunch of horses but it was a different story here a few months ago,” Hogan said. “We dropped to half the number of horses, we had to lay off staff and no one knew if we would get back racing again, it was very much doom and gloom. But as soon as racing started we were lucky that the horses were fit and well and we got back among the winners very quickly.”

Thirteen flat winners since racing resumed in June are testament to the form and quality of Hogan’s string and while he views himself very much as a dual purpose trainer it is his exploits on the flat, the past two years in particular, that have helped showcase his wide range of training talents. Hogan established himself in the top 10 flat trainers in Ireland last year by winners with a score of 33 and he looks on target to reach a similar level this year. However, it is the possibility of a first Group 1 success that has the 33-year-old chomping at the bit.

While most would agree it is recent G1 Darley July Cup runner-up Sceptical (GB) (Exceed And Excel {Aus}) that could garner top-level honours for his trainer this season it wouldn’t be a huge surprise if stablemate Make A Challenge (Ire) (Invincible Spirit {Ire}) were to beat him to it.

Make A Challenge, owned by a syndicate that includes Hogan’s parents, will get the chance to add a first group race to his CV when the Godolphin cast-off lines up in the G2 Holden Plant Rentals Sapphire S. at The Curragh on Sunday.

“We’ve actually supplemented Make A Challenge for this weekend as it wasn’t in our original plan but he is the highest- rated horse in the race and it looks a good opportunity,” Hogan said. “The English horse A’Ali (Ire) (Society Rock {Ire}) has also been supplemented and there is Speak In Colours (GB) (Excelebration {Ire}) and a few others in there too but I think taking Joseph’s horse [Speak In Colours] on over five is probably better for us.”

A drop back to five furlongs is also on the cards for Sceptical’s next start in the G1 Coolmore Nunthorpe S. at York next month.

“The Nunthorpe is four weeks away and the timing is perfect,” Hogan said. “I’m happy enough to be dropping back to five. He has so much natural speed and I’m hopeful it will be a nice straightforward race. We haven’t discussed the jockey situation yet; I know James [McAuley] would be happy to let Joey Sheridan ride but I guess if Frankie [Dettori] is available again it would be hard to say no to him.”

While Hogan said Make A Challenge took him by surprise with the sustained improvement he has made in the last 12 months, with Sceptical he said it was evident from early on that he was dealing with something out of the ordinary.

“I kind of didn’t believe it when I first saw Sceptical work, I thought he might be a flash in the pan or a morning wonder, but he just did things so easily,” Hogan recalled. “But then we sent him to Dundalk for his first run last October and despite missing the break and not being fully wound up he managed to finish a close third and I knew then that he was very good. We got his wind sorted out after that as it was an issue back then and ever since he has been fantastic. He also has a brilliant temperament and is so laid back which makes training him even easier.”

The intriguing prospect of Sceptical and Make A Challenge going head-to-head on a racecourse for the first time remains a possibility given both are entered in the G1 Derrinstown Stud Flying Five S. at The Curragh on Sept. 13. While Hogan said his first inclination is to try to keep the pair apart he has not ruled out a clash of his stable stars towards the end of the season.

Handling two world-class horses has given Hogan some valuable exposure on the global stage and he is keen to capitalise on the good publicity. He admits he has been fielding more phone calls recently from prospective owners and is excited also to be training the promising 2-year-old filly Grammata (Ire) (Twilight Son {GB}) for her co-breeder Lady O’Reilly.

“Grammata is still a maiden but she has done very little wrong and picked up some black-type at Cork last week,” he said. “She is a nice filly and it’s great to have Lady O’Reilly as an owner in the yard.”

Hogan’s success may be catching the attention of some powerful flat owners but he said he sees no reason why he can’t continue to expand a successful dual-purpose operation.

“We are young and eager and we can mix both flat and jumps and I guess it was originally because of my jumping background that we set out a few years ago trying to buy horses off the flat that could go on and jump a hurdle as well,” he said. “We hit on one or two that ended up not having the stamina for jumping trips and when we reverted them to the flat we found they had improved. Tithonus (Ire) (Glory Of Dancer {GB}) was probably the best example a few years ago. We actually ran him over hurdles and he was placed a few times but when he reverted to sprinting he was a revelation winning a Rockingham and a Scurry S. at The Curragh. However, we also had a jumps winner at Killarney the other day and I have no intention of turning my back on that sector.”

Tithonus sparked a change in strategy at Boherna Stables and Hogan and his buying team began actively sourcing sprinters. The team included owner James McAuley who purchased 2009 G2 Queen Mary winner Jealous Again (Trippi)’s son Sceptical for £2,800 un-raced from the Godolphin draft at Goffs UK just under a year ago. While he may have been more familiar with training National Hunt horses at the time Hogan has proved equally adept at conditioning horses for a completely different discipline, putting his prior experience from a previous life to good use.

“I would have learned a good bit about sprinters when I was with Mick Halford many years ago,” he explains. “In fact at that time Mick had quite a few jumpers as well and he would regularly keep the flat and jump horses in the same routine, except for fast work. A lot of the basics are the same, just getting them fit and keeping them healthy and happy.”

Another niche that Hogan is keen to increase his involvement in is the 2-year-olds.

“It’s a sector that we haven’t been able to break into so far but I think it’s important that we try and increase our presence in that area for next year,” he said. “I’ve noticed that if you don’t have them as 2-year-olds it’s very hard to have anything for the 3-year-old handicaps the following year, so we are missing out on being able to compete in those races. So we will definitely be focusing on sourcing more yearlings and 2-year-olds at the back end of the year.”

Ireland has no shortage of trainers who have built up a thriving enterprise from scratch and Hogan is certainly one who fits into that category. “We started with five stables 10 years ago and we expanded a bit every year to the point that we now have everything we need here. But saying that you can never rest on your laurels; there is always something that can be improved or developed so it’s constantly a work in progress. It’s a huge commitment and a big expense as well and if the business wasn’t going as well it would be hard to justify it. It’s also a team effort and I’m lucky in that I have great staff and owners so I’m very grateful in that respect.

“I’m also lucky to have landed on two very good young jockeys in Joey Sheridan and Joe Doyle. From the first morning I saw Joey riding out here I thought he was just a natural rider, great hands and a lovely seat and he’s really maturing into a fine rider. Joe Doyle, despite still being very young, has loads of experience. He’s ridden in England and America and is a proper professional.”

One would imagine that being in the position he is in that Hogan would have enough to focus his thoughts and energy on without the demands of also being a jump jockey himself and despite recently scaling back his riding activities and limiting them to his own runners he has yet to fully hang up his boots.

“I have less and less time for riding at the moment to be honest and plenty of people tell me I should call it a day and concentrate on training and they’re probably right. Riding used to be very important to me but it’s less so now so I guess you could say I’m slowly letting go of it. I still try to ride two lots at home in the morning on certain days. Other days I have to stay on the ground to watch other horses. I tend to ride on the routine days, whereas on work mornings I would be on the ground. I find being able to sit up on one can give you a different perspective so I’d like to continue that. I rode Sceptical a few times early on, even just cantering I could feel he was a bit special. However Joey Sheridan rides him every day now so I will leave that partnership as it is, it seems to be working just fine.”