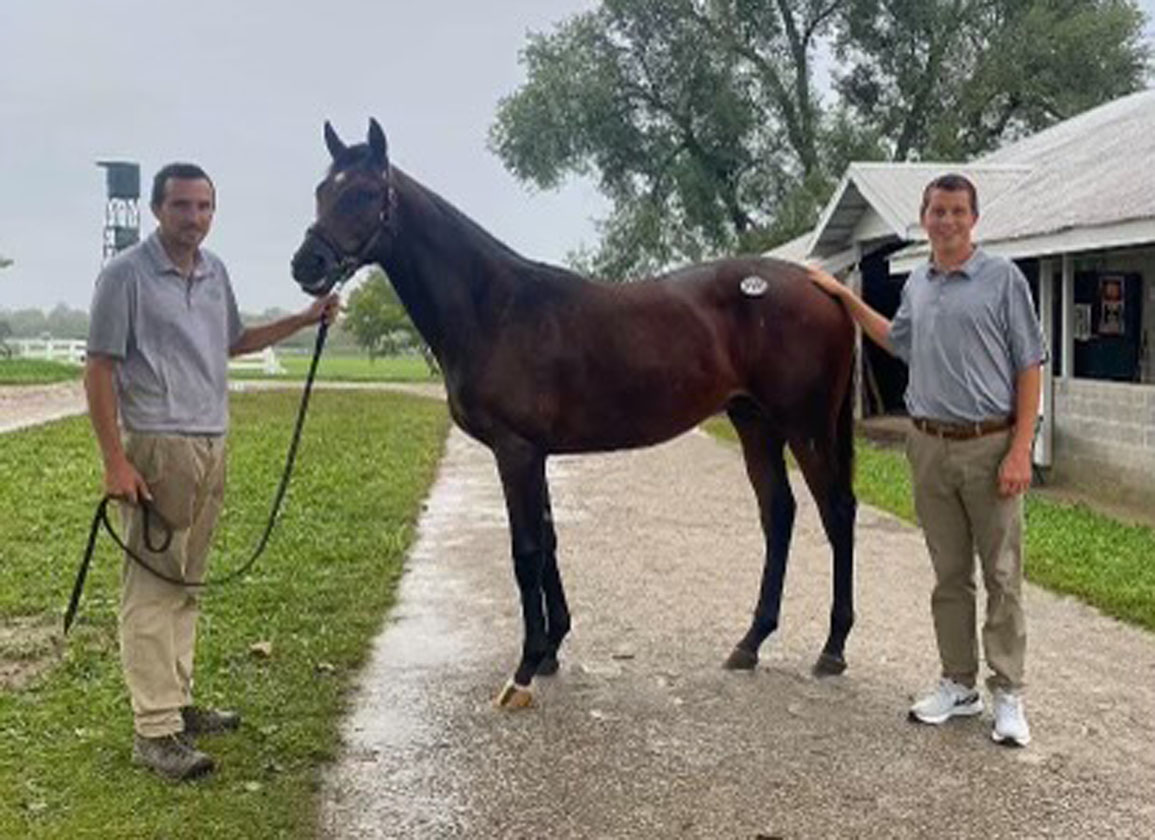 Shane and Josh Hennessy grew up in an Ohio family whose only connection to horse racing was a yearly tradition of watching the Kentucky Derby on television, but the two brothers are more than making up for lost time. Both now serve as managers at Kentucky farms which enjoyed strong results at the recently concluded Keeneland September Yearling Sale. Josh is in his third year at the Knelman family's Farfellow Farms, while Shane joined forces with Robbie and Susie Lyons's Hartwell Farm last December.

“I came down to University of Kentucky and started working at Chesapeake Farm part-time and just kind of fell in love with it,” Josh Hennessy said of his first involvement in the industry. “I switched my major to equine science and management and ever since then, it's been no turning back.”

Shane Hennessy followed in his brother's footsteps to the Bluegrass.

“I was in school and I needed a job to help pay the bills really,” Shane explained. “I started at Chesapeake Farm just as a farm hand. My brother was sort of doing the same thing and kind of linked me in.”

But it took him a little longer to decide the industry would be his future.

“I was happy doing the job, but it took me a while to get the wheels spinning and connect things and see how it played out–to see the horses grow up and get to that age where they run,” he continued. “I ended up working full time there for two to three years and then I switched my major over to equine management.”

“Tom really played a huge part in our involvement in the industry,” Shane, who spent three years working with Evans, said.

Following his stint at Trackside, Shane spent time at Stonestreet before settling in at Calumet Farm.

The 27-year-old decided to make the move to Hartwell Farm last winter.

“I was just sort of looking to do more,” he said of the transition. “I had been the assistant broodmare manager at Calumet for the last two years and before that I was in the stallion division over there. So they kind of made a spot for me to move up. But I wanted to be in every aspect of it, more than just the broodmares. Over there, we would just foal them, then wean them and then that was it. I really like to be a part of the sales prep process–from the day they are born to the day they move on to their next career. That's sort of what I was looking to do.”

That all-inclusive attitude was exactly what the Lyonses were looking for for their farm.

“Our hope with having Shane come on board is to be able to bring in a few more clients that want to board and sell with us and race as well,” Robbie Lyons said. “We are fairly skinny on mares going into the season this year. We truly love what we do and enjoy the actual work, and having Shane be a part of it has added not only value to our business, but has made it a lot more fun for us.”

Lyons continued, “In hiring Shane as a working farm manager, he certainly had the experience to do the job having worked at Calumet, Stonestreet and Trackside under Tom Evans. What you don't see on a resume or in a recommendation is passion. And Shane has this in abundance.”

This year's September sale was Shane's first with Hartwell and the operation sold all 13 to go through the ring.

As his brother was working his way from Calumet to Hartwell, Josh Hennessy was putting in the time at the Cleary family's Clearsky Farm. He joined Farfellow Farms three years ago, a time he measures in foal crops.

“I started around the Derby, there was a group of yearlings and group of foals when I started, a crop of foals that made it to the yearling sales this year and a group of weanlings on the ground now. So, this was my third yearling sale with Farfellow,” he explained.

Farfellow Farms knocked it out of the park at Keeneland with a $1-million son of Street Sense and followed up with a $700,000 session-topping son of City of Light.

In addition to the success of their respective farms, the Hennessy brothers also enjoyed their own victory in the sales ring. They purchased a colt by Maclean's Music privately last year and sold him for $95,000 at the September sale (hip 2195).

“We've been doing it for probably the last five years or so, buying a horse and trying to improve him and move him on,” Shane said. “[Hip 2195] was a pretty good one for us.”

The colt's success in the sales ring may have had a lot to do with good word of mouth, according to Robbie Lyons.

“Everyday the staff at Hartwell had to listen to the virtues…success..and the plain 'awesomeness' of Maclean's Music. Any stallion manager ought to make sure the Hennessy  brothers buy one of their stallion's offspring, just for the PR alone.”

While working with family can sometimes be stressful, Josh said the brothers pinhooking ventures work because they come into them with similar mind sets.

Of the Maclean's Music colt, Josh said, “We knew the stallion had some good horses running and I think what we saw in him was a horse who just needed some time and some TLC and a little time to grow up. He just had an athletic frame to him and that's kind of what we like to look for, just an athletic-framed horse who is maybe a little immature, but one that we know we can try to improve on. At the end of the day, you're trying to improve the horses so you can have a successful pinhook.”

Looking ahead to the upcoming breeding stock sales, Josh said, “I think our goal this year is to try to buy three weanlings. We will see. I think the market is going to be really strong, so that's our goal at this point in time. We may be fighting and scrapping to get some bought, but if you look in the right places, you can always find a good deal.”

While the brothers have enjoyed success, Josh is quick to give credit to the many people who have helped them along the way.

“We bring a strong work ethic and passion for the horses to our jobs, but we've also had a lot of mentors along the way,” he said.

Also getting a mention is Brenda Stewart, the grandmother of Josh's wife Kelsey, who helped jump start the brothers' pinhooking operation.

“We were living on her farm and managing her horses,” Josh said of Stewart. “In exchange, she gave us the option to keep a horse there, so that's when we started trying to pinhook.”

As for future plans, Shane said, “I plan on pinhooking being my future. Hopefully.”

Josh added, “We would like to keep growing the pinhooking and we'd like to grow our business in the long-term. But short-term, I think we want to just keep on having our business on the side and putting in the work on the farms that we work for. And I think we are in really good spots. We've been really fortunate to be in the positions we are in. I think our goal right now is to keep working hard and hopefully be able to grow as the years go by.”