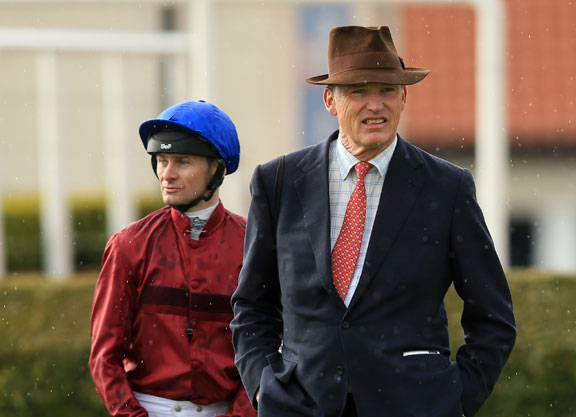 Jockey Rab Havlin has decided he will not appeal the decision by Lingfield stewards to suspend him 21 days for failing to take all reasonable and permissible measures to win a race on Apr. 21. Havlin was riding the John and Thady Gosden-trained Stowell (GB) (Zoffany {Ire}) when the 3-year-old made a late move on debut but just failed to catch his stablemate Polling Day (Ire) (Sea The Stars {Ire}), ridden by Frankie Dettori. Stowell was beaten a head under a hands and heels ride.

Gosden spoke out in support of Havlin, saying he always asks jockeys to avoid using the whip on newcomers.

Havlin said after riding Side Shot (GB) (Frankel {GB}) to win at Doncaster on Friday, “There were a few avenues we could go down. I spoke to Rory [Mac Neice, solicitor] and we discussed it, but I just didn't want it to drag on into next week. I wanted to draw a line under it and just move on. That's racing, my lad wasn't going much quicker in the straight and Frankie's was and was ridden out. I just thought it was the best thing to do [not appeal], put a line under it and walk on.

Gosden, speaking from Sandown, also addressed the news this week that his apprentice Benoit de la Sayette has had his license suspended after testing positive for cocaine, having previously denied using the.

“This is a problem in every town, village and city up and down the country,” said Gosden. “The teenagers have been in lockdown for a year, they are bored stiff and can't even go and play football with their friends in the park. They are looking for another stimulant. You don't have to be Einstein to see alcohol sales have gone through the roof, people are drinking more because they are bored looking at the walls. These kids are no different, to that extent they need all the support they can get, and a firm talking to.

“You could probably go into Esher now and find some cocaine in a beer garden. But remember it also suppresses appetite, if you are a jockey wasting. If you drink alcohol you've got sugar and carbohydrates that go with that so it's another way of having a good time. But it's illegal and it's got to be stamped out.”

“Urine samples are one thing, but hair samples are another. He was messing around with it at the beginning of the year and he's paid a mighty price. I see no harm in doing more testing, it's an obvious place to go.”