Home » Archive » Europe » Harlem Set To Be A Globetrotter

Harlem Set To Be A Globetrotter 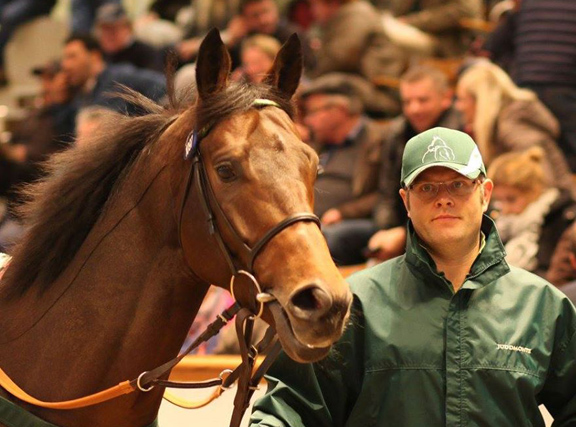 It’s not unusual for Tattersalls to bustle with activity during October but the crowd in both the auditorium and at the walking ring has risen to unprecedented levels this week at Park Paddocks. Eager buyers from all corners of the globe have descended on Newmarket in an attempt to take advantage of the weak pound – or make that pound and fivepence, with Tattersalls remaining the last bastion of the guinea in horse trading.

It took plenty of the cherished old currency to take home the sale’s top lot––520,000 to be exact––with Alastair Donald and Louis Le Metayer teaming up to buy Harlem (GB) (Champs Elysees {GB}) for their respective clients who plan to race him in Australia.

“He’s for a Hong Kong-based owner who also has [G1 Australian Cup winner] Spillway (GB) and is very keen to try to win the Sydney Cup, which is now worth A$2 million,” said Donald of lot 1097. “He’s been bought in partnership with Louis, whose client will take a share, and he’ll go to David Hayes.”

Le Metayer added, “He has great staying form and he’s a beautiful horse. He’s beaten Grey Lion (Ire) three times in France and that horse was recently second in the Geelong Cup, which is often a great pointer for the Melbourne Cup.”

Twice a winner for Andre Fabre, with his victories including the Listed Prix Frederic de Lagrange over a mile and a half, the scopey 4-year-old was also on the radar of the jumps brigade, and Donald was pushed all the way to the line by agent Tom Malone standing with Joe Tizzard, son of leading National Hunt trainer Colin Tizzard. Harlem not only topped the sale and became the highest price at this auction since 2010, but he was also the highlight of the sizeable Juddmonte draft, the traditional feature of the Wednesday evening session of the horses-in-training auction.

Extraordinary Trade
As dusk settled, the might of Prince Khalid Abdullah’s consignment pushed the 2016 aggregate past the tally of 20,344,500gns for the whole of last year’s sale with a day still to go. The 32 horses sold by Juddmonte put 2,257,500gns on the turnover with a draft average of 70,547gns.

Harlem may well find himself squaring up to another member of the same draft in Australia after Chris Waller’s agent Guy Mulcaster went to 180,000gns for another son of Champs Elysees, Exoteric (GB), the winner of his last three starts for Charles Hills. Mulcatser and Waller have been successful in the past with Juddmonte graduates from this sale, including the Group 1 winners Foreteller (GB) (Dansili {GB}) and Stand To Gain (Ire) (Hawk Wing).

The Juddmonte horses––eight of which made six-figure sums––were a dominant force but there were plenty of other high points during a frenetic 12-hour session which posted an extraordinary clearance rate of 95%, with only 16 of the 302 horses offered failing to find a buyer.

Middle Eastern Buyers To The Fore
Qatar’s champion trainer Gassim Al Ghazali was back for more, warding off a number of challengers in the pursuit of Saturday’s G3 Horris Hill S. winner Pleaseletmewin (Ire) (Power {GB}) (lot 1028), including underbidder Alex Elliott, who had previously selected the gelding as a yearling for owner Richard Roberts at £36,000. Trained by Ralph Beckett to win three of his seven starts this season, Pleaseletmewin holds an entry for the G1 Breeders’ Cup Juvenile Turf but it is not yet clear that the son of freshman sire Power will make the trip to Santa Anita.

“He’s been bought for Sheail Al Kuwari who has lots of horses in training with me and we will discuss tonight whether he will go to the Breeders’ Cup,” said Al Ghazali, who had also bought the previous day’s top lot, Cloudberry (GB) (Pivotal {GB}) for 310,000gns.

He added, “Every year I spend a lot of time going through this catalogue and I pray that the horses I like have not been withdrawn by the time I get here. This was one we really wanted to buy and I decided that I wasn’t going home without him.”

Red Stable, the racing operation of Saudi Arabian Prince Faisal bin Khalid, made its presence felt through Ted Voute on Wednesday when signing up four colts and geldings to add to the one bought on Tuesday for a total of 842,000gns. The most expensive of these was the former Andrew Balding-trained Real Dominion (Cape Blanco {Ire}), a dual winner this year offered as lot 1149 with a rating of 95. The hammer fell on the 3-year-old at 350,000gns, and he will join another pricey recruit from the Juddmonte draft, Jorvick (Mizzen Mast) (lot 1107), who has won twice on the all-weather track at Deauville for David Smaga.

“He will go to Saudi Arabia with a target of the King’s Cup,” said Voute of the grey 3-year-old. “Horses need to be rated over 85 to go to Saudi. Jorvick has a strong US dirt pedigree, which is also appealing.”

Off to a different part of the Middle East is lot 1013, Above N Beyond (GB) (Exceed And Excel {Aus}), who is another to join the Anthony Stroud-selected team of Dubai Carnival challengers at 230,000gns. A 103-rated dual winner for Michael Owen and Andrew Black, the 3-year-old won a competitive mile handicap at Haydock on his most recent start for Tom Dascombe.

“He’s a nice horse and has made his money. It’s difficult to find horses of a suitable rating, in the region of 98, to go to Dubai,” said Stroud.

Another recent winner, on Oct. 22, is 4-year-old Laurence (GB) (Dubawi {Ire}), who was the headline lot (1070) of Luca Cumani’s Bedford Horse Stables draft. Co-bred by the trainer’s Fittocks Stud and Andrew Bengough of Arrow Farm & Stud, the half-brother to Listed Parramatta Cup winner Arab Dawn (GB) (Dalakhani {Ire}) was bought for 200,000gns to race on in Saudi Arabia for Prince Sultan bin Mohammed.

Top Jumps Yards Stock Up
With such international competition, some of Britain and Ireland’s jumps trainers have been finding it harder to buy staying recruits for the National Hunt field this week but Irish champion Willie Mullins landed a blow through his key buyer Harold Kirk, who went to 160,000gns for Stratum (GB) (Dansili {GB}) (lot 1036).

The colt was plucked from John Gosden’s stable, the same origin of Mullins’s six-time Grade 1-winning hurdler Nicholls Canyon (GB) (Authorized {Ire}) who was also a dual Listed winner on the Flat for Gosden when racing for his wife Rachel Hood and Elaine ‘Legs’ Lawlor.

Hopes will be high that Stratum, a winner over 10 furlongs and consisitently in the first three for seven of his eight starts, can follow a similar path, and Mullins will also take charge of the former Group 1-winning juvenile Epicuris (GB) (Rail Link {GB}) (lot 1110), who was bought from Juddmonte by Kirk for 140,000gns.

Another to be making a switch from the Flat and heading to one of Mullins’s arch rivals, Nicky Henderson, is the 98-rated 3-year-old Percy Street (GB) (Sir Percy {GB}) (lot 1178). The colt, who has won twice for Karl Burke and has been Listed-placed over a mile, was bought by Anthony Bromley of Highflyer Bloodstock for 160,000gns.

The final session of horses in training begins at 9.30am today with 214 lots set to come under the hammer.