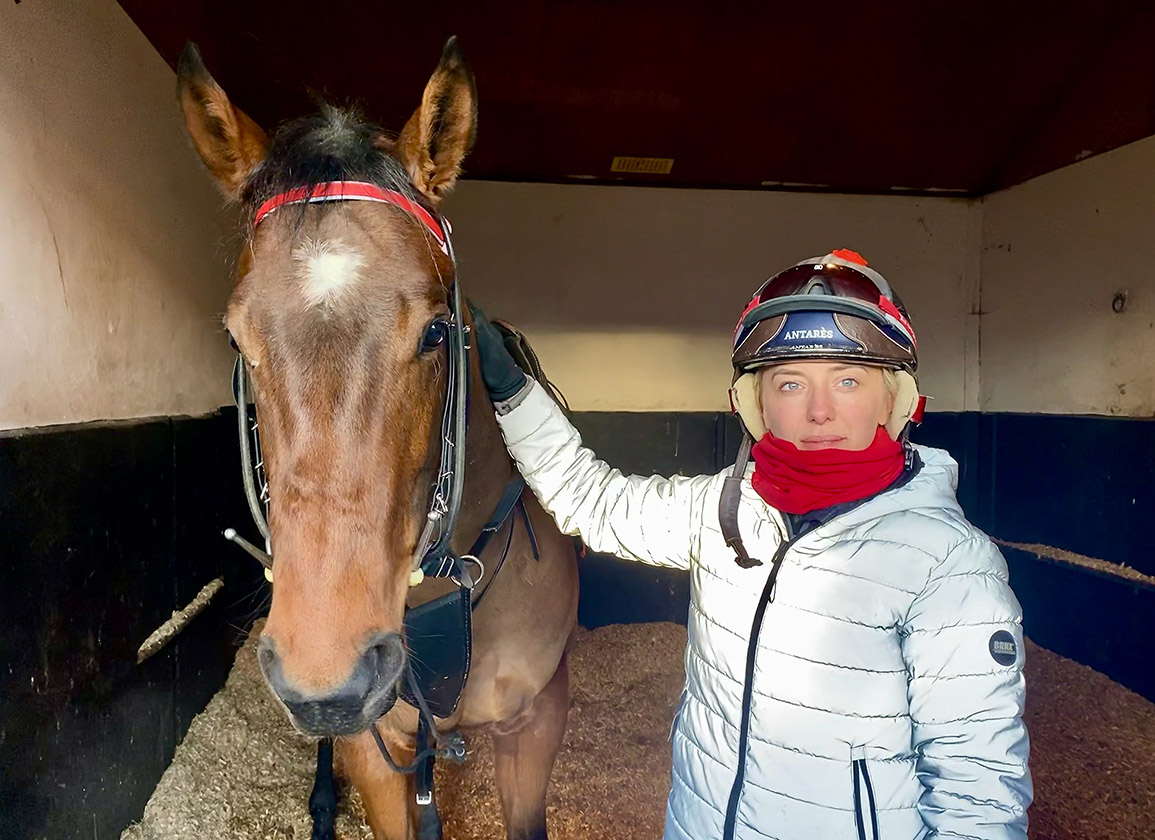 Alice Haynes with a juvenile colt by Kessaar | Emma Berry

It has been something of a whirlwind week for Alice Haynes. In fact, make that a whirlwind year.

On Saturday morning she arrived back in the UK from Dubai having overseen her first two runners there. By Friday she will be back at Meydan to saddle Freyabella (GB) (Kodiac {GB}) and Mr Professor (Ire) (Profitable {Ire}) again. In between that, Haynes has been riding out five or six lots a day on a cold and frosty Newmarket Heath at the head of a string which has risen in numbers on the back of a hugely encouraging start to her training career.

This time last year, the 30-year-old had not even sent out her first runner, but when she did, in late February, her aim was to try to get 10 wins on the board for the year. Come the end of December, she had notched exactly double that number. She already has three to her credit in this new year, all courtesy of the same horse, the sprinter Strong Power, who has notched a hat-trick and a second placing since New Year's Day. Plainly, Haynes is not afraid to run her horses when she feels they are ready for it.

“A lot of people look at the stats, so you are only really as good as your last runner, but I'm not afraid to run them,” says Haynes as she takes a short break between lots at her Cadland Cottage Stables, handily situated at the foot of Warren Hill. “I prefer to run them and get them on the track rather than give them one or two more gallops, that way you can really see what you've got. You can get excited about a piece of work but we all know there are plenty of morning glories who don't then do it on the racecourse.”

In these early days of her own career, the trainer has offered no such disappointment. Only three weeks after sending out her first runner she was in the winner's enclosure with Act Of Magic (Ire) (Magician {Ire}) at Wolverhampton, where Haynes had ridden her first of nine winners a decade earlier.

Since working for David Simcock and riding as an amateur when she first arrived in Newmarket after stints with National Hunt trainer Henrietta Knight then Mick Channon, Haynes ran her own pre-training business for a time. In that line of work in Newmarket she would rarely have been short on occupants, with many of the town's big trainers having large numbers in local pre-training facilities before they come into formal training. By last winter, however, Haynes had set her mind on preparing her own horses rather than doing so for other trainers.

“That was the creme de la creme and now I'm looking at it from a different view,” she says of the switch from breaking in yearlings by the likes of Dubawi (Ire) and Kingman (GB) to training more modestly sourced stock.

“But if you look at an owner like Nick Bradley, he tends to buy quantity over quality but he has found some superstars that way. Some people might go and buy five really well-bred horses but I think I would like to meet in the middle somewhere and not spend so much. Pedigree obviously counts for a lot, but at the same time it's the model of horse and what you do with it, and we've all seen those less expensive horses come out and win big races. That's the fairytale.”

Haynes has certainly made the most of the horses she has either bought inexpensively herself or been sent by owners who have noticed her early results. The aforementioned Nick Bradley is one of them, and Haynes is set to run Unique Cut (Ire) (Kodiac {GB}) for his syndicate at Lingfield on Saturday during the inaugural cross-code Winter Million meeting. Also on her list is the increasingly prolific Amo Racing, owner of the horse who so far holds the title of stable star, Mr Professor.

The first-crop son of Profitable won three races for Haynes last year, culminating in her first stakes success in the Listed Silver Tankard S. at Pontefract. He is now flying the flag for her yard overseas, and ran a promising third in last week's Jumeirah Classic Trial at Meydan. He steps up by two furlongs to return a week later in Friday's Derby Trial.

“He ran so well last week considering that it was his minimum trip over seven furlongs and he just lacks that extra half a gear but it was good to see that Rossa [Ryan] couldn't pull him up until he was over the far side and he has been bouncing ever since. He loves his racing and he takes it well,” says Haynes. “The owner said 'How are we going to beat Godolphin?' But the step up in trip will help us and if they don't turn up one day it's ours for the taking, and he still picked up prize-money for finishing third.”

Haynes is missing being able to ride 'Mr P' on a daily basis as she is used to doing, but she has her old friend and former Simcock colleague Laura Pike overseeing her horses in Dubai as she flits between there and home.

“I was there for their first day on the track and then stayed for their first races on the Friday, but obviously I have the 2-year-olds to get going here and Laura is there doing a great job for me so I don't need to be there all the time,” she adds.

Mr Professor was the first horse Haynes was sent by Kia Joorabchian of Amo Racing and she now has three juveniles to train for him, including a colt from the first crop of Kessaar (Ire), whose stock can be expected to be on the early side.

“We currently have 13 2-year-olds in, some very precocious ones and some which will need a little more time,” she says. “I've been lucky in that in the first year I was spending £5,000 to £10,000 myself on yearlings, but now some owners have come in and we've been able to buy four of five which cost £30,000, so it's taking a little step up the ladder and buying something with a bit more of a page.”

Very much a hands-on trainer, Haynes can be seen on a daily basis amidst her string, which also includes jockey Kieran O'Neill, who is in the stable every day.

“I love riding out because you learn so much more about the horses,” says Haynes, who rode to a decent level in eventing before turning to racing full time. “It's not just about them cantering past you, but it's more about how they behave the rest of the time, and that helps when you are then trying to get them to the track–whether it's a horse going to post first or last, or wearing a hood. It's the tiny things that make a difference.”

The more classical style of riding which she learned before coming into racing is clearly put to good use, as she adds, “Every horse gets treated on its own merits but a horse needs to be able canter on the right leg even as a yearling if you're going left-handed, or to register what leg he needs to be on to go round a bend, or even just carry himself properly when trotting. After a horse has had a break he will be in a bungee for a while just to make sure he's using himself properly and to build that top line. At the end of the day the strongest horses are the ones producing the best results.”

Haynes is already looking ahead to European targets for Mr Professor when he eventually returns from Dubai, and has the all-weather finals day or an Italian Group 3 pencilled in as his spring engagements.

“There are some decent options for him early on in the season, so he can kick on off the plane and keep going,” she says. “To have something on the international stage at this time has been great. I wouldn't be afraid to go to places, especially if you are trying to get black type for fillies. I'd love to try to attack France, Ireland, Germany, Italy next season.”

Such ambitions, along with the results, will increasingly turn the spotlight on the young trainer. Her composed and lengthy interview on last week's Luck On Sunday appeared to show someone at ease with this situation but Haynes says, “I'm quite a level-headed person and I don't really like the attention on me. I just like to get on with it and do my job. I've set the bar relatively high and I have to keep increasing it. It's such a competitive sport and you are only as good as your last runner.”

As all trainers know, horses can disappoint as much as they delight, but Haynes's promising first year with a licence has already proved that she is a more-than-competent horsewoman, and better still one for whom hard work is second nature.