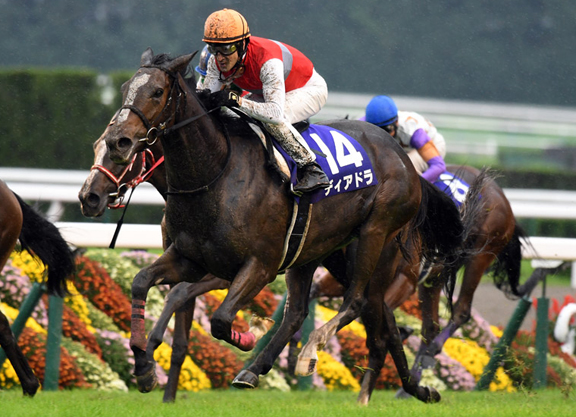 The G1 Shuka Sho, the third leg of the Japanese Triple Tiara, went the way of 5-1 third choice Deirdre who was claiming her first Group 1 win at Kyoto Sunday. The daughter of English highweight and G1 King George VI & Queen Elizabeth S. hero Harbinger rallied late to win by 1 1/4 lengths over Lys Gracieux, with Mozu Katchan a nose back in third.

Fourth last through the early going, Deirdre began picking off horses shortly after the leaders covered the first 1000 metres in :59.10. Making in roads up the fence turning into the straight, Christophe Lemaire steered Deirdre back to the four path and she closed in determined fashion with 200 metres to travel and kicked away to victory. Lys Gracieux let down well and mirrored the winner's course, but couldn't quite deliver late.

was to go out there and run–and I was quite confident going into this race,” commented Lemaire. “Her break wasn't good and we had to race further back than we had hoped, but the pace was fast which worked for us and she gave a terrific run in the stretch.

A ¥21,000,000 yearling purchase out of the JRA July Sale in 2015, Deirdre was off the mark at third asking at Niigata exactly one year ago Sunday. Deirdre failed to win in three more juvenile appearances, but did place third in the G3 KBS Kyoto Sho Fantasy S. in November. Runner-up in the Listed Anemone S. second out in February, the Northern Farm-bred was only sixth in the G1 Japanese 1000 Guineas in April, but returned to the winner's circle in the Yaguruma Sho going 1800m at Kyoto May 7. Fourth in the G1 Japanese Oaks May 21, Deirdre was given some time off and resumed with a victory in the HTB Sho Aug. 13. She added the G3 Shion S. at Nakayama in short order most recently Sept. 9.