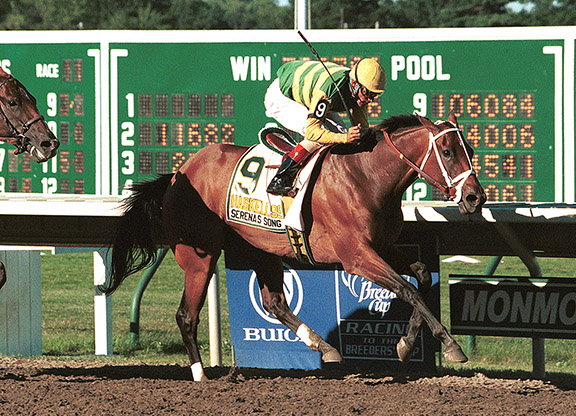 Serena's Song won the Haskell a quarter-century ago | Equi-Photo

Farm tours may have ground to a halt in the wake of the COVID-19 pandemic, but that hasn't stopped Horse Country, central Kentucky's Thoroughbred industry tourism arm, and its partners from connecting with fans. While those of us in the business know that nothing beats getting visitors onto a farm and hands-on with horses, some of the Bluegrass's biggest operations are doing the next-best thing: bringing the tours to the fans virtually through platforms like Facebook and Instagram Live.

Denali Stud a week ago hosted its first virtual tour, taking fans on a walk through its foaling barn, and on Wednesday Craig and Conrad Bandoroff hosted a birthday party for farm matriarch Serena's Song, who turns 28 on Saturday.

“We're trying to keep up our Horse Country engagement and trying to offer people some respite in these tough and uncertain times,” said Conrad Bandoroff. “We did our first one last week and it went well. Our Director of Sales Sarah Fishback walked through our foaling barn so we got to see some mares and foals that were up and in the stalls, and she walked out to a round pen and talked about how our foaling unit operates, what the foals' schedules are, what their routine is. And she did a great job of answering people's questions as they came in.”

That tour was streamed on Instagram Live, and has received 1,500 views in the past week after being reposted on Facebook.

“That was a lot of fun and we really enjoyed it, so we put our heads together and came up with a plan for some more virtual tours over the next several weeks,” Bandoroff said. “Serena's Song is one of those, and we're planning to do a Q&A with our farm managers Gary Bush and Donnie Snellings and a few other people. We'll do a yearling tour-we're just trying to do something different so each time people tune in it's something new.”

Wednesday's tour with Serena's Song began with the Bandoroffs providing some background on the mare, including a discussion of her race record and some of their favourite performances of hers, and recollections of her early days as a broodmare at Denali.

As Serena's Song was led out by Assistant Broodmare Manager Radhika Clark-complete with a white birthday sash around her neck-Craig shared with fans her adoration of peppermints.

“Serena absolutely loves peppermints,” he said. “We can thank Wayne Lukas for that; from the day she arrived she's been a peppermint-eating fool.”

Conrad talked about Serena's routine these days–“she's outside most of the time. She might stay in during inclement weather but overall she's treated as a horse”-while Craig shared some stories highlighting the tough personality that makes The Queen of Denali.

“One time I went down to see her just after she'd foaled, and I was in the stall with her and the foal,” he recalled. “I dropped something and bent over to pick it up, and she went after me. She ruined a very nice coat, but I'm just glad it wasn't my head.”

Farm Manager Gary Bush later joined and talked about how before coming to Denali he worked at Three Chimneys Farm with Serena's sire Rahy the year she was conceived. The Bandoroffs and Bush talked about Serena's three daughters and granddaughter on the farm, which are all still part of the Lewis family's breeding operation. After enjoying her share of mints, Serena's Song was presented with a horse-friendly birthday cake.

“It's amazing how many fans she still has to this day,” Conrad said. “How much her halters that we donate every year to various charities, the amount those still generate for those charities. Throughout the year and for her birthday she's always receiving gifts, peppermints from fans and birthday presents. We're really excited to share her birthday with everyone.

“Serena's Song has meant a lot to me and my family and we know she's meant a lot to a lot of people, and we know it's our responsibility to share her with people. That's something we enjoy doing and this is a great way to do that on a larger scale.”

If you missed Serena's Song's virtual birthday party, you can catch it on Denali Stud's Facebook page.