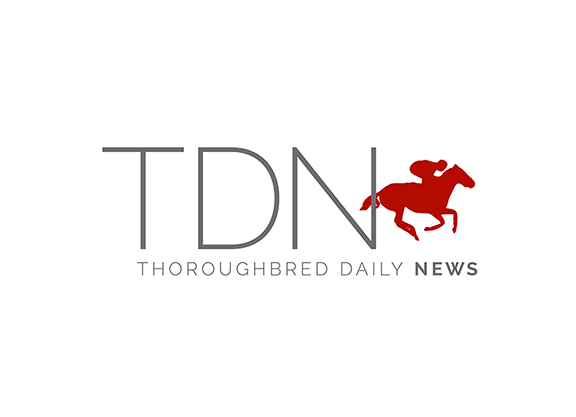 The under-tack preview of the Barretts May Sale of 2-Year-Olds in Training and Horses of Racing Age was held under a sun-dappled sky at Del Mar Racetrack Wednesday, with a filly by Hansen recording the fastest furlong time of :9 4/5 and a colt by Speightstown turning in the fastest quarter-mile breeze of :20 3/5.

“Everything went very well–it was a beautiful day and conditions were perfect,” reported Del Mar General Manager Kim Lloyd. “The track was exactly the way it was in March. We're very pleased with the condition of the track. And turnout was great today. Everything was very top notch.”

Hip 107, a filly from the first crop of 2011 champion juvenile Hansen (Tapit), became the first horse to shade :10 with her :9 4/5 work during the third of three sets Wednesday. The chestnut, consigned by Adrian Gonzalez's Checkmate Thoroughbreds, is out of Sararoyal (Royal Academy), a half-sister to stakes placed Gladiator Queen (Great Gladiator) and from the family of Canadian champion Fatal Bullet. The juvenile RNA'd for $40,000 at last year's Fasig-Tipton Kentucky October sale.

“She 's a pretty special filly,” Gonzalez said of the bullet breezer. “We knew she was fast, but I've never had a :9 4/5, so I wasn't expecting that.”

The filly was prepped for the May sale in Ocala.

“She got ready at Crupi's [New Castle Farm],” Gonzalez said. “I've only had her for a few weeks, so he gets all the credit. I just tried not to mess it up.”

Checkmate Thoroughbreds had five juveniles work at Del Mar Wednesday. In addition to the bullet work, the operation was also represented by a :10 flat work by hip 98, a daughter of Grade I winner Tiago.

“I'm really pleased with how the whole day went,” Gonzalez said. “I'm proud of my whole group–they all worked well.”

A total of 11 juveniles shared the preview's second-fastest furlong time of :10 flat.

A colt by Speightstown (hip 99) turned in the fastest quarter-mile breeze of Wednesday's preview, zipping the distance in :20 3/5. Consigned by Raul Reyes's King's Equine, the youngster is out of graded stakes winner Reunited (Dixie Union). The dark bay will be making his second sales appearance of the season; he worked a furlong in :10 flat before selling for $100,000 to Rockingham, agent, at the OBS March sale. He has two recorded works at San Luis Rey Downs this month, most recently going three furlongs in :36.40.

A colt by Super Saver (hip 45) put in the day's second-fastest quarter-mile, completing his work in :21 flat. Consigned by Bruno DeBerdt's Excel Bloodstock, the youngster is out of the unraced Golden Desert (Vindication) and from the family of Desert Stormer, Sahara Gold and Better Lucky.

The Barretts May Sale will be held Friday, with bidding scheduled to begin at 1 p.m. PT.