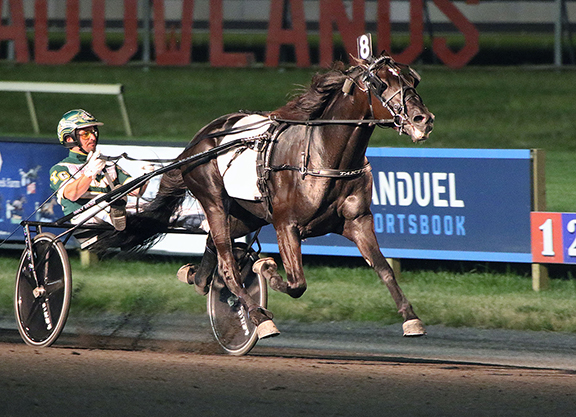 One of the favorites for Standardbred racing's ultimate prize has significant connections to the Thoroughbred world.

Ready For Moni, the 3-1 morning line second choice in Saturday afternoon's $1 million Hambletonian at the Meadowlands, was bred by the Moni Maker Stable's Frank Antonacci and David Reid, the principals behind Thoroughbred racing's Ice Wine Stable that has campaigned such stars at No Nay Never, now standing at Coolmore Stud in Ireland, and this year's promising 2-year-old Fauci (Malibu Moon).

Reid is also the owner of Preferred Equine Marketing, a dual-breed sales agency that has its roots in the Standardbred world. Antonacci, one of the owners of family-operated Standardbred nursery Lindy Farms based in Connecticut, is also an owner of the famed Lexington harness track the Red Mile, as well as the GreatHorse golf club in Hampden, Massachusetts. Antonacci's son Philip serves as the Director of Sales for Preferred Equine's Thoroughbred division. Long the largest consignor of Standardbreds, Preferred Equine made their Thoroughbred debut in 2013 with a yearling consignment at the Fasig-Tipton Saratoga New York-bred sale, and have been increasing their Thoroughbred footprint ever since.

Ready for Moni was sold for $220,000 at the 2018 Lexington Selected Yearling sale, and was purchased by John Fielding and partners. Lindy Farms retained a piece of the colt, one of two Hambletonian elimination winners on Saturday, Aug. 1. The Toronto-based Fielding is another well-known name in both breeds. Fielding has bred numerous graded stakes winners in the Thoroughbred game with partner Fred Hertrich, including GI winners Catholic Boy and Diversify. The pair own around 100 mares at Hertrich's Watercress Farm in Lexington.

Ready For Moni is also owned by Herb Liverman of Florida and Bud Hatfield of Ohio.

A victory Saturday by Ready For Moni would also give the Antonacci family a record sixth Hambletonian triumph. Different combinations of the Antonacci clan have won the Hambletonian with: Lindys Pride (1969), Speedy Crown (1971), Probe (1989), Harmonious (1990) and Victory Dream (1994).

A win would also be a significant breeding triumph for the Moni Maker Stable. Ready For Moni is the result of its efforts to successfully blend French and American trotting blood to produce a superior Standardbred. In the harness racing world, it is still relatively rare for a North American mare to be bred to a European stallion or vice-versa.

Ready For Moni is a son of French stallion Ready Cash out of Nothing But Moni, a daughter of the famed American-bred Moni Maker, who earned nearly $5.6 million in her racing career competing both in North America and Europe.

The Hambletonian post time is 4:35 p.m., and will be aired on a tape-delayed basis on the CBS Sports Network in a program beginning at 6 p.m.