Halford Back For More Dubai Gold 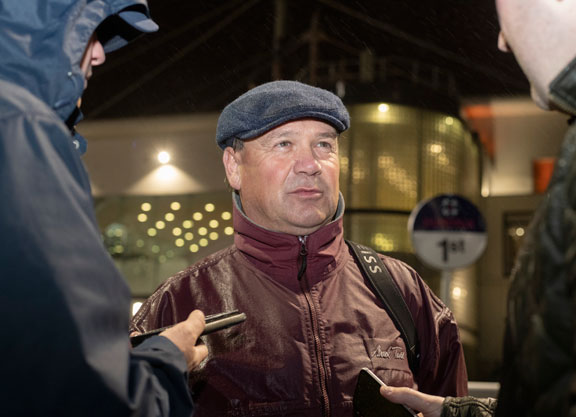 Mick Halford is a familiar face at Meydan, with a victory in the G2 Dubai Gold Cup in 2014 with Paul Rooney’s Certerach (Ire) (Halling) being among his highlights, and the Kildare-based trainer gets his 2020 carnival season underway on Thursday with a pair of stakes runners at Meydan.

The lightly raced 4-year-old Simsir (Ire) (Zoffany {Ire}) lines up with a shot in the Listed Zabeel Turf, although he will have to see off last season’s G1 Jebel Hatta winner Dream Castle (GB) (Frankel {GB}) among 10 rivals. The Aga Khan-owned Simsir broke his maiden first out over this trip at Cork last September and followed up with a conditions score at Dundalk 20 days later. He warmed up for this with a head second in a Dundalk handicap on Dec. 20.

“He’s lightly raced and was quite a big horse who took plenty of time to mature and come to hand,” Halford said. “He won his first two races and I said that maybe we would bring him here, so we freshened him up and gave him a run before he came out. He finished second and we were delighted with him because he needed that for experience. When he won his maiden he won in good style, but didn’t learn a whole lot. His second outing was on the sand in Dundalk and he went around quite comfortably as well, so he has come on from this experience.

“He’s a horse we thought had a good profile for Dubai. He has a great constitution and good attitude and he’s a horse who loves good ground and is an improver. I think there’s more to come from him. He’s a beautiful-moving horse.”

Halford saddles the 7-year-old mare Surrounding (Ire) (Lilbourne Lad {Ire}) in the G2 Cape Verdi S. over a mile on the grass. Surrounding didn’t show her age in the slightest last year, finishing off the board just once in nine outings and winning four stakes headed by the G3 Brownstown S. at Fairyhouse. She won the Listed Irish EBF Cooley Fillies S. at Dundalk on Nov. 1 by 2 3/4 lengths.

“She had a wonderful season and we’re delighted with her,” Halford said. “She has won five listed races in the space of 12 months and a Group 3 at home. She has age on her side and is again a filly who just kept improving. I had this race in mind for her for a long time and we’re pleased with her.

“She’s travelled out well and is training well, but she’s very straightforward and has that experience. She’s at her best on good ground–seven furlongs to a mile is good for her and taking on her own sex will be good for her. I’m quite hopeful.”

Among Surrounding’s Cape Verdi rivals is Magic Lily (GB) (New Approach {Ire}), Charlie Appleby’s 5-year-old daughter of the G1 Investec Oaks winner Dancing Rain (Ire) (Danehill Dancer {Ire}). Magic Lily broke her maiden on debut at two by eight lengths before finishing third in the G1 Fillies’ Mile, but was absent all of 2018. She resumed late last year with a second in listed company in France before checking in sixth in a listed race at Lingfield on Nov. 16.

“She sustained an injury there in the early part of her 3-year-old career and that’s why she missed [2018],” Appleby said. “We were very happy to get her back on track for her reappearance in France, where she put up a respectable effort. I was a bit disappointed, but we sort of potentially knew our fate there in her last start because she was drawn wide at Lingfield. She didn’t do it the right way around, therefore we knew it was always the plan to come here.

“The trip will be on the sharp side for her on Thursday, but it’s hopefully a nice prep for her into the [G2] Balanchine [S. on Feb. 13]. Her preparation has gone well, so we’re looking forward to seeing her next start on a nice conventional track like Meydan. She’s in good order and should put up a decent performance.”