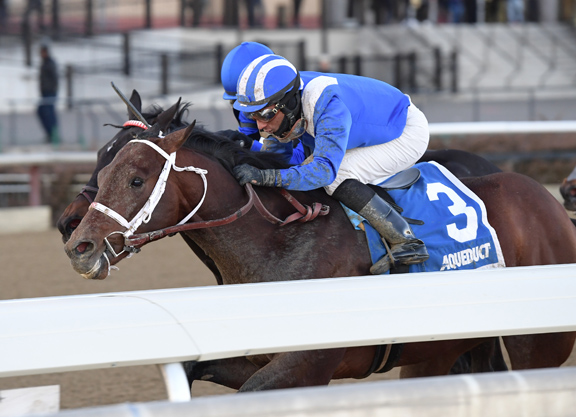 “He looks great,” said McLaughlin. “He appears to have come out of the race well and I have to say that [assistant] Joe Lee and our team in New York have done a great job with him.”

McLaughlin said he will point Haikal towards the Apr. 6 GII Wood Memorial S. At Aqueduct for his next start. The nine-furlong Wood will see its purse increased from $750,000 to $1 million if a Grade I or Group 1 winner is declared an official starter.

“Moving forward, going two turns in the Wood is the next logical spot,” said conditioner Greg Sacco. “He has the tactical speed to be forwardly placed and we know he doesn't need the lead. I think he'll be able to settle, and if it's a paceless race he can make it. What we learned yesterday is a real big plus for Mind Control. We were really proud of him. He ran a dynamite race and Kiaran's horse ran an exceptional race. It was a fun race to watch and we're really happy with how he ran.”

Gotham third-place finisher Instagrand (Into Mischief) finished evenly after chasing a hot pace in his first start since capturing the GII Best Pal S. at Del Mar in August.

“It was a very good effort off the long layoff-we're very pleased,” said trainer Jerry Hollendorfer. “It showed a different dimension and that makes it all the much better.”

Hollendorfer said he has yet to decide on a next start for Instagrand, but noted that “we're nominated all over the country.”