Haggas Hoping For Rain Down Under 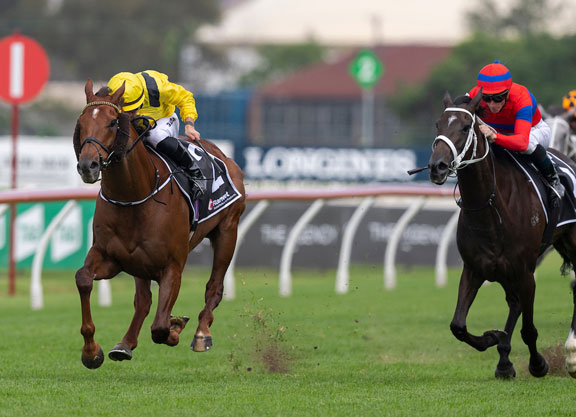 Trainer William Haggas said his team in Australia is “really happy” with G1 Champion S. winner Addeybb (Ire) (Pivotal {GB}) ahead of the 7-year-old's defense of his G1 Queen Elizabeth S. title at Randwick on Saturday, and that he thinks some rainfall will help the gelding turn the tables on star local mare Verry Elleegant (NZ) (Zed {NZ}), who beat him first up in the G1 Ranvet S. on Mar. 27, which Addeybb also won last year.

“They are really happy with him, but we could do with some rain. I've seen differing forecasts,” said Haggas. “I think there's improvement in him, I just don't think he went through his last race with any gusto whereas normally he's a very strong traveller. He still fought in the straight, but it took him an age to get by the leader where usually he zips by and says to the others 'come and get me'. Tom [Marquand] said he was rusty and I thought the foot [an injury scare shortly before the race] affected him. He very nearly didn't run, but he was improving all the time so he did run.”

Addeybb, too, will have an equipment change on Saturday.

“We're putting a pair of half-blinkers on him which I've been wanting to do for a bit,” Haggas said. “He's had cheekpieces on a while now. Tom rode him the other day in blinkers and said he felt much sharper, but I said he would do because his feet are fine and he's had a race so he will be sharper. I did say to him though, it was his call, I'm 12,000 miles away and if you want to put them on then do so. We do need rain, though, because he's not as good on good to firm.”